Someone Finally Found a Good Use for Transparent Displays 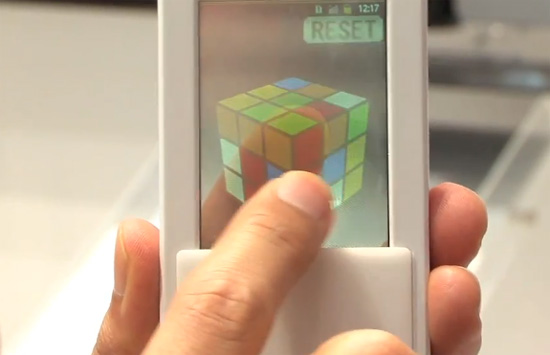 Transparent displays have been around for a while now, but besides looking cool we’ve seen few practical applications that take advantage of the see-through screens. That might be changing with this smartphone concept from NTT DoCoMo and Fujitsu, which presents users with some pretty novel ways to interact with their screens. However, it’s still far from perfect.

Though it’s just a small mockup, the display presents some unique features. Not only is it transparent, but both sides are touch sensitive. This means that users can interact with their phone while not completely obstructing the screen — a challenge that smartphone app developers are currently struggling with, especially for games.

The model also supports simultaneous input from both sides of the screen. This allows the user to pick up an icon, and manipulate the screen around it. In a demo of the device, they also showed off how it could be used to play a Rubik’s Cube game, where one side controlled horizontal motion and the other side controlled vertical motion. Masashi Tagaya, quoted by DigInfo, explains:

You could hold down an icon on the front, and slide on the back to move an icon, or use the message bar, or create a new application. For example, from the front, you can only move the whole Rubik cube like this, but if you slide your finger across the front while holding down the back, you can rotate just one face. So this display makes gripping operations possible.

While these are thought-provoking examples, the display still seems problematic. Seeing it outside in sunlight, and other scenarios frequently presented to mobile phone users, would probably render the dim screen unviewable. Moreover, the two-sided display requires two-handed interaction. One of the great triumphs of iOS, for example, is that you can use it entirely one-handed.

The researchers behind the device acknowledge that it’s still a long way from being market ready. However, it’s refreshing to see people coming up with truly unique ways to use transparent displays, despite the inherent impracticalities.