Samsung Smart Window is Like a Giant Transparent iPad 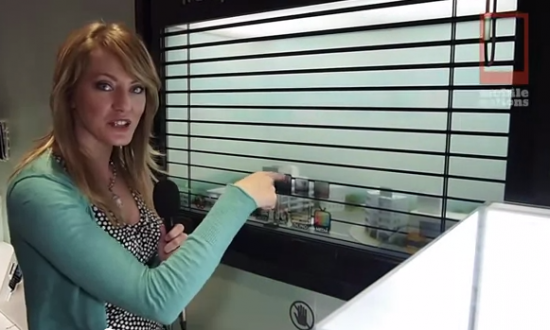 Whenever you’re cruising through CES announcements and demos, you’re always looking for that one thing that ignites that spark of excitement in your chest, lights up your eyes, and makes you realize that we’re living in the future. Well, the Samsung Smart Window will deliver. The Samsung Smart Window is a window, but it’s a display. It’s a giant transparent touchscreen you can use as a window. It’s a see-through, window iPad. It’s amazing.

It only takes a few features to drive home how crazy this technology is. For instance, it comes with a blinds app. If you activate it, you can slowly open and close the digital blinds and affect the amount of actual light that comes in. It’s also a one-way mirror, meaning that you don’t have to be afraid of passersby seeing you or what’s on your screen; they’ll only see themselves. As if all that wasn’t enough, because the Samsung Smart Window doesn’t need backlight units (it uses natural light for that), it uses about 1/10th of the electricity that a standard LCD display its size would use. And in the dark, it has transparent backlight units you can use at the cost of a little more power, so you’re always covered.

Now, this is doubtlessly awesome, but there are a few questions to be raised about its application, most of which lead back to its presumably high price tag. First off, if you use this as a window, it’s going to be exposed to the outside world. Remember having to do a week’s worth of chores to pay back the cost of a broken window after a wild foul ball? Imagine years of indentured servitude ahead.

Secondly, how much use are you really going to get out of staring out the window and using it as a touch screen? Chances are you already have more portable touchscreen devices than you could possibly need or want. On top of that, reaching up to use a vertical touchscreen could be awkward and tiring if you do use it a lot. Tom Cruise reported being sore after filming the UI sequences in Minority Report, so you might get sore living them, and probably pay a pretty penny for it too.

All that aside, how amazing is this? A huge, transparent, one-way mirror touchscreen and it’s going into mass production in just a few months. We are living in the future. And while you may not want to actually shell out for one, it’s a least a great piece of tech to lust after.