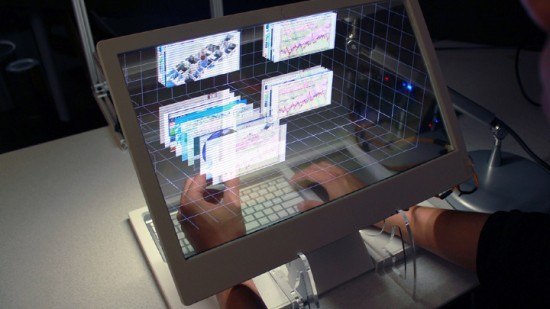 Sure we’ve got our futuristic tablet PCs and 3D televisions and body-tracking cameras, but this “future” we’re living in still seems a little lacking. Maybe it’s because the present is always boring or maybe, just maybe, it’s because there isn’t any widely available, consumer-grade, holodeck-style technology out there. Probably the latter. The See-Through 3D Desktop developed by Jinha Lee and Cati Boulanger, former intern and researcher respectively, at Microsoft Applied Sciences gives the old desktop PC a striking VR twist, but its not consumer-grade. Yet.

The prototype device uses a Samsung transparent OLED screen as a monitor, and shifts the keyboard behind the screen, a little like some sort of inverted desktop. This allows users to type on the keyboard, but also lift their hands to manipulate objects on the transparent monitor from behind. Depth sensitive cameras assure that this manipulation is in true 3D and, as a cherry on top, the monitor also tracks head movement so that the user always gets the appropriate perspective. This creates the faciniating illusion that one is looking into a sort of cyberspace box.

Of course, there are a few caveats with the design that look like they could use a little ironing out. First off all, the way the user’s hands fit under the laptop screen seems moderately restraining at best. At worst, it seems similar to having your hands put in the stocks. Speaking of hands, this is probably going to be hard to use if you aren’t a perfect touch typist, depending on the opacity of the display. If it’s transparent enough, it might actually help you cheat and look at your hands, but if it’s set to a high opacity (a setting at which it would probably look best) it’s going to be like typing blind. Granted, it’s not like touch typing is some kind of mysterious lost art.

All in all, the set up doesn’t seem ridiculously practical, but neither does it seem plain ridiculous. There’s a reason we’ve been tending towards physical touchscreen UI: Inertia. It’s a self-perpetuating sort of thing. It’s good to have things shaken up. You probably aren’t going to see this kind of see-through desktop interface in your home any time soon, if ever, but who knows? Maybe playing around with this will help us uncover the next big advance in UI. Also, it has the benefit of looking like a hologram, and I think we can all agree that hologram technologies can never have too much attention devoted to their development.