Transgender Day of Remembrance: 2017 Was the Deadliest Year on Record for Trans People 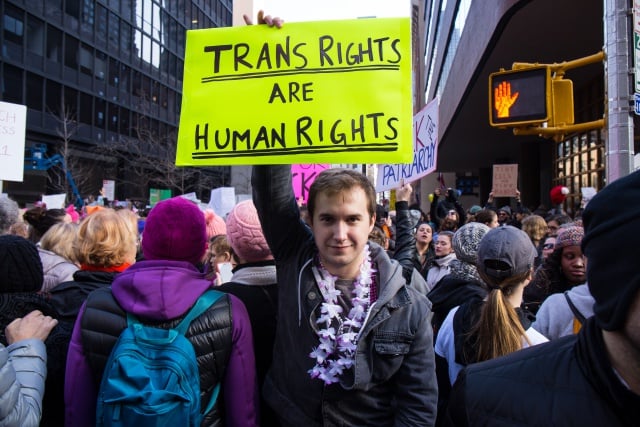 The transgender community has gone through a series of social victories and losses this year. 2017 saw the election of Virginia Democratic candidate Danica Roem, an openly transgender woman, Trump’s completely and utterly wretched ban on transgender soldiers was blocked, and Ryan Murphy’s upcoming show, Pose, will provide an unprecedented opportunity by starring five trans actors.

However, we have a president who wants to ban transgender people from military service via Twitter proclamation, Jeff Sessions removed rights for trans workers, and the Marsha P. Johnson documentary issue proved that we still have a hard time getting trans stories told by trans people. Not to mention in this year, 25 trans people have been murdered, the deadliest year on record, according to The Daily Beast.

November 20 was declared “Transgender Day of Remembrance” in 1999, by Gwendolyn Ann Smith, to memorialize transgender victims of murder after she was moved by the story of Rita Hester, a black transgender woman who was stabbed in the chest 20 times inside her Boston apartment in November 1998—a murder that remains unsolved to this day.

The youngest victim this year was 17, and the oldest was 59.

At all sectors of society, from comedians who claim to be progressive to the average joe, people struggle to “understand” trans people, and when failing, decide to respond with ignorance and hatred. They think it’s funny to joke about killing trans women, make quizzes called “shemale or female,” or act as though intentionally misgendering someone is comedic instead of hurtful and cruel. Too many have used confusion or lack of knowledge to excuse the real issue: hate. Because a lack of understanding does not mean you have to strip trans people of their human rights and murder them brutally for doing nothing but living their truth.

So today, we remember those who were taken from us this year:

Today is Transgender Day of Remembrance – a day in which the trans community remembers those who have been killed in the past year.

Worldwide, a trans person is slaughtered every 3 days. The victims are primarily trans women of colour and gender nonconforming people of colour.

Today is #TransgenderDayofRemembrance & the Trans Pride Flag flies over #TorontoPolice HQ for the 1st time. We spent one minute in silence for those who lost their lives to prejudice & hate. #tdor #tdor2017 #LoveWins pic.twitter.com/imtiCqEa1j

On #TransgenderDayofRemembrance, we respect the strength and resilience of trans, gender diverse and non-binary people pic.twitter.com/OQRpEoZ40S

It’s #TransgenderDayOfRemembrance. Today we honour those who lost their lives to anti-trans violence & discrimination.

We think of those who live every day in fear because they are seen as ‘the other’, & mourn together that there is still a long & dangerous road ahead.#TDOR pic.twitter.com/5lPzu72jQy

This powerful film about being a young trans person is a must-watch #TransgenderDayOfRemembrancehttps://t.co/41SboTJ2CL pic.twitter.com/hmsFXaVeT7

Today is #TransgenderDayofRemembrance, a sobering reminder that #transphobia and violence against transgender people is an all-too-real experience for many both in Australia and worldwide. #tdor2017 pic.twitter.com/AKzsXLbVq1

Today we remember the lives of transgender people lost this year due to hatred. You are not forgotten. #TransgenderDayofRemembrance #TDOR pic.twitter.com/cDZaL9TriA