When there was a changing of the creative team in Batgirl earlier this year, many readers asked, “What will happen to Alysia?” Batgirl’s roommate, created by Gail Simone, made headlines across the internet when she confided to her Bat-roomie that she was trans. Discussions sparked around how the depiction of Alysia would represent trans people: Would Alysia become a trope and fall victim to the ways that trans women have been previously characterized in media?

Visual Representation is a new three-part series that will examine some of the trans characters that have appeared in comic books, manga, and webcomics. In this first entry, Tash Wolfe examines trans women’s representation in The Sandman and Batgirl.

The trans women of our dreams

Neil Gaiman is one of my favourite storytellers of all time. I love to daydream of what it would be like to be a fallen star, like in Stardust, or to find my way to the Other World while donning a blue wig and orange pyjamas (which I wore for Hallowe’en years ago when I dressed as Coraline). Gaiman is known for his support of feminism, recently through his questioning of the gender disparity in Doctor Who, and has a large following of admirers in The Mary Sue community. I just want to say, Neil, I forgive you – but we need to talk about the mistakes that you made in The Sandman.

I first read The Sandman series in the mid-1990s and, like all goth girls, I dreamed of kissing Dream. This was in a world before Laverne Cox, when trans woman tropes – “dead trans woman,” “man in a dress” – were commonplace and almost expected. (These tropes still do exist, but people who aren’t trans women are finally talking about them!) When I decided to re-read the series last year, I was warned about the trans-misogyny and how the characters were portrayed. Still, many trans readers love the character of Wanda, who was even named one of the top LBGT comic book characters by Gay-Nerds.Com because of her compassion and loyalty to her friends.

Before we visit Wanda, however, let’s go to “Collectors” (issue 14, from The Doll House). The story follows two characters to a hotel that is hosting a convention for serial killers. The serial killers like to collect a physical or spiritual part of their victims after their kill. While mingling, one of the attendees, nicknamed “The Connoisseur,” shares information about his collection of trans women who have not had transitional surgery. “There’s something about preoperative transsexuals that makes the connoisseur uncomfortable,” writes Neil. “Something brittle and bright in the back of their eyes. He loves them. But he always feels they’re laughing at him.” 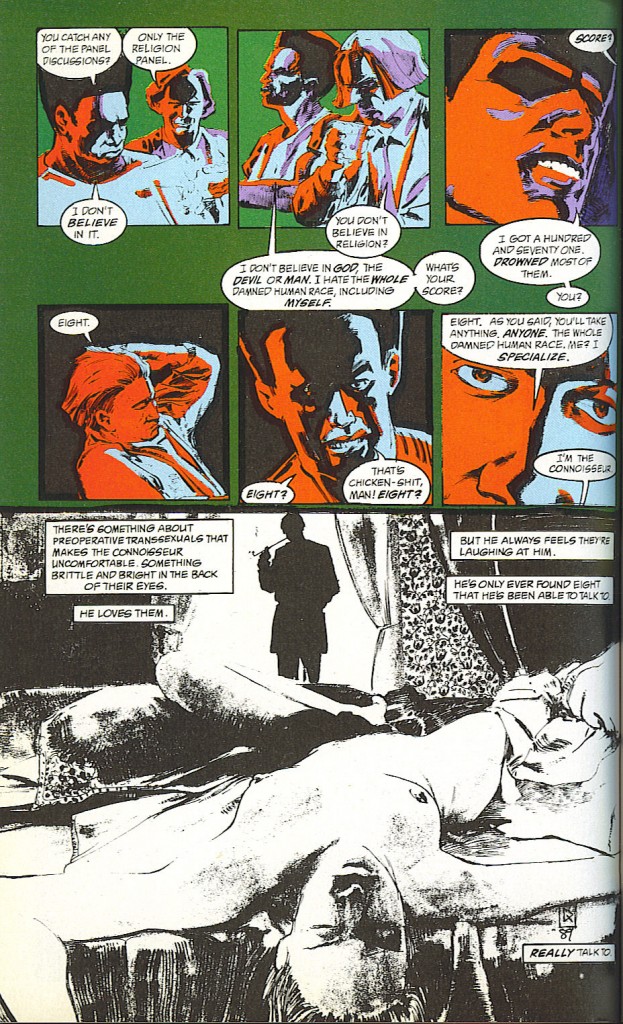 This example of the “dead trans woman” trope could have been lifted right from the case files of Olivia Benson and Law and Order: Special Victims Unit. (… Still forgiving you, Neil, as you wrote this almost twenty-five years ago. We all make mistakes.) At first, I thought that this was the depiction that I was warned about. But then, I met Wanda.

Wanda is introduced in issue 32, at the beginning of the collection A Game of You. This story revolves around Barbie, a character who is no longer able to dream and her neighbors: a lesbian couple named Hazel and Foxglove, a witch named Thessaly, and Wanda. Although Wanda’s trans identity is not discussed until partway through the issue, there are many guiding clues. Wanda is depicted as much taller than the other female characters. Her face is angular and her shoulders are broad in comparison. Her outfit could be found worn in the world of survival sex work, which conjures further stereotypes about trans women. As she walks down the stairs, her neighbor George gives her a long glare that drips with discrimination.

Wanda’s trans identity is revealed to the reader through a disclosure to Barbie of her old name, the name that she was born with. Wanda shares about parents who likely tells their friends that their child is dead, and about an aunt who prays for her. Wanda dreams of dresses before quickly falling into a nightmare. Her body becomes muscular and her hair short. She is bound to a gurney by a man who asks her if she is a man or a woman and tells her that surgery would “make her better.” These scenes highlight the “man in a dress” trope as though Wanda’s femininity is something artificial that can be applied and stripped off. As well, it illuminates the false belief that a trans woman only stops being a man after she has surgery. In reality, surgery is not a goal for many trans women, and it is not an attainable goal for many of the women who wish for it. While Wanda is dreaming, Barbie falls into a coma-like dream-state and Thessaly realizes that George is to blame. Thessaly kills him and gathers the women into his apartment, with Wanda carrying Barbie’s unconscious body. Thessaly invites Foxglove and Hazel to travel to Barbie’s childhood dream land and save them, while Wanda is told to say in the apartment to watch over Barbie’s sleeping body. Thessaly asks Hazel for her menstrual blood to call down the moon in a spell. Hazel asks why her blood is needed and one of the reasons that Thessaly gives is, “Wanda is a man.”

This exclusion causes Wanda to question that she might not be the woman that she thought she was. These thoughts are reinforced by George’s re-animated head which tells Wanda that she was left behind because she is “a man” and that the spell was “a women thing.” George goes on to school her on what makes a woman – chromosomes, how “the operation” wouldn’t make a difference, and tells her that gender isn’t something that you can pick and choose as far as gods are concerned. Wanda is again forced to reassert herself as a woman, telling George that she knows who she is. 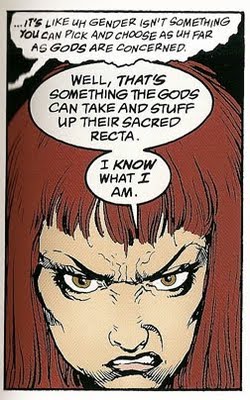 Later, when Wanda leaves the apartment, she continues to defend her gender. A stranger on the street asks her if she is “a guy or a girl,” and then tells Wanda the story of how her grandchild transitioned and was murdered.  This seems to be a reoccurring theme in The Sandman. Barbie is saved (during a long story that has nothing to do with our beloved Wanda), but the rescue causes a storm that kills Wanda. This allows Barbie to become the ally. She attends the funeral, where Wanda’s body has been de-transitioned by her family to that of a man with short hair and a suit. Barbie, in a heroic moment nonetheless framed in privilege, uses lipstick to cross out the birth-name on the gravestone and writes “Wanda.” 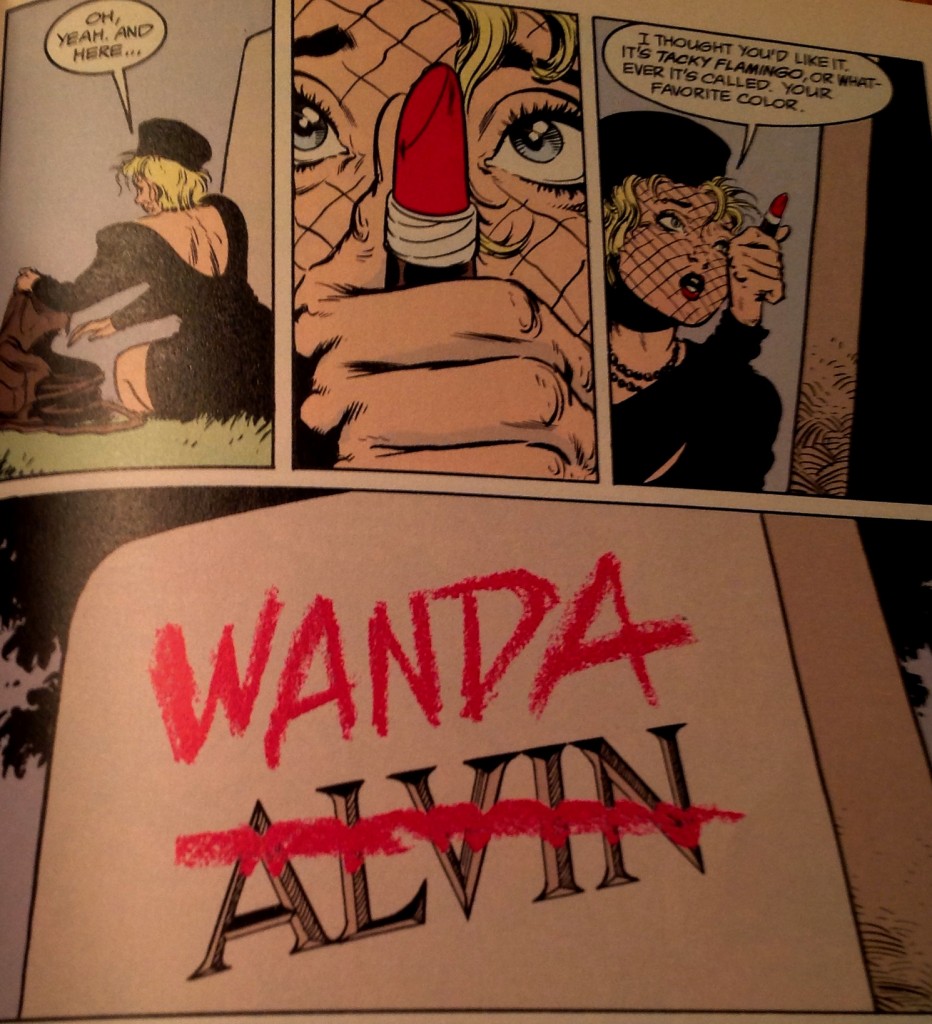 Later, Barbie dreams of Wanda, but Dream Wanda looks different. The angular features on her face have softened. Her height and stature have reduced. The Wanda that Barbie dreams about is one that was never trans. She as seen as cisgender in Barbie’s eyes. 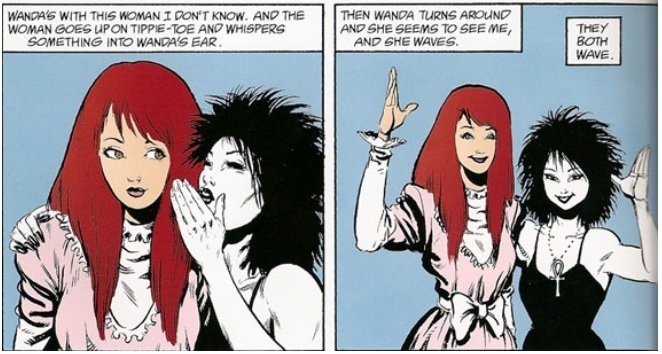 Neil Gaiman has managed to accurately depict the nightmares that many trans women experience. Trans women are often told that they aren’t “real women,” and they are forced to defend themselves like Wanda did. Already facing high rates of violence and murder, trans women must also face the fear of family members de-transitioning their bodies after death, a tragedy which happens quite often behind closed doors. Although Wanda has been celebrated for her compassion and loyalty, it is Barbie who wins the ally cookie by using her privilege to ensure that Wanda remains Wanda. The character of Wanda is merely used as a plot device. Even her death is used as a way to highlight Barbie’s experience as an ally. Wanda is remembered as merely another trope.

Click on through to the next page, where we go into detail about Gail Simone’s run on Batgirl.

Tash Wolfe is a femme zinester who writes about grunge kids growing up queer in the 1990s. Her writing on trauma is featured in university courses on sexuality and social justice in literature. She spends her time re-reading Sailor Moon manga and knitting lace scarves for friends. You can find her on Twitter and Ravelry @jewellerytears.