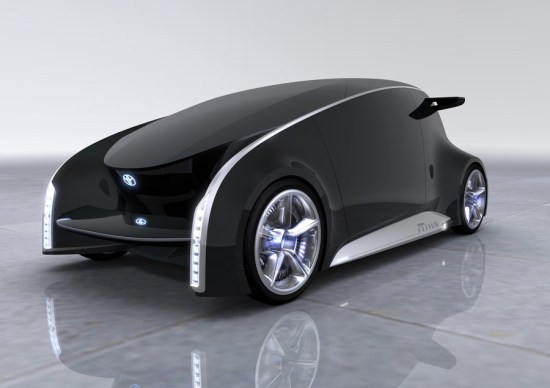 Debuting yesterday at the 42nd Tokyo Motor Show, the Toyota Fun-Vii is a bold vision of the future. A future where the entire exterior and interior of your car is a video display, for some reason. Also, it looks like the Batmobile mated with a Prius. I’m dreading the future already.

Toyota envisions the Fun-Vii as an entirely interactive vehicle. The exterior would be one giant video screen, as well as the interior. From Toyota’s press release:

The ultimate in personalization functions offer the ability to alter the content displayed on the interior and exterior of the Fun-Vii with the same ease as downloading an application. For instance, the whole vehicle body can be used as a display space, with the body color and display content changeable at will. This allows the entire vehicle to function as a terminal for displaying messages or other information.

The whole of the vehicle interior also can function as a display space, with the interior freely adjustable to match the mood of the moment. Content such as navigation information is blended seamlessly into the interior through the use of augmented reality.

In their video presentation of the car, Toyota shows off displaying maps and augmented-reality style navigation — complete with attractive CG women — inside the car, and similar information outside the car. The vehicle would also feature totally seamless integration to user’s smartphones, allowing them to place pictures on the vehicle, and interact with it in other novel ways.

If you can wrap your mind around that, using the interior space for navigation makes sense but Toyota also sees it as an opportunity for customization. For instance, who wants to just sit in a car when you can sit in a car that’s running a video of clouds around you? The company also prognosticates a world where the car shares information with other cars, displaying the information both within and without the vehicle.

Alright, so this car is completely crazy, but keep in mind that this is a concept vehicle, and a bizarre one at that. It’s not really intended to be on the road, just to show off some concepts at their logical extreme, and also grab some headlines in the process. From a practical standpoint, this car doesn’t make sense. An all-glass exterior is inherently unsafe, and prone to breakage. Hate getting a chip in your paint from some jerk in a parking lot? Imagine having to deal with dead pixels on your car.

That said, we’ll probably see small implementations of what’s being demonstrated here — maybe a HUD or interactive panels somewhere on the car. Another technology that seems likely to actually come into use is the always-on Internet and the integration with mobile devices. This has already been done on several vehicles, which offer BlueTooth calling and music play back from phones. Baking in this integration on a deeper layer could be on the horizon, though it will certainly be complicated given the diverse and changing landscape of mobile devices.

That said, this is still a pretty wonky concept vehicle. Here’s how I imagine the brainstorming session going:

A: We need something bold and dynamic, but relevant to today. What do today’s people love?

B: The McRib? Smartphones?

A: That’s it! We’ll show ’em a car that’s also a smartphone!

So here’s a video of the car in action. And before you ask, no, it’s probably not all touch screen. It’s more than likely that the video on the car is just carefully timed to the actions of the presenter.

(Toyota via Geeks Are Sexy)