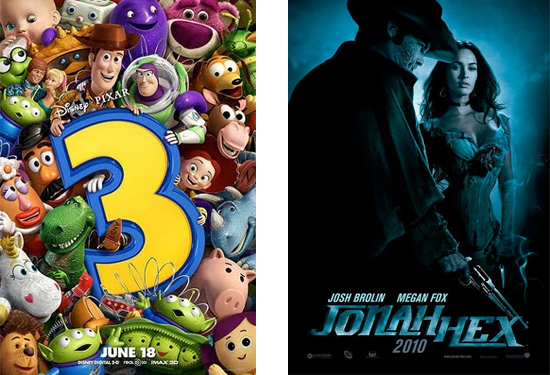 Depending on whether or not you’re a calendar purist, this coming weekend is either the first weekend of summer movies or merely the weekend right before the summer truly begins; either way, there are two big releases coming up in the forms of Toy Story 3 and Jonah Hex.

The two aren’t exactly in direct competition — most young children wouldn’t be able to handle the sight of Jonah Hex/Josh Brolin’s facial scar, much less Megan Fox’s acting — but the gulf between the two movies in terms of the reviews they’re getting is shaping up to be an event unto itself: In short, Toy Story 3 has been getting great reviews, and Jonah Hex has been getting reviews so awful, we wonder if it’s the next horrible cult movie in the making.Currently, Toy Story 3 has a 100% “fresh” rating on Rotten Tomatoes, and a “very favorable” 87% rating on Metacritic, making it the best-rated film currently in wide release; meanwhile, Jonah Hex has a Ballistic: Ecks vs. Sever-like 00% “fresh” Rotten Tomatoes rating and an awful 27% rating on Metacritic.

With that in mind, guess which movie the following review snippet applies to: Answers at the end.

Its incoherence, its clear contempt for physics, logic, human behavior, story structure, or even naked spectacle are partly the result of someone … who shouldn’t be allowed to direct traffic on a one-way street, crippled even further by the maddeningly dada edits provided by a few studio butchers people should hide the silverware from.

The 81 minutes (including credits) of … footage that made it to the screen look like something assembled under a tight deadline, and possibly under the influence. One flashback makes three appearances. A fight scene with no dreamlike elements, apart from a sky tinted red in post-production, repeatedly appears as a dream sequence. A chunk of [either Jonah Hex’s or Woody’s] origin is told by way of animation for no apparent reason. Narration comes and goes. Whole elements, like [Jonah Hex’s or Woody’s] supernatural powers and [Megan Fox’s or Bo Peep’s] prostitute-in-distress, could disappear without anyone noticing. And that’s without even mentioning the Native American village that shows up at random.

It’s easily the best film of the summer so far … if not the entire year.

[Jonah Hex or Toy Story 3] is a salute to the magic of making believe.

In what is possibly a confused stab at allegory, [Jonah Hex or Woody] finds himself trying to prevent [John Malkovich or Emperor Zurg] from blowing up the Capitol Building with a Super Weapon. In scenes set in the Oval Office, the U.S. President is concerned by this threat by [John Malkovich or Emperor Zurg], who is an embittered Confederate general, and decides that the wanted outlaw [Jonah Hex or Woody] is the only man who can prevent the plot from being carried out.