Tom Hanks Reveals Disney’s Spoiler Rules For Toy Story 4, Because He’s Tom Hanks So He Can Do That

What are you going to do about it? He's Tom Hanks. 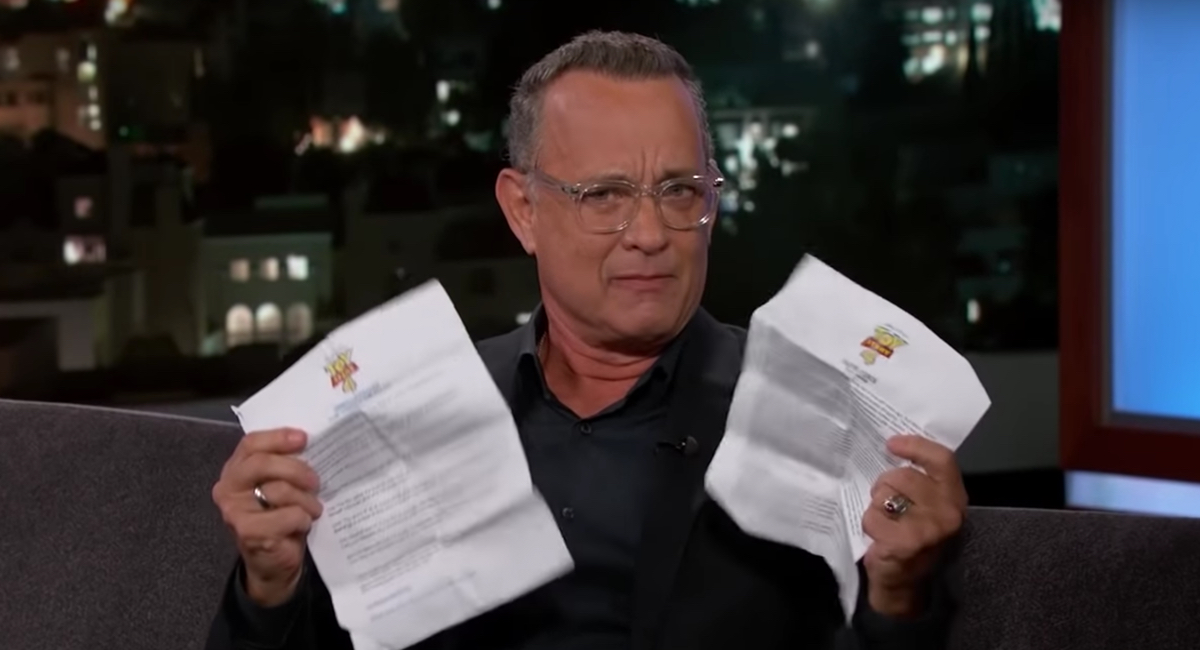 Move over Tom Holland. Disney has a new troll.

On Jimmy Kimmel Live, Tom Hanks revealed all the things that Disney has told him he can and cannot say on the press tour for Toy Story 4. He even jokes at his own expense, “Do you know how many executives right now want to kick my ass because I brought this out?”  Check out the full interview with Hanks below.

It’s an open secret that Disney makes it clear what actors can and can’t talk about on the press trail. It is new, however, for an actor to reveal the press talking points in an interview. This is Tom Hanks, of course, so his career isn’t going to be in trouble because he tangled with the Mouse.

Instead, it comes off as a great bit. “I have these talking points that Disney gives you at the beginning of the press junket thing and these things are like Gutenberg Bible stuff,” Hanks said. “Look at how many times I’ve studied them … I’ve spilled some tomato juice on it at one point.”

Obviously, Hanks censored out the spoilers from the press notes that he wasn’t allowed to give out, but he did offer an example question and answer given to him by the press packet. One sample question was about the character of Bo Peep and her strength in the film. Hanks recited a response from the notes, saying “Bo Peep should be described as a strong character from the beginning. Her recent experience, perhaps made her strong, but she was never a weak character.”

It’s great to see Disney getting mocked for their spoiler-phobic policies. When directors won’t even tell their stars what kinds of scenes they’re filming (see, the wedding vs. funeral secrecy in Avengers: Endgame), we might’ve gone a little too far with spoiler culture. Hanks poking fun at the intense rules Disney has set up is harmless, but it’s nice to see someone calling out the Mouse’s spoiler secrecy.

Hanks also had high praise for the film itself, saying “I know it sounds ridiculous, because I’m in it, but it’s one of the best movies I’ve ever seen in my life.” We loved the film too, and Hanks seems genuine in his effusive praise. The film comes out next Friday, June 21, and we can’t wait for the rest of the world to see the film and love it too.