JR Tolkien's Beowfulf Will Be Published | The Mary Sue

After 90 Years, JRR Tolkien’s Translation of Beowulf Will Finally Get Published 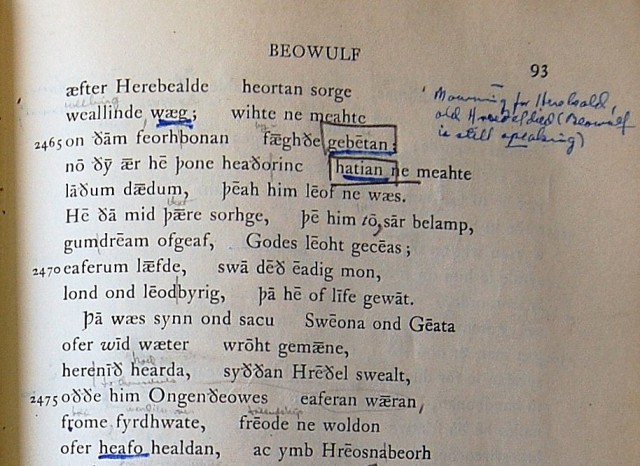 Before he was a fantasy author, JRR Tolkien was an incredibly gifted linguist (how else do you think he kept track of so many different Elvish dialects?) with a focus on early Old English and Norse. Now, we’ll get to see more of his translation work first hand, because his version of the 10th century epic poem Beowulf will soon be available.

First completed in 1926, Tolkien’s translation’s been stuck on the shelf for almost a century, unlike most of his posthumously published Middle Earth writings. We’ve known of its existence for most of that time, however, and while it might not necessarily become the definitive version of the text, previously published Tolkien translations have been met with high praise, such as his version of Sir Gawain and the Green Knight.

“As a Prof of Old English, Beowulf would have always been in his mind and in his sights,” poet Simon Armitage, who first achieved success with his own translation of Sir Gawain, told the Guardian. “The fact that his Beowulf has slept dusty and unpublished for so long makes me wonder if he felt confident about publishing it at all. But given the current taste for his work and the film versions of his books, it will be interesting to see if it gives Heaney’s Beowulf a run for its money.”

He’s not wrong there—can you imagine how many Lord of the Rings and Hobbit fans are going to jump on this translation? Never mind that the original text strongly influenced the creation and mythology of Middle Earth in the first place; Beowulf itself is about a big awesome dude fighting a bunch of scary monsters for glory. Who doesn’t want to read that? You know, except for the people who can’t get past the dense language of the prose itself, but I’m sure most Tolkienites won’t have a problem with that at all. If you can tackle The Silmarillion and live to tell about it, you can definitely handle the Spear-Danes in days gone by.

“It is as if he entered into the imagined past,” said Christopher Tolkien, whose been steadfastly curating and publishing Tolkien’s uncovered works since the author’s death in 1973, “Standing beside Beowulf and his men shaking out their mail-shirts as they beached their ship on the coast of Denmark, listening to the rising anger of Beowulf at the taunting of Unferth, or looking up in amazement at Grendel’s terrible hand set under the roof of Heorot.” Yes. Sign me up for that, please. I want to go to there.

Of course, HarperCollins would not answer questions about how Tolkien chose to translate the now contentious opening word of “Hwæt.” The line made headlines recently after scholars argued that every translation on the market today had gotten it wrong. Guess we’ll have to wait until this new version is released on May 22 to see if Tolkien fell into the same trap as everyone else.

(via The Guardian, image via The Crossett Library)