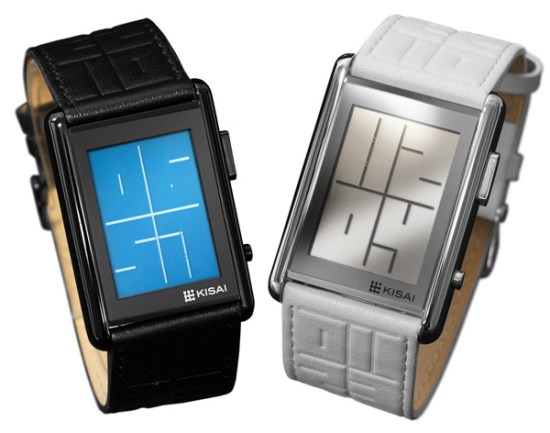 As part of its enduring fondness for watches which aren’t immediately decipherable, Tokyoflash has released yet another watch that isn’t exactly what it seems. The Kisai Stencil Watch, while a little weird at a glance, is probably the most intuitive Tokyoflash watch I’ve seen in a long time. The trick is easy; the numbers are drawn with the whitespace. As you might have guessed by the watch’s name, its face is conveyed via stencil, making it look like jumbled lines at first glance, but also exceeding easy to read once the trick clicks.

As neat as that is, there seems to be one weird issue with the presentation. While the numbers 2-9 can be pretty easily conveyed by sectioning off whitespace in a rectangle, the number 1 is tougher and winds up just being a division down the center. I guess it’s up to you to decide which half is the extra space and which is the number. Of course, 4, 7, 9 have their whitespace issues as well, but those are a little less jarring.

The Kisai Stencil Watch comes standard with a stainless steel body and a leather strap. You also get a choice of backlighting; you can opt for a version that illuminates the space (i.e. the actual number) or one that lights up the divisions. If you’re looking to pick one up, they’re available for the $99 USD right now, but that price hops up to $139 at 11PM EST, so if you’re going to impulse buy, get to it.  I think I’m going to hold out for the inevitable Tokyoflash watch that shows time literally in hieroglyphics.