And Now, the Latest in Terrible Sexism From the Trump Administration 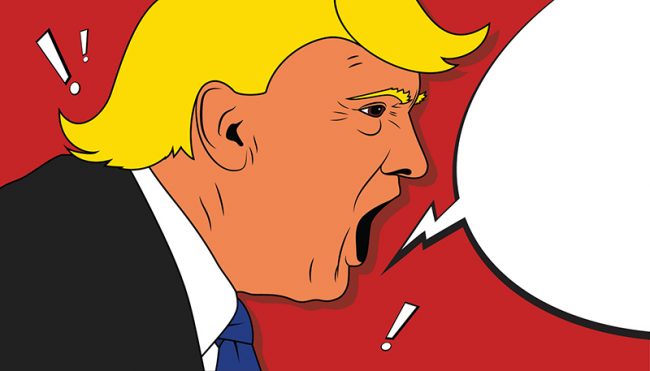 Republican lawmakers in the House may appear busy doling out their thoughts and prayers re: Sunday night’s tragedy in Las Vegas that killed 59 people, regarding the mass shooting like a natural disaster that common sense gun control could not have prevented. But while they’ve been doing that, they’ve simultaneously been preparing to vote on a piece of legislation heartless even for a bunch that’s spent the past year trying to take away healthcare from millions: H.R. 36, the Pain-Capable Unborn Child Protection Act to ban 20-week abortions on a federal level.

The bill would drag America back to its tragic history of punishing women and doctors for having or providing abortion services, making both illegal at and past 20 weeks gestation. Despite how Roe v. Wade protects abortion rights until fetal viability, doctors in violation could face up to five years in prison

And on Tuesday (yes, it really is only Tuesday), the same day the House is slated to vote on the bill, the self-identified “pro-life” White House opted to weigh in on the bill.

“The bill, if enacted into law, would help to facilitate the culture of life to which our Nation aspires,” President Trump’s Office of Management and Budget said in a statement. And in what reads as an awkward attempt at irony, the statement praised the bill on its commitment to “a science-based approach to unborn life,” claiming that “recent advancements have revealed that the physical structures necessary to experience pain are developed within 20 weeks of fertilization.”

The statement concluded, “The United States is currently out of the mainstream in the family of nations, in which only 7 out of 198 nations allow elective abortions after 20 weeks of pregnancy. America’s children deserve the stronger protections that H.R. 36 would advance.”

Funny that the statement from Trump’s White House should bring what “America’s children deserve” into the fold considering how just last week, Congress threw 9 million American children under the bus by allowing the Children’s Health Insurance Program to expire, but that’s really only the tip of the iceberg in terms of all that’s awful and fucked up about the bill.

Just off the bat, H.R. 36 is needlessly cruel because roughly 1 percent of all abortions in the United States are performed after 20 weeks, according to Guttmacher Institute. To be perfectly frank, I hate using this argument much in the same way that I hate using the arguments that Planned Parenthood doesn’t use federal funding for abortion, or only 3 percent of its services are abortion services, because there’s nothing wrong with abortion and in an ideal world we wouldn’t have to be so defensive. That’s how I feel about late-term abortions—in an ideal world, women wouldn’t have to jump through hoops to justify their bodily decisions, but since we clearly aren’t living in an ideal world, here are the facts. The vast majority of late-term abortions, which are already relatively rare occurrences, often take place to protect the health and safety of the mother or due to fetal abnormalities and high chances of miscarriage, which are obviously devastating to the fetus’s parents.

If you’re taking away a service that women sometimes rely on to save their lives, here’s something you should try asking yourself—are you really pro-life? In the United States, the wealthiest country in the world, we also have the highest maternal mortality rate in the industrialized world. We have thousands of poor women scrambling for basic health care due to a recent influx of Republican-backed restrictions on insurance coverage for abortions, and now, bills like this which would further jeopardize women’s health and, frankly, their lives.

As for that “science” the White House felt the need to praise, you’ll note that the statement failed to cite any actual study, because outside of right-wing pseudoscience, there is none. Don’t take my word for it; do some Google searches and see what you find. (Spoiler alert: You will literally find nothing). The bill relies on this scientifically unfounded premise of fetal pain the way all its previous incarnations have, because this is what works—painting embryos and unborn fetuses as persecuted human beings distracts from who the real persecuted human beings are (I’m talking about women, FYI) and enables Republicans to legislate away women’s human rights.

As I noted in last week’s The Week in Reproductive Justice, we’ve seen this bill before. It previously passed the House in 2015 but was shut down by the (slightly) more rational Senate, and experts predict it will meet the same fate this time around. Nonetheless, the backing of the White House gives it a bit more power, and that’s terrifying considering its scope. This bill is rare in that abortion isn’t typically an issue taken up by Congress, which usually goes only so far as to try and defund Planned Parenthood. If successful, it would set a dangerous precedent.

In the wake of the Las Vegas shooting, a time when the White House would ideally be calling on Congress to take all necessary actions to stop this from happening again, it’s instead focusing on attacking women’s human rights. The simple reality is that if this bill is passed and implemented, women could die—but whether Republican lawmakers care about this is iffy considering their response to a mass shooting that killed 59 human beings.

At the present, 17 states have restrictions on 20 week abortions, but the White House’s beloved H.R. 36 would make this reckless, dangerous and, frankly, heartless bill the law of the land.