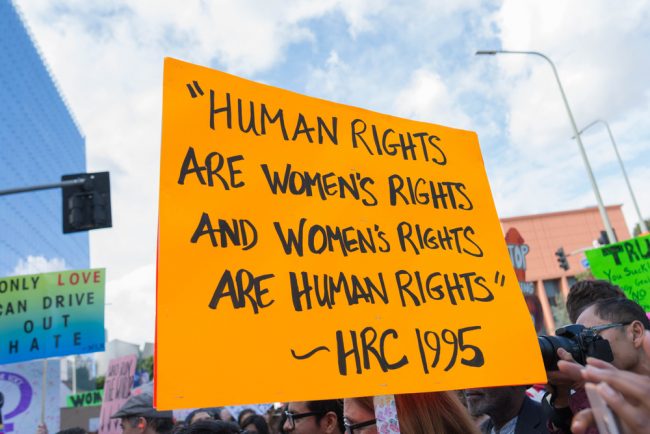 Thankfully, this week saw the death of the Graham-Cassidy Obamacare repeal bill, a ruthless piece of legislation that would have gutted Medicaid, defunded Planned Parenthood and slashed maternal health care — all on top of likely costing thousands of people access to health care.

And of course, while all of that was happening on a federal level, in states across the country and even in Ireland, big things were happening for reproductive rights. Here’s what you may have missed:

The Republican-controlled House will vote on 20-week abortion ban

Cases in which federal lawmakers deal with abortion rights are exceptionally rare, but it’s no surprise that a Republican-controlled House that’s funneled millions into an objectively stupid investigation into Planned Parenthood’s conduct would take it upon itself to get involved. (Apparently, to “pro-life” Republicans, donating fetal tissue to help medical experts research and discover life-saving cures is the same thing as “selling baby parts.”)

On Wednesday, House Majority Leader Kevin McCarthy announced the delightfully-named Pain-Capable Unborn Child Protection Act will go to the House floor for a vote next week on Tuesday, Oct. 3. The bill would ban abortions 20 weeks into pregnancy, despite how Roe v. Wade ruled abortion legal until the point of fetal viability, and the vast majority of late-term abortions are due to fetal abnormalities or the health and safety of the mother. Unsurprisingly, its premise — that 20-week-old fetuses can feel pain — is unfounded by any actual scientific fact, and rooted in the idea that unborn fetuses are more deserving of rights than pregnant women.

The Pain-Capable Unborn Child Protection Act previously passed the House in 2015 but was promptly shut down by the Senate, and will likely follow the same path over the next few weeks. But it’s worth noting that if by some miracle, the bill managed to pass House and Senate, it would become illegal to attempt or provide an abortion after 20 weeks, and those in violation of this could face up to five years in prison — effectively taking us back to an era of women and doctors being punished for abortions. At this time, about 17 states have bans or heavy restrictions on abortions at 20 weeks gestation according to Refinery29, and the bill would make this the law of the land.

After a good amount of ambiguity over whether he would or wouldn’t, Republican Gov. Bruce Rauner, who has previously signed legislation requiring anti-choice doctors to refer people seeking abortions to providers, on Thursday signed a bill to protect abortion rights. The bill would both expand state-funded coverage of abortions for low-income residents on Medicaid and state employees, and ensure legal abortion access in the state of Illinois if a Trump Supreme Court were ever to overrule Wade. It’s likely Rauner’s decision will earn him backlash from his fellow Republicans, but it’s actions like this that put women’s health and human rights before party politics that we need right now.

“As I have always said, I believe a woman should have the right to make that choice herself and I do not believe that choice should be determined by income,” Rauner said in a statement about his decision. “I do not think it’s fair to deny poor women the choice that wealthy women have.”

According to a report by the Washington Examiner, in the wake of the failure of a health care bill that would have defund Planned Parenthood, anti-abortion groups are in talks with Senate Republicans about using the upcoming tax reform legislation as yet another vehicle to slash women’s health funding.

But in turn, Planned Parenthood has been reaching out to lawmakers with an important reminder, according to the Examiner report:

“Planned Parenthood representatives warned in a phone call with reporters Wednesday that including the provision to cut off federal funding from their organization would stand in the way of the successful package of a tax bill. At least two Republicans and 48 Democrats oppose cutting of family planning funding from Planned Parenthood, they said.”

It’s an important reminder that however chaotic things might get on Capitol Hill, legislative moves that dictate what women can and can’t do with their bodies are acts of extremism and, as Planned Parenthood notes, for that reason, they’re an unviable form of policymaking.

The same week that a new report found nearly half of all global abortions are unsafe, Ireland’s first openly gay national leader, Taoiseach Leo Varadkar, announced the country would vote on its current constitutional abortion ban in May or June of next year. Ireland is currently one of the last European countries where abortion is still illegal even in cases of rape, incest, and fetal abnormality. Ireland’s current constitution says the right to life of an unborn child and the mother are equal — a view closely in line with most American Republicans, who similarly prioritize fertilized eggs over human women, and born, sick children who need health care.

According to the Washington Post, currently, thousands of Irish women travel to Britain to have the procedure, and a plurality of Irish citizens oppose the ban and support reform.

Regions without access to safe, legal abortions have higher maternal mortality rates. And even in the United States, where abortion is technically legal but almost 90 percent of counties have no abortion providers and thousands of legal restrictions and economic barriers have rendered it virtually inaccessible for many, maternal mortality rates have soared and continue to steadily grow.

If history and all available data from recent years have shown us anything, it’s that barriers on abortion access do virtually nothing to reduce the rate at which they happen, but dramatically affect women’s health, safety and economic standings.