TMS Geeks Out: We Break Down the Latest Rogue One Trailer

This morning saw the release of the brand new Rogue One: A Star Wars Story trailer. It’s likely to be the last one we get (aside from television spots), seeing as how we’re basically two months away from the film’s release. While that amount of time does feel weird to say and think about (two months are you kidding where does the time go), that should be plenty of time for us to speculate on and dissect every trailer, spot, interview, and featurette within reach of our grubby little paws. I don’t know about you, but this is what excites me the most about being a fan: the wild, fun fan theorycrafting!

[Editor’s note: You can watch us discuss the trailer together on video or skip straight to the full breakdown below.]

Because this is the final trailer, it seems like the filmmakers did their best to hold nothing back, packing it full of what looks like new footage. It begins with one of the characters we don’t know a whole lot about: Jyn Erso’s father, Galen Erso. An Imperial transport ship lands on wherever it seems to be that Galen lives (or is perhaps hiding out). As the Imperial troops, accompanied by Director Krennic, march imposingly towards his home, we cut to a shot of Galen telling Jyn, “Whatever I do, I do it to protect you,” to which she replies, “I understand.”

This is an interesting exchange between the two of them, and perhaps provides a little insight into Galen’s motivations. With what we can piece together from various interviews, spots, and trailers, we know that Director Krennic essentially coerces Galen into helping build the Death Star. The prequel novel tells a story about how Krennic saves Galen’s family, thus placing him in the director’s debt. It seems that Krennic is calling for this debt to be repaid, and forces Galen to assist with the development of the Death Star.

Of course he doesn’t want his technology, originally developed to help people, to be used in a superweapon. But my guess is that after threatening him and perhaps threatening Jyn as well, he eventually relents, joining the Empire to help them develop the space station.

The trailer cuts to the movie’s current setting, with Jyn in what looks to be an Imperial prison. This prison’s on a desert planet, likely the same one we’ve seen in all the preceding trailers. The Imperial presence is heavy, which makes the following scene even more meaningful. In the middle of what looks like a prisoner transfer with Jyn and some other people, Rebel troops break in to spring her free. Knowing how heavy the Imperial presence is, it goes to show how important the Rebellion feels Jyn will be to their cause. Such a risk in the Rebellion’s early years must have been considered to be monumental, but necessary, I imagine.

The next shot of the cruiser, ostensibly transporting Jyn elsewhere, packs a blink-and-you’ll-miss-it moment. They’re flying over what at first glance appears to be a mountain range or random geographical features. If you’re particularly eagle-eyed (or if you pause, I guess), you’ll notice that it’s actually a fallen, broken statue of a Jedi. Heck, if you kind of squint your eyes a little bit, it kind of looks like Ewan McGregor as Obi-Wan, thanks to what looks like a bushy beard on this Jedi’s face.

Not long after, we’re back on Yavin IV, and Jyn is being questioned by Captain Andor and Mon Mothma in a scene from the first trailer that’s long been made to be iconic. Here, we discover that they freed Jyn because of her link to her father, in addition to the litany of possible skills she can bring to the Rebellion. The very next scene is of Galen in Imperial uniform (still sporting a beard, like the rebellious person he is, I suppose), standing opposite Krennic once again. The scene bears a resemblance to a scene in Return of the Jedi where an officer aboard the Death Star II goes to greet Darth Vader shortly after he lands in the station’s landing bay. It’s a passing similarity, but one that I think should be noted. 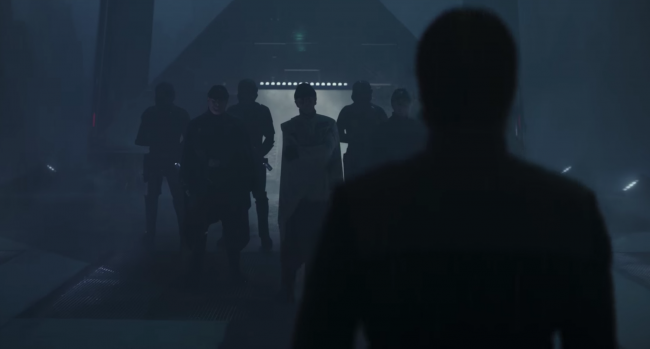 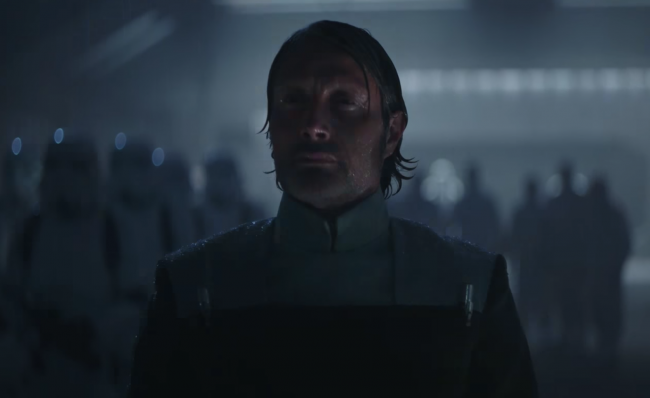 After, we’re introduced to the crew of Rogue One, the seemingly eccentric misfits that make up the almost Magnificent Seven-esque band at the center of this adventure. From here, we’re treated to the moment where the callsign “Rogue One” was born. As they’re taking off, Bodhi Rook seems to pull the name out of thin air. You know, as you do with legendary callsigns and all.

Krennic seems to be lecturing Vader about the Death Star in the very next shot. From what we know about how Vader felt about the Death Star (“Don’t be too proud of this technological terror you’ve constructed. The ability to destroy a planet is insignificant next to the power of the Force.”) it’s likely he’s… voicing his concerns about the usefulness of the station. Frankly, the thought of anybody addressing Vader like how Krennic is here intrigues the hell out of me and makes me wonder what, if anything, their history together could possibly be.

Then there’s the prerequisite “let’s all gather around the holotable and plan our strategy” shot where everybody is discussing what’s to be done about the Death Star. Some notable people present at the table: Mon Mothma, Captain Andor, Jyn, and General Jan Dodonna, who coordinated the Rebel forces at the Battle of Yavin IV and the destruction of the first Death Star. He’s the white-haired gentleman standing to the right of the table.

One of the leaders at the table is, again as usual, talking about how much firepower the station has, wondering what chance they have as a scrappy, (relatively) tiny Rebellion. Jyn replies with a line that certainly gave me chills, though might be seen as something of a naive quote: “We have hope. Rebellions are built on hope.”

As she’s saying this, we’re shown a shot of Saw Gerrera walking along in wherever he seems to be hiding out. The music begins to build, and some of the more action-oriented scenes are shown, with rebel troops running through jungles, the Imperial base which is located on that white sandy beach seen in the other trailers, plus Jyn, Captain Andor, and K-2SO all in disguise, entering what looks to be that same base.

Following that, there’s another blink-and-you’ll-miss-it connection with Chirrut Îmwe and Baze Malbus on a mountain as X-Wings fly by on a dark, rainy planet. This looks to be the very same planet where we saw Galen greeting Krennic. Could this be where the construction of part of the Death Star be taking place? Is this where the “rescue Jyn’s father” portion of the movie happens? I think it’s likely, as the settings are remarkably similar, at least.

After that, Chirrut ends up dispatching some stormtroopers back on a desert planet, and just as he’s about to get run down by seven or eight other stormtroopers, they’re all skillfully nailed by Baze in just as many shots. Next thing you know, we’ve entered the “hey let’s cram hella cuts in at the end” portion of the trailer, and we’re shown how the battle on the stormy mountain planet is going (lots of orange explosions contrasting with the otherwise dark blue background), the beach assault with Bodhi looking like he might soon be overrun with Imperial troops (oh nooo), and various other shots of battle.

“We’ll take the next chance,” Jyn says as the music and the footage reach a fever pitch. “And the next.” Then, we hold on a massive explosion on a desert planet, most likely the same one as the one from the beginning of the trailer with the fallen Jedi statue. A figure who looks like Bodhi (goggles on head, possibly long black hair), stands before a huge explosion that looks like something’s crashing and headed their way. My guess is it’s a Star Destroyer (triangular shape, some interesting glowing coming out of the dust clouds) crashing planetside.

“Save the Rebellion…” shouts Saw. Darth Vader’s walking through smoke (as he does) towards Krennic, all menacingly. Then, another super quick shot of Galen, who looks to be on his knees after someone struck him or something, looking up in the rain at somebody who’s looking down over him. Most obvious guess is that it’s Krennic who hit him, but there’s no way to confirm or tell just from this. “… save the dream,” Saw finishes.

After a final few shots of the jungle beach battle with the AT-ATs and troops running underfoot, it cuts to black and the haunting Rogue One version of “Binary Sunset” plays out the last trailer of the movie.

Listen, I know that’s a lot, but to be honest, that’s just how much is packed into this two-and-a-half minute trailer.

Overall, I think that this trailer has gotten me hyped for this movie like nothing else. I’m intrigued by the introduction and further clarification of Galen’s role in all of this, and I’m finding myself super invested in the myriad settings where this movie seems to be taking place. The diversity of landscapes alone have made for an amazingly gorgeous backdrop.

As well, the cinematography is absolutely striking, with some extraordinarily artistically-composed shots that, as our own video expert Alec put it, “look like concept art brought to life.”

If nothing else at all (as unlikely as that will be), this movie will be an absolute treat to look at and observe. I don’t know about you, but I am excited beyond all measure for this movie, and I think that there will just be so much to enjoy.