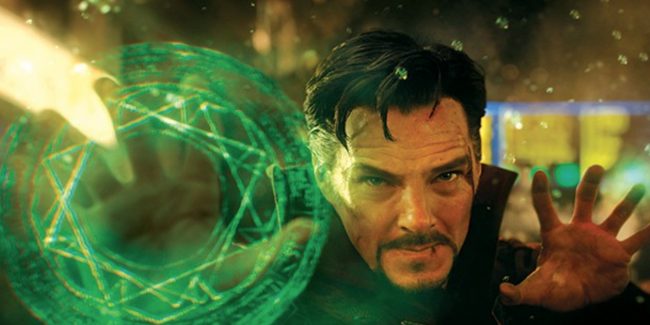 Here’s the thing about Doctor Strange: it’s an incredibly fun ride. Much in the same way a lot of people don’t really care about the tiny details and story behind the Indiana Jones and the Forbidden Eye ride in Disneyland or the story within the Harry Potter and the Forbidden Journey ride at Universal, the overall experience of Doctor Strange is wonderfully fun… provided you don’t try to dig a little deeper.

The Spoiler-Free Short of It, or TL;DR
While I would understand not wanting to see this movie out of a desire to not fund people who don’t understand the significance of representation, I think that if you’re remotely interested, it’s worth a watch. It is, as I said, a fun ride, one that you’ll have fun deconstructing, even if you know at the end you’ll end up with a pile of problems and maybe even a headache. It is a spectacle in every sense of the word, and if you’re the type to not miss out on spectacles (especially Marvel ones), then you’re probably going to want to see it in theaters–in 3D, no less.

Just, you know, don’t go in expecting The Winter Soldier or anything like that.

Beyond here lies spoilers. Abandon hope, all ye who enter here in hopes of avoiding spoilers. Seriously, though: spoilers.

The Good
There are things that Doctor Strange excels at. Visually speaking, it’s one of the most gorgeously mind-bending films I’ve seen since Inception, and this movie certainly carries its own nods to that stunning film. All of the sequences depicting fights in and around the metaphysical realm are wonderful, and I’ll even say that they made the upcharge for the 3D glasses worth it. One of the friends with whom I saw this movie said it was like she was watching the film through a kaleidoscope, and really, I couldn’t think of a more apt description.

Watching Doctor Strange (Benedict Cumberbatch), Mordo (Chiwetel Ejiofor), the Ancient One (Tilda Swinton), Kaecilius (Mads Mikkelsen) and his wards running through a twisty, kaleidoscopic New York was a treat. One couldn’t help but be absorbed completely based on the visuals alone, and that’s a feat few movies accomplish.

What’s especially great about the visuals presented here is that they provide more than just a nice backdrop for these scenes. They provide a much-needed visual context for everything else that’s going on. Everything becomes surreal, placing the characters, the audience, and the entire movie into a realm beyond our own. It succeeds at that oh-so-elusive aspect of moviemaking: total immersion.

The Bad
But that immersion is broken if one tries to look beyond what is only skin-deep.

One of the biggest problems with its story is its strange romantic subplot. We’re introduced very early on to Rachel McAdams’ Doctor Christine Palmer, who, as we’re told, is a former lover of Strange’s. After Strange loses much of the use of his hands, he lashes out at everyone around him, including Christine. Then, he leaves on his Into the Wild journey/search for a cure, and she’s quietly shoved into the background.

The movie tries to make us feel sympathetic, in some way, to Strange’s regret at lashing out. It tries to get us to understand and empathize with the difficulty that comes with apologizing for being a pure asshole. It fails in this regard, despite Cumberbatch and McAdams’ best attempts. There simply wasn’t enough time given to have us really care about anyone that wasn’t in a strange, mystical wardrobe, and that’s unfortunate.

As well, the solution to the movie’s Big Bad Problem feels… insignificant, perhaps. Doctor Strange uses the Eye of Agamotto to trap himself and Dormammu in a moment of time that repeats itself over and over and over again. He essentially outsmarts a being that clearly outpowers him, and he does so by trivializing and accepting his own death over and over and over again. While I found much symbolism within this scene (which I explain in a forthcoming post), it felt like with all the buildup of the previous majority of the movie, I wanted something maybe just a little more out of this scene.

Strange’s death is played off for comedic effect a few times, which removes a little bit of the emotional impact, diminishing what is supposed to be a significant conclusion to his character arc. The lessons and themes presented earlier in the film by Swinton’s Ancient One revolve around letting go of ego, understanding that it’s not all about you, and ultimately, death, are all resolved well here, with the exception of death. Each time Strange dies in this climax, it’s brutal, it’s a shot to the chest.

But the nonchalant way in which he accepts each death, and the almost tired look on his face every time he returns betrays the arc. It’s supposed to be a comedic reflection of him thinking, “Oh, okay, here we go again I guess,” but it comes off as a flat tiredness.

Because of this, it feels like the movie ends on a strange, inconclusive note, one that leaves mixed feelings floating around in my stomach somewhere.

The Ugly
Of course, I can’t write about Doctor Strange without mentioning the fact that I do not understand what the point was behind whitewashing the Ancient One. I go into much greater detail about my feelings in another post, but suffice it to say here that while I absolutely adore Swinton and everything she brings to any role she inhabits, I do not see what she brought that other Asian actresses could not have brought themselves.

There was little to no impact to having the Ancient One be Celtic, especially against the backdrop of Nepal. Yes, there was significance in her being a woman, and it’s played out on-screen in a perhaps expected scene of mistaken identity. But I still do not understand director Scott Derrickson’s justification behind why he had to whitewash the role.

Given that, the movie left something of a bad taste in my mouth, one that’ll have me wondering about what’s to come for quite some time.