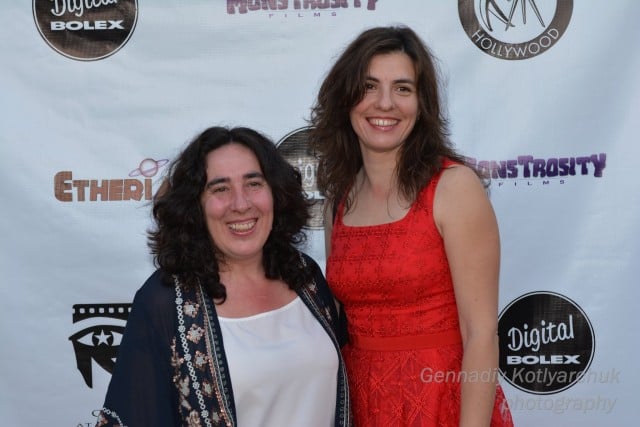 One of the best things about film festivals like Etheria Film Night in Los Angeles is that it exposes you to female-helmed films from all over the world. It’s great to see different countries represented, and we were particularly excited about Arantxa Echevarría’s horror short, “Suddenly One Night (De Noche y De Pronto),” an entry into the festival from Spain. I speak Spanish, and so I got the chance to flex my language muscles when I conducted my interview with Echevarría for The Mary Sue just before her screening. But don’t worry, I’ve translated it into English for you so you don’t have to sneak usage of Google Translate at work. You’re welcome.

Teresa Jusino (TMS): What made you decide to become a director? Because directing seems insanely hard! Sometimes I wonder why anyone decides to go into directing!

Arantxa Echevarría: More than wanting to, I needed to. I’ve needed to do it since I was about eight years old. When I was a little girl I used to play filmmaker. And I didn’t have any connections to film through my family or anything like that, but I was a huge film fan and I loved to watch movies. And I grew up watching all the classic films, lots of American films, and I always wanted to go into the film industry. So, I studied, and I was lucky in that I started to get to know people that were making short films; people with whom I connected intellectually and creatively, and it was through them that I started working in film. And when I started out, I wanted to make a living in film, which is even harder than directing! And in Spain, it was especially tricky, because we were in an economic crisis. So, I started working my way up in film production on the technical side of film – as a PA, etc – and directing got pushed further and further onto the back burner, because…everyone wants to be a director. No one wants to be a PA, no one wants to be the one who has to sweep the set, you know? So I worked, and I let directing go, and I eventually became a Production Manager and started working on other people’s projects and short films, and so many people told me the same thing: Why don’t you get motivated! If what you want to do is direct, you should do it! Because I’d start talking to whoever the director was on set like, You know, I think the camera angle would be better if you put it on the left. You should put this over here. [laughs] So, everyone told me I should be a director.

So, I got motivated, but I was also really shy about it, and I had a lot of trouble at first. Until finally a friend of mine – one of the bigger producers in Spain, actually! – told me that either I need to do it, or go away and never work in film again. You’re good. Do it. Be a director. So I did, and I love it. It’s a vocation for me. I’d do it for free. And a lot of the time I am working for no money, making short films and things like that for the love of it. But I do love it, because it’s a pleasure.

TMS: Did you go to film school, or is your knowledge mostly from experience on set?

Echevarría: I learned most of what I know on set. I did start taking some classes to learn how to do this, but when I got there and saw that they wouldn’t even let you near cameras, and that I would learn absolutely nothing, I stopped going.

TMS: So, it’s better to learn by doing and to gain on-set experience?

Echevarría: Absolutely. You get to see how to work on set, how everything fits together, as well as learning how the equipment works. But on-set experience teaches you so much, because there are a million ways to run a set, to make a film. It changes each time you get a different group of people to film. It’s a world apart.

TMS: Tell us the story of your short film, “Suddenly One Night (De Noche y De Pronto).” What inspired it?

Echevarría: Well, the story was actually inspired by the same producer who told me I needed to be a director. He told me the story of this time that he got back home to his apartment one night, and when he unlocked the door, the door was locked from the inside – he had one of those chains on it – so he opened the door, and the chain was locked. But he lives alone! No one had the keys to his place. How did someone get into the house? So he was petrified. He gently closed the door, because he had no idea who was in there, and he left to call the police. So that story of a home invasion was the seed of the story I ended up developing. So “Suddenly One Night” starts with the same premise – someone comes to your apartment and says Hey, someone is robbing my apartment, and they’ve got the door locked from the inside. Let me in so I can call the police. And you don’t know this person. What do you do? The answer might change if you’re a guy versus if you’re a woman. If you let them in, and they’re lying, you’re letting in a threat. Or, you end up being a Good Samaritan. So, that’s the basis of the film. I expect that it’ll frighten people.

Echevarría: Because I think that not enough women direct horror, and I think that we need to make all sorts of films in all kinds of genres. And whenever women direct small, socially aware films, intimate films, people say It’s a Women’s Film. Ugh. I hate female stereotypes. I’m very feminist, and I know all that we can offer. And if not enough of us are doing horror, I wanted to do horror.

TMS: What do you think women specifically can contribute the horror genre?

Echevarría: So much. A woman’s experience of fear is completely different from that of a man. The things that scare us tend to be psychological terror, fear of being alone, fear of violence, which we’re more likely to suffer. We’re much more afraid of those very real things than of things like demons. Hell, fear of getting old! I have a friend who, when she was younger, was really attractive, and it genuinely scared her to watch that deteriorate. Fear takes many different forms, and requires different perspectives, and the feminine is missing from all of that. We need to make more horror films.

TMS: What are the plans for “Suddenly One Night (De Noche y De Pronto)?” Is there any interest in making it a feature-length film?

Echevarría: I’d love to! But I don’t know if it can carry a feature length film. When you see it, you’ll have to tell me if you think it could be a feature! [laughs]

Well, I did see it, and I loved it. It was a fascinating look at the everyday things that women fear, and was completely unexpected. The film was about half an hour long, and I think that if it were a feature-length film, Echevarría could really take the time to ramp up the tension and make it just as frightening as she’d want it to be. Someone throw this woman some money so she can make this happen!