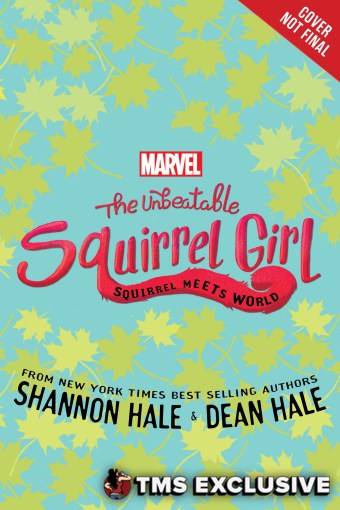 Obviously, we love seeing our favorite comic book heroes in…well…comic books. But there’s something to be said for adapting those characters into different mediums, exposing them to a wider audience. And believe it or not, mediums other than Tentpole Movies exist! In the case of Doreen Green, aka The Unbeatable Squirrel Girl, what better way to introduce her to girls who might not be reading comics than in a YA novel? Answer: there isn’t one.

Marvel Press, an imprint of Disney Publishing Worldwide, will be releasing Squirrel Girl’s first YA novel ever! It’s called The Unbeatable Squirrel Girl: Squirrel Meets World, and it’s set to arrive in February 2017. I reached out to the book’s authors, Shannon and Dean Hale. Here’s what they had to say about taking on Doreen Green in prose:

“We only did what any sane person would have done: when asked if we’d like to write a novel about Squirrel Girl, we said YES PLEASE” said Shannon and Dean Hale. “Her name is Doreen Green. She has powers of squirrel and powers of girl. And she is unbeatable. Writing this book has been the most fun we’ve ever had at work. It was also important to us. The common wisdom is that ‘boys won’t read books about girls.’ Which is, excuse the harsh word, HOGWASH. Although this toxic belief doesn’t have to be true, we often make it true by only giving boys books about boys and shaming them away from being interested in girls’ stories. So when we took on the Squirrel Girl project, we said, here is the perfect character to write an ‘all ages’ story. Everyone likes Squirrel Girl. (If you know someone who doesn’t, maybe advise them to go to a doctor and check if they have a heart?) Our goal was to write a book so funny and exciting and fun that it’d be welcoming to any reader, regardless of gender, age, or degree of comic geekiness. That wasn’t too high a goal, was it? Maybe writing a character with super-heroic confidence got to our head. But then again, maybe not…”

Marvel Press was kind enough to send us an exclusive first-look at the first few pages of Squirrel Meets World. Check it out!

Judging by what I’ve read so far, the Hales really have a handle on Doreen’s voice and sense of humor, not to mention the vibe Ryan North and Erica Henderson have established in the comic. I’m totally hype for this! The Unbeatable Squirrel Girl: Squirrel Meets World will be released in February 2017.