The Mary Sue Exclusive: “Let It Go” Lord of the Rings Parody and Interview With The Hillywood Show

Stay tuned for their next video, "Do you want to build an Uruk-Hai?" 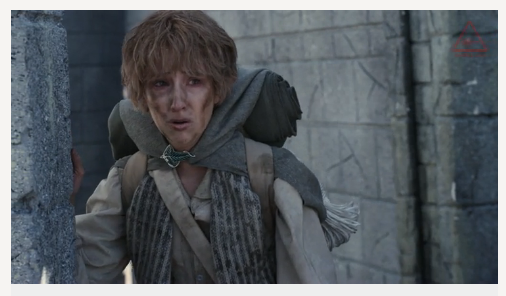 Since The Hillywood Show first hit Youtube with its premiere episode in 2006, it’s become a meticulously detailed fandom parody powerhouse that even recently caught the eye of Nerdist Industries. (You might remember them from their amazing Lil Jon/The Hobbit mashup, which is still one of my favorite Youtube parodies of all time.) Today we’ve got their latest video to share, as well as an exclusive interview with creators Hilly and Hannah Hindi about their creative process and their immense love for Lord of the Rings.

But before you scroll down to the interview, be sure to watch the video below! Trust me, if you’re a Samwise Gamgee fan, you need this in your life as soon as possible. Seriously, I don’t even feel angry that I have that Frozen song stuck in my head again for the hundredth time. It’s worth it.

Now that we’ve all wallowed in our Frodo/Sam feelings, lets talk with the two exceptional performers who made this parody possible.

Victoria McNally (TMS): Your videos have always been incredibly ambitious, but this one feels like a step above the rest–especially that Shelob scene. Can you talk a little about how you came up with this idea and what went into making it a reality?

Hilly: We’ve always wanted to do a parody on Lord of the Rings but we’ve never had the chance to because it’s so big of a production. I mean, Peter Jackson’s film is remarkable, it’s outstanding, and he’s our inspiration. So when it kind of came down to this year and everything coming to a close with Middle Earth, we felt kind of a tug in our heart that—Uggh, I think it’s about time we try to tackle this!

We go through the process of either thinking of a song or thinking of a movie, and I was just thinking of Return of the King—like, what would even work with that type of movie and what characters, and how are we even going to do this? It’s so big an ensemble of cast members, we can’t do it all—and I remembered the scene in Mount Doom, when Frodo is holding the ring over the fire and Sam’s like, “”Hey, drop it in! Drop it in the fire!” and I’m like, “Wait a minute—he doesn’t say ‘drop it in’, does he?” And my little mind started spinning a hundred miles an hour and I go, “Don’t you dare tell me he says ‘Let it go.’ ” And sure enough, I get the DVD, I pull it up, and he’s like “LET IT GO” and I just started screaming. I was like, are you kidding me? This is so obvious that we need to run with this idea. And that’s when I told Hannah the whole idea, how it was from Sam’s POV, how he’s the little unsung hero in this parody, and we wanted to show it through his eyes. I was like, we need to make this epic, we need to put emotion it and just run 100% into this thing.

TMS: This is your second parody since you guys became a part of the Nerdist Alliance. How has that been like, being part of such a big network? Has that changed your video-making process at all?

Hilly: Number one, we are so thankful to Nerdist, because The Hillywood Show has always been a little hard financially. Some months we would go off of fan donations, sometimes we would use some of the money we would make from our merchandise to go into the production. So it’s always been a really tough-and-go and a little frustrating, because we’re so ambitious and we just want to keep creating for our fans. So being with Nerdist helps so much, because now we have a solid person supporting us.

But the best thing about Nerdist is that they never once questioned our ideas or even try to be like, “hey send us the whole script” or “what scenes are you doing?” They just go, “What’s your idea?” The Lord of the Rings. “What song do you wanna use?” Uh, Let it Go? “Cool, we can’t wait to see it!” That’s how awesome the relationship is, that they trust us 100%, and that’s what we’ve been looking for in a partner, someone that can just see our work and our portfolio and to just be like, “You girls know what you’re doing, go for it, we can’t wait to see the product.” So I think that’s what the biggest blessing has been for us.

TMS: One thing I’ve always been curious about with your videos is where you find such dead-on impressionists to do each of the voices. Do you hold auditions for the best Gollum, or do you just have a lot of talented friends that you seek out?

Hannah: We honestly have just kind of searched around, mainly on Youtube, and found a few people we’ve reached out to who sounded, for example, like Rick Grimes—

Hannah: Yeah, the Doctor from Doctor Who, Sam and Gollum—and some of them have been friends that we’ve know. For example, for Sam it was done by Andrew Bates, who played Mad-Eye in one of our Harry Potter parodies, so we’ve known him for years. Sometimes it is close friends that help us out, but then there’s also people that we search for, unknown talent on Youtube.

Hilly: Yeah, like the guy—I’m sure you’ve caught wind of the video, it was a Disney rendition of all the voices singing ‘Let it Go?’ He did the voice of Frodo and Gollum in this one, and he did some shouts for Sam. So that’s what’s fun about The Hillywood Show; we don’t care how many followers So-and-so has or how famous they are. If we see talent on Youtube, we don’t even care if they have one subscriber. We love working with people like that because we started that way as well. So it’s always cool to have people help each other and not just be like, “Oh, I need to work with someone who has over a million subscribers.” Whoever has the talent, you’re getting in our parody.

TMS: I’ve been told you two have a pretty epic story about Ian McKellan predicting your rise to fame. Can you tell me about that?

Hilly: Oh, that’s a long winded story! I’ll try to keep it short. In 2003, I won a trip to New Zealand because I entered a contest through AOL. You had to submit a video of yourself interviewing the cast of the Lord of the Rings, because the prize was that if your video was good enough, you could go on the red carpet and interview some of the celebrities and go to New Zealand. And so me being thirteen and being obsessed with Lord of the Rings, I entered. I actually came in the top 5, which I thought was a feat in and of itself because there was, like, 100,000 entires. So I was just excited to be in the top five, but my little heart back then had so much faith, like “I’m gonna win, I just know it, I gotta go this thing, I just have to, I’m the biggest fan!”

Thankfully a miracle happened and America voted for their favorite, and I was the winner. I was sent to New Zealand at thirteen years old and placed on the red carpet for the Return of the King premiere, and before I was on the carpet they said “You know, you might only get a couple because you’re not Entertainment! or Fox5, you’re just the winner, but we’re going to try our best to send stars your way.” That’s what I was told, and I had a book of four questions because I only thought I was gonna get four people. Next thing I know, celebrity after celebrity from Elijh [Wood], Sean [Astin], Peter [Jackson], Orlando [Bloom], Viggo [Mortinsen], John [Rhys-Davies], Ian [McKellan], Liv Tyler—every one that was in the movie came and let me interview them. And so you can only imagine my love for Lord of the Rings and how it’s just developed into this whirlwind, making me who I am today.

Then at the after party, I went up to a lot of the celebrities and they all had cute things to say, but I asked Ian for a picture and he bent down to me and stared at me for a while—and I probably just looked awful, I had braces and that thirteen year old nerd stare. But he somehow looked past all that and said, “You have stars in your eyes, and one day you’re going to be among them,” in his Gandalf voice.  It was so epic. And you know, when I was thirteen, I remembered it, but now that I’m twenty-four, I look back at that and am like “wow, those are really inspirational words.” They mean more to me now than they did when I was thirteen. It’s like, goosebumps. Those are words I’m gonna live by.

TMS: Now that this video is finally done and released, what’s next on the agenda for you? Can you talk about anything you’ve got in the works?

Hannah: It’s just pretty much whatever our fans are requesting.

Hilly: Yeah, I mean, some of the top requests—I’m not saying we’re going to absolutely do any of these—Sherlock from BBC, Supernatural, Maleficent, Guardians of the Galaxy, Disney throwbacks, Marvel movies—our fans are now really into requesting what they want because they kind of understand how our parodies work and how much we can do. They’re not submitting for Avatar or Spongebob anymore. I think they understand what’s possible. For us, I think it’s just been a perfect year to end with Lord of the Rings. Like I said, it’s just so special to us and we tried so hard to be who were are today—to even reflect anything that Peter Jackson has touched was such a challenge for us, but it was such a journey and we put such emotion into it. I’m like, “Oh my god, the feels in this video are killing me right now!”

You can find more of Hilly and Hannah’s videos at the Hillywood Show Youtube channel. Thanks to both of them for taking the time to talk to us!