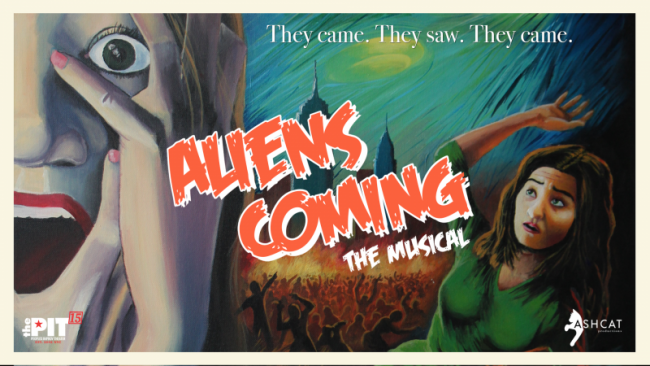 A few weeks ago, Kaila and I got to unwind after a week of covering more-terrible-than-usual news and went to the People’s Improv Theater in New York for Aliens Coming, a musical comedy from writer Joe Kelly, director Griffin Osborne, and music director Jonathan Evans about two high school senior girls, Clementine (Alice Kors) and Brandi (Maia Scalia) who find themselves at the center of an alien takeover. We were expecting some funny songs and dick jokes, but what we left with (along with funny tunes and dick jokes) was a greater takeaway about the intensity of female friendships and the relatable pains of relationships changing as sexual awakenings, college acceptances, and genital-harvesting aliens arrive.

Well, maybe that last one isn’t as relatable.

Anyway, these aliens from Flimpton, a planet that’s made to believe that sex is something terrifying and evil, plan to abduct Brandi and use her as a figurehead to harvest the genitals of the human race. They do this by making her Youtube famous with the help of the Amulet of Madness. The Amulet forces people to bend to your will at the price of—you guessed it—your mental stability.

Will Brandi and Clem be able to foil the plans of the nefarious Flimp Zooby Doober (Trvor McGhie)? What will happen when Brandi starts to realize something deeper about her own feelings? And wait, what about the blossoming feelings between Clem and helpless Flimp assistant Smib (Andrew L. Ricci) who is disguising himself as a human boy named Smike?

Charline: Aliens Coming takes a comically absurd B-movie premise and makes it work with self-aware dialogue and great performances. It opens with a rift between Brandi and Clem after Clem starts befriending the cool art kids led by cigarette-smoking Brooklyn (Ariana Raygoza). Clem tells her BFF she wants to go to Emerson instead of state school, which interferes with Brandi’s plan of the two joining a sorority together at State School. (P.S. Someone on this production really hates Emerson and it’s hilarious.) It becomes clear that Brandi already has some tyrannic tendencies and problems with control when it comes to Clem, and those sentiments magnify over time.

It’s all very high school senior year, and when Brandi’s most cutting insult to Clem is her spitting out that that Clem thinks she’s a Gryffindor when she’s actually a Ravenclaw was the moment I knew I’d love this show.

The main issue I had was that the ending felt quite abrupt. The solution to the great alien problem and the directions that Brandi and Clem go, without spoiling the whole show, felt pretty unsatisfactory and rushed. The way I described it to Kaila, was that we got this great collective “One Day More”-esque musical number and then it just…..ended shortly after. I’m not too mad about it because I’m sure there were constraints, and it’s probably telling that my biggest complaint is that there wasn’t more of the show.

Kaila: This show was so much more fun than I was expecting (after the week of news we had, I was down on pretty much everything). It’s clever, arch, tongue-in-cheek, and surprisingly sensitive to the intricacies of female friendship and the awkward growing pains of graduating from high school and trying to shape who you are and who you’re going to be. There’s also a heap of smart social commentary about our social media-obsessed society and its new brand of stardom. The songs are frisky and catchy.

And don’t forget about the aliens who are both exploring sex for the first time alongside the humans alongside their interest in sex for more nefarious reasons. The uncle and nephew alien duo are both wonderful in their roles and decidely hilarious.

While the ending is rushed, I think Charline and I were disappointed with it simply because we wanted and expected more after such a delightful evening. If you have friends who love both science fiction and musical theater, this is the show to go to with them.

Charline: The tunes are on Spotify if you’re want to give it a listen! Kaila and I kept looking at each other periodically and cracking up at the lyrics. Kors as Clem has a fantastic voice, and the way she moves from a romantic tune where she laments being called a “cookie freak” by her classmates (“You Can Go Now”) to an over-the-top sexy song (“Sex is Sexy”) is phenomenal.

Kaila: All I can say is that I’m still humming “State School” many days later.

Kors is the standout voice of the cast and she’s able to turn surface silly lyrics into something mournful and longing:

THE FEMALE LEADS AND GROWING UP

Charline: After the show, we talked a bunch about the intensity and occasional obsession we’ve experienced in our female friendships and Aliens Coming did a surprisingly great job capturing that dynamic. High school ending can be a terrifying and sad time, and lots of friendships end at graduation or fade away after college starts! Brandi acting out of fear of losing Clem is a pretty relatable thing, and while it’s clear that she’s not being a good or healthy friend you can’t help but sympathize with her a little bit. If you ask what happens when a troubled and isolated teenager gets way too much power and influence, well, Aliens Coming is probably pretty accurate.

It was also nice to see the two girls go through an awakening regarding their sexuality without it being a completely traumatic or terrifying thing, which you wouldn’t expect considering the musical’s premise involves predatory aliens.

Again, the ending felt somewhat unsatisfactory to me and the show kind of loses its footing in regards to this female representation, but I enjoyed everything leading up to it so much I kind of almost don’t think about it?

Kaila: Charline and I couldn’t stop talking about how true-to-life this musical about aliens, schoolgirls, and YouTube stardom portrayed the peaks and valleys of female friendship. I’m having trouble thinking of media that showed this better in recent memory than the love/hate intensity between Clem and Brandi. Especially at a younger age for a lot of women, the emotion of “I don’t know if I love you as a friend or if I’m in love with you” can feel blurry and confusing. “Friendship’s a cage / You swallowed the key” is something I’m still thinking about. The complicated connection they share, as evidenced by betrayals and reconnections, feels spot-on.

My primary issue with the rushed ending was that it felt as though we had suddenly veered into the ugly “kill your queers” trope. I don’t think the creators consciously intended this to be the case, but it threw me out of what had otherwise been a narrative I was 100% on board with. I’d love to see a sequel with certain characters resurrected and where they go next.

DO WE RECOMMEND IT?

Charline: For sure! Aliens Coming was such a fun and earnest show, and we laughed through the entire thing. Enjoy the songs, the silliness, and give yourself over to Grimp.

Kaila: Absolutely. The intrepid cast gamely takes on the story and the songs and transports you into the world (and outer space) of these characters by utilizing a small space without sets and with only the spirited accompaniment of a single piano. Everyone was excellently chosen for their roles and the majority of the show is light-hearted and hilarious, with surprisingly deep underpinnings. You’ll be singing along, and afterwards you’re going to find yourself calling your childhood best friend to say hey.

Aliens Coming is playing at the People’s Improv Theater until mid-September, you can grab tickets here.