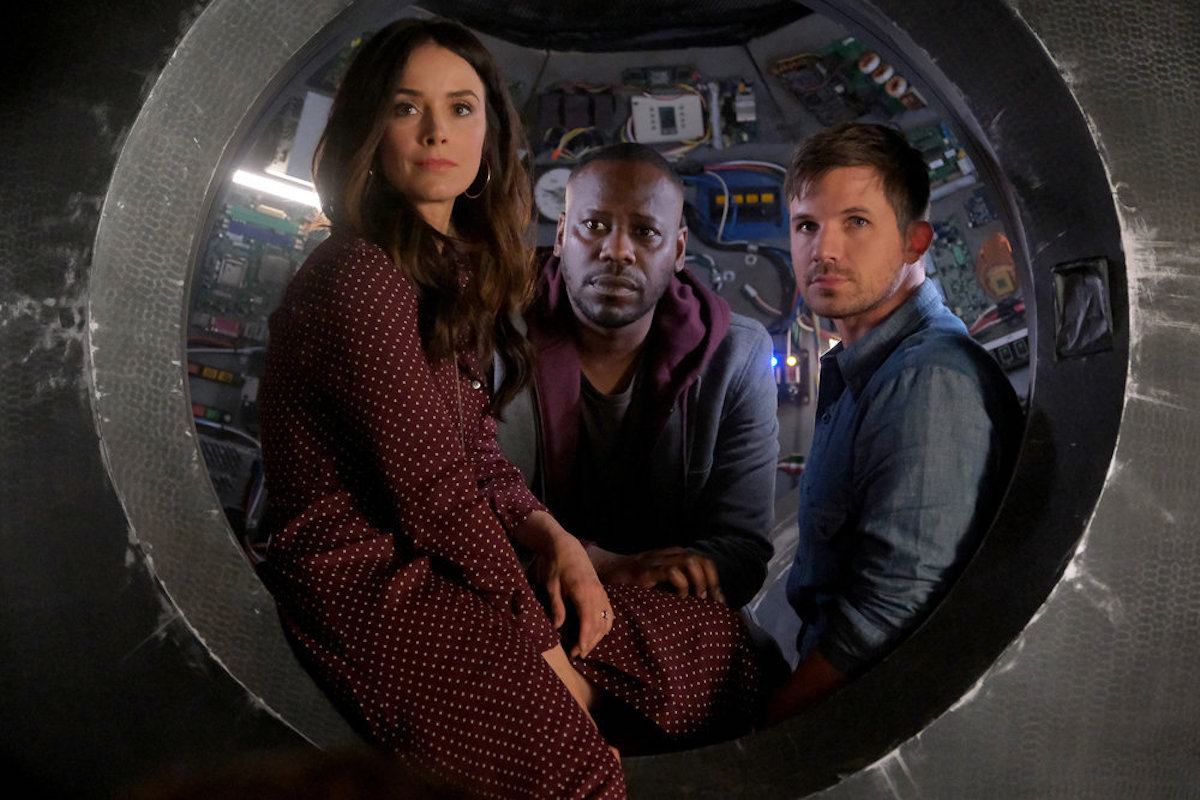 **Spoilers for the series finale Christmas special of Timeless ahead**

Seven months after its last regular episode, Timeless fans got a gift in the form of a movie-length (technically two parts), Christmas-themed series finale.

There weren’t really any big surprises in these episodes; they were exactly what we were told they’d be. Back in September, executive producer Eric Kripke said the special would be “basically the equivalent of two episodes.” He told Collider, “As a matter of fact, we tried, at one point, to do one long historical period to last over two hours, and then eventually, [co-showrunner] Arika [Mittman] wisely said, ‘Why are we doing this? Why don’t we just do what we always do, which is spend an hour in two different time periods?’ And so, though they’re connected and though it’s one long mythology story that plays over both, they really are, in effect, two time periods of Timeless that they visit, and we’ll shoot each one.”

And that’s what we got. Sending the gang first to the California Gold Rush and next to the Korean War in typical time-travel-mission-of-the-week style, these looked and felt just like regular episodes. Ratings for the special were nearly identical to those for any other episode. This was something for fans to come home to, not a big-budget attempt to get any new viewers. In fact, new viewers would have been totally confused, as the “previously on” opening was enough of a reminder of context if you’d watched the second season fairly recently. Otherwise, you’d likely be lost. No, this was just for existing fans–the fans whose numbers may be relatively small, but whose love of the show was enough to save it from cancellation once.

These two bonus episodes felt like a reward for that dedication. The special gave us much of what we went in wanting. Rufus was brought back, some time-travel paradox loops were closed, and the explanation of Lucy’s journal finally came full circle. Pretty much every major character got a satisfying end to their story.

😭 Flynn is important to the whole plan! #Timeless pic.twitter.com/20qoVC1x6E

But, kind of incredibly, nothing here ever felt like it was pandering to its audience the way these bonus wrap-ups sometimes do. This wasn’t cheap fan service, and it was obvious that the show’s creators still have the same depth of love and respect for the series and its characters they always did. For me, this was clearest in the decision to give Jiya such a fantastic fate, as she not only ends up with Rufus, but is finally celebrated as the brilliant programmer she’d always been. After two seasons of teasing storylines for Jiya that never really caught hold (what ever happened to those visions?), she at least got the ending she deserved.

While the show did potentially leave the door open for further seasons/specials/movies/whatever (there is a whole journal of unexplored missions, after all), this was a fitting and satisfying end. As it turns out, the show really benefitted from the format of the Christmas special, a uniquely British invention that’s been catching on more with American television in recent years.

In a great piece on Vox, Todd VanDerWerff wrote an argument for why more shows should adopt the format. “But we don’t really have a tradition like this in the States, where we tend to spend Christmas going to the movies,” he writes. “And that’s fine and all, but why should you have to leave your house? Christmas could be a wonderful season to revisit old TV shows you’ve forgotten, wrap up others that were canceled unceremoniously, and drop in on your favorites.”

[That] would be a much better way to populate the airwaves at the end of the year than just trotting out an endless onslaught of reruns and burnoffs. Why not resurrect beloved old shows and give them one-off Christmas specials, episodes that wouldn’t function as full revivals but would still give us a taste of long-gone hits? (Don’t tell me you wouldn’t watch a one-time Christmas drop-in to Cheers!) Why not give canceled series another episode or two to finish things out, like Timeless got? Or why not do super-sized editions of current favorites? Imagine a big, festive episode of This Is Us or The Good Place or The Conners running on Christmas night! Couldn’t that be fun?

I don’t know if the Christmas special will ever become a real American tradition, but we’re definitely seeing a small wave of great ones at the moment. (Looking at you, Chilling Adventures of Sabrina.) And if ever there was an example of the best things such a television event can offer to audiences–holiday spirit, plot wrap-ups, a feeling of spending time with old friends–Timeless just gave it to us.