Copernicus Was Born Today in 1473 | The Mary Sue 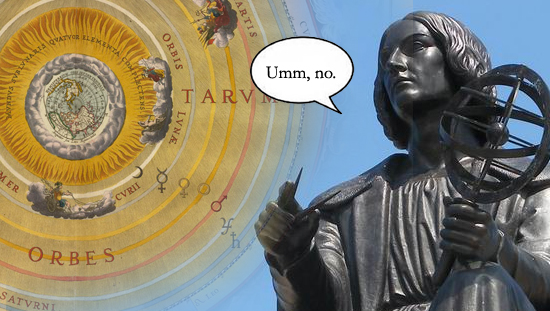 Some days you celebrate just because something happened on that day, and some days just because a person who did an amazing thing was born. Case in point: On this day in 1473, Nicolaus Copernicus was born, and he later posited that the Sun, not the Earth, was the center of the Solar System. But what else did he say?

Copernicus — a 10th-level multiclassed mathematician/astronomer — made quite a splash with his harebrained theories about the universe. Not only did he say that the Earth was not the center of the universe, he claimed that the distance from the Earth to the Sun was nothing compared to the distance to other stars (really?), that the Sun’s own cycle of movement stemmed from Earth’s rotation around it (no way!), and that the size of all planets’ orbits around the Sun related to their distance from it (whaaa?). Holy heliocentric, Batman! This guy was intense.

Accepting his essential axiom — that we are not the center of the universe — was kind of a huge deal for mankind, and in truth Copernicus didn’t live to see it. First he was chided by the Catholic Church and presumably yelled at by a lot of people, then he died the same year his seminal book on the subject was published, and really only his colleagues saw it. Poor guy. He and H.P. Lovecraft could have commiserated about their fates, but while one posited that the Earth wasn’t the center of all things, the other dreamed up some monsters who would just as soon destroy it.

Ultimately, some years later, it was the Italian Galileo who had the better PR — heresy is good publicity, right? — and who helped advance the astronomical theories put forth by our Polish friend Copernicus and others like him. Happy birthday, Nicolaus!

(image via Arenamontanus, and Norman B. Leventhal Map Center at the BPL)