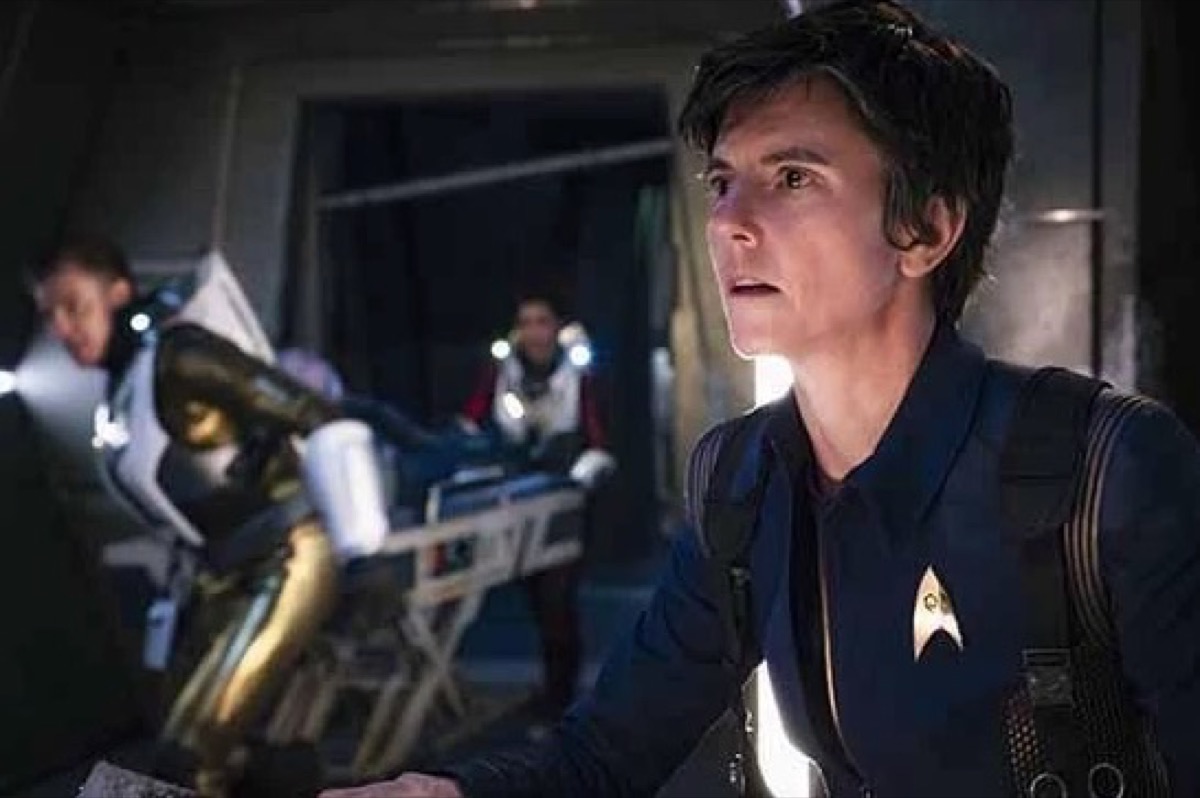 Over the course of the past two seasons, Star Trek: Discovery has taken its time to find its footing and truly lean into its own uniqueness as a fixture in the Star Trek franchise. Though it has faced significant backlash from certain passionate groups of Trekkies, it’s also received much praise for its high production value, ambitious storylines, and the diverse set of characters that inhabit the world of Discovery.

Although standout characters like Saru, Captain Pike, and Georgiou all deserve articles of their own, there’s one character who makes an enormous impact on Discovery while also having barely a quarter of the screen time. Jett Reno, the dry-humored engineer played to utter perfection by comedian Tig Notaro, is such a great addition season two of Discovery that it’s a crime that she isn’t a series regular.

In the grand scheme of things, Reno’s role is fairly inconsequential. More than any other Trek series, Discovery is fully committed to doing season-long story arcs, which means that there’s little time for lengthy character introductions unless they’re central to the plot. Where shows like The Next Generation take entire episodes to explore the nuances of a single character or relationship, Discovery (for better or for worse) instead focuses more on plot-based storytelling, and thus doesn’t have the time to slow down significantly enough to give a minor character like Reno a full backstory.

And that’s a crime, because when you have a character as dynamic as Commander Jett Reno, the last thing you want to do is underutilize such a vibrant personality.

Reno is first introduced in the season two opener “Brother,” when she’s rescued from the wreckage of her former posting, the USS Hiawatha. Reno, as we find out, has singlehandedly been keeping all of her injured crew mates alive. That’s right, Reno, who (if you forgot) is an engineer, figured out a way to keep a few dozen people alive with no formal medical background, because, in her own words, “[she] read[s]”. If that’s not the perfect introduction to who Reno is, I don’t know what is.

Unlike some of her colleagues—*ahem*, Stamets—Commander Reno has no ego to speak of and doesn’t feel the need to boast about her accomplishments or even accept praise for what she does. Instead, she’s much more in the vein of Doctor McCoy—opting instead to be the ever-practical, ever-snarky voice of reason who knows how to get the job done, even if it means getting her hands dirty. (On the subject of getting her hands dirty, another one of her most iconic moments is when she uses a wad of chewing gum to fix the Discovery.)

However, I think Reno should be bumped up to series regular for more than just her mechanical skills. Many of the complaints lodged at Discovery revolve around the characters—and how some feel that they can be dry and difficult to root for. Thanks to Tig Notaro’s background in comedy, Reno often has some of season two’s funniest lines, the most quotable of which being “I’m going, get off my ass! …. Sir! Get off my ass, sir!” Her sense of humor often comes at the expense of the stuck-up Stamets, she seems to get a gleeful joy out of irritating him to no end, and if I’m honest, I feel pretty gleeful watching it, as well.

Aside for humor, Reno also has an interesting past that could be expanded upon/utilized if she were to become a series regular. In a brief conversation with Dr. Culber, she reveals that she had a Soyousian wife who died during the Klingon war—a tragic aspect of her backstory that gives her personal stakes in Starfleet’s diplomatic relationship with the Klingons. Apart from the story about her wife, though, there’s not much known about what Reno was doing before (or even during) her time on the Hiawatha, so there’s a lot of wiggle room for Discovery’s writers to play around with her backstory, should she become a regular character.

But the most exciting thing that Jett Reno brings to Discovery isn’t her sharp wit, mechanical skills, or even the sight of Tig Notaro in a Starfleet uniform. The best part about Reno’s presence on the show is how naturally and interestingly she interacts with those around her. From Tilly to Stamets to Culber to Po, Reno’s presence in a scene instantly makes you perk up and pay closer attention to who she’s speaking with. If you’re not the biggest fan of the soap opera-esque Stamets/Culber storyline, Reno is there to tell them to get it together since they can’t hear your yelling through the TV screen. If you can’t help but marvel at Po’s brilliance, Reno’s there to comment on it for you. Jett Reno is such a relatable and lovable character that you can’t help but feel that, at times, she’s an audience surrogate—she says exactly what’s on her mind, and her lack of familiarity with the crew of the Discovery means that she’s a fresh (and very welcome) pair of eyes.

Whether she’s brandishing power tools or taking digs at Stamets, Reno is one of (if not the) best Star Trek: Discovery characters. Her fresh perspective on the people and events of the show, as well as her dry humor and virtually unlimited possibilities for further development, make her a prime candidate for a series regular as season three rolls around. Although she wasn’t in the NYCC trailer, we’re still holding out hope that we’ll get to see lots more of Jett Reno in season three of Star Trek: Discovery.