What Can We Learn From The Game Of Thrones Season 4 Episode Titles & Actor Hints? 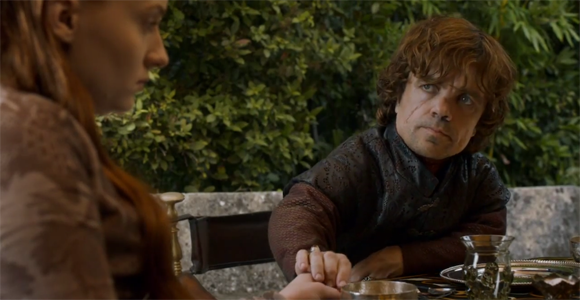 The first four episode titles for HBO’s Game of Thrones Season 4 have been revealed and actors from the show have been ramping up their press appearances. What have we learned? Read on to find out.

First off, here are the episode titles.

The title for episode one speaks to a moment in the novels I won’t spoil here but episode two, written by George R.R. Martin himself speaks to the impending nuptuals of Joffrey and Maergery. Episode three is a reference to Daenerys most likely (new favorite episode pending) and episode four sounds like it may be Kings Landing-heavy. What do you think? (Please make sure to mark spoiler comments with [SPOILER].)

“Brienne finds herself throughout Season 4 in situations that are unexpected and outside of her comfort zone,” she told them. “What I love so much about the show is we really see the expansion of the character — we see her move through different stages of development and we see her at Kings Landing, which is perhaps not a kind of environment that Brienne is used to negotiating. It’s a world of secrets, of words, of intrigue, and Brienne is a women of physicality and physical action. We see the development of this person as they negotiate another new world that they have no experience of.”

She also said she loves Brienne’s physicality adding she’s “never bored,” but also touched on how viewers might view her character.

“Brienne’s outsider nature as a woman gives us something that many women can tap into: the struggle of inequality or the struggle of being marginalized or the struggle of just feeling like you’re outside the party,” she said, “We’re presented in Season 2 with this big, tall woman who has these male affectations, and as the story continues we actually see a woman — we stop seeing, oh, look at her physicality. We see her in the situation rather than the situation impacting on her.”

Sherlock/Doctor Who’s Mark Gatiss will be making his first appearance on the series this season as Tycho Nestoris. He told Metro he wasn’t very familiar with the books and is “expecting an almost inevitably violent death.”

“I felt a bit overwhelmed by the response. When it was announced, people bombarded me with questions. I felt a bit of a fraud,” he told them. “Apparently, my character in the books actually comes in a lot later so it was a bit unusual that they brought it forward.”

He also said Game of Thrones is “filled with the fittest men on television” and wouldn’t be averse to doing nudity and/or a sex scene if called for. Carice van Houten will be happy to hear it.