The Sun is ramping up towards its peak activity in its 11-year-cycle, and it’s doing so in a big way. In one 24-hour period, the Sun has erupted with three progressively more intense X-class solar flares from the same region, each with its own coronal mass ejection. The CMEs are not heading in the direction of Earth, but could affect some spacecraft.

These flares are pretty powerful, falling into the X-class category — the most intense type of solar flare. As the Sun approaches the peak of its activity cycle, which is expected to be some point in 2013, it’s likely we’ll see more flares like these.

Take a look at this stunning image of the first flare. It combines two separate images taken at different angstrom wavelengths: Here are four images of that third flare taken at different wavelengths to help scientists better understand the event: 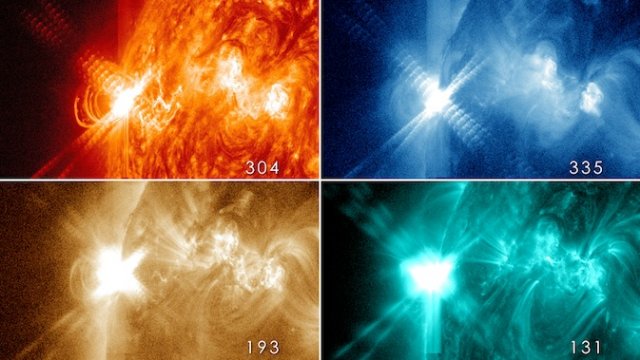 The CMEs also increased in intensity. The first CME left the Sun at 745 miles per second, which sounds incredibly fast, but falls short when compared to the second and third CMEs. The second traveled away from the Sun at 1,200 mps, and the third at 1,400 mps. In fact, the last CME is expected to actually catch up to the two earlier CMEs.

Although the region of the Sun these flares erupted from is not in the Earth’s view at the moment — which actually makes for some beautiful pictures — it will soon rotate into our line of sight. If the region stays active, that could mean future CMEs will head towards Earth and might cause problems for electronic systems and satellites. They could also lead to impressive displays of aurora borealis.

These three flares were the most powerful so far of 2013, but not the most intense flare of this solar cycle. That occurred on August 9, 2011 with an intensity of X6.9.

(via NASA, image via NASA/SDO/AIA)