By Odin’s Beard, You Can Read the Entire Thor: Ragnarok Script Here 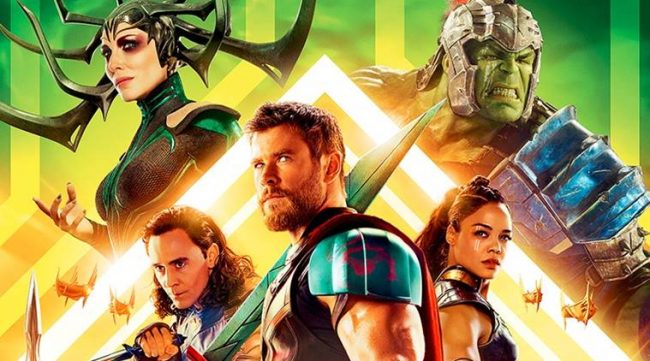 Disney released the full, hilarious script for Thor: Ragnarok as part of the film’s campaign for a Best Adapted Screenplay award, and now it can live on your computer as a PDF forever.

As someone with a passing interest in screenwriting, I love reading scripts from my favorite properties to see how the sausage got made—and Thor: Ragnarok was my favorite movie of the year. So it’s awesome to now hold the script in my grubby digital hands.

Ragnarok was written by Eric Pearson, Craig Kyle and Christopher L. Yost, Marvel folks tackling their first big movie. As Comicbook.com points out, these guys were relatively new to feature filmwriting—maybe a sign that Marvel should take more gambles on people previously untested by the Hollywood machine. Lots of crappy scripts seem to keep emerging from overpaid veterans, while this team created Ragnarok, now the highest-grossing Thor film and for some time the best-reviewed Marvel movie on Rotten Tomatoes.

Marvel Comics writers Kyle and Yost, who have scripted Marvel animated features and cartoons, made their leap to the Marvel Cinematic Universe with Ragnarok.

I also love this profile of Eric Pearson from a while back, detailing how he spent many years in Hollywood delivering pizza before being accepted into the Marvel Writer’s Program. Dream big, kids, you never know what may happen.

If you’re a Thor: Ragnarok fan or are curious about screenwriting, this is a really cool script to pour over. It’s remarkable how many beats the writers included that director Taika Waititi and the actors then translated flawlessly onscreen. Observe one instance:

As I go through the script there’s also a lot of fun flourishes you just didn’t get to see movie-side. 10/10 recommended reading. 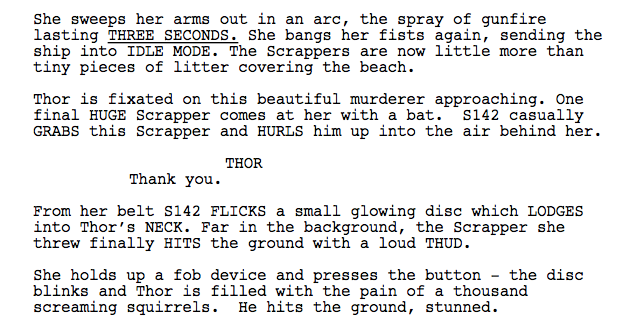 You heard it here first, folks. The pain of a thousand screaming squirrels brought down the mighty Thor, Lord of Thunder. Oops, sorry. God of Thunder.

[Thor: Ragnarok screenplay via Disney, images: Disney/Marvel)
Want more stories like this? Become a subscriber and support the site!