[Spoiler warning: the play-acted THOR 4D actually reveals quite a few important plot points, so if you want to stay unspoiled, this one’s not for you.]

It’s been a while since a video on the Internet made me laugh out loud and a lot, but this is “Thor 4D” is freaking incredible. Gaze in delight as the main cast of Thor: Ragnarok puts on a live performance of the movie that’s a little bit Broadway and a lot like your middle school play. Starring movie stars.

The Late Late Show with James Corden organized this absolute feast for our eyes and funny bones. Corden interrupts an advanced screening of Thor: Ragnarok a few minutes into the movie to announce that the audience is in for something else entirely. While I would have been pissed to have my viewing of Ragnarok suddenly cut short, I think I would have been more than satisfied with what came next: the stars of the movie, dressed in ridiculous cheap parodies of their costumes, play-acting pretty much the entire film in less than 10 minutes.

Everyone looks like they’re having fun, and the audience yells itself hoarse with cheering. I think my favorite performance is Tom Hiddleston as Loki, and his impressive “wig work.” Tessa Thompson isn’t given nearly enough to do here, but just wait to see the panache with which she stabs some bad guys. Jeff Goldblum’s entrance is spectacular. And Cate Blanchett emerging with a stuffed wolf is one of the best things I’ve seen in a long time. 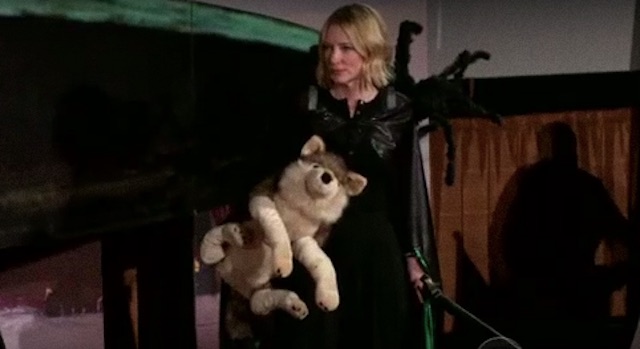 It’s fun to think about how the actors probably rehearsed this whole “live version” a time or two. Here’s to them all being game to kid around in pursuit of what is quite likely the best movie promotion ever made. Ever.