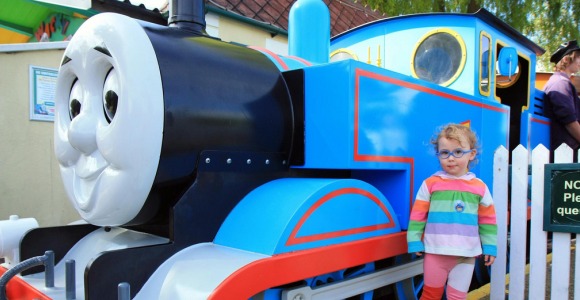 Parents, it’s never too early to teach your kids about fair gender representation in the media! Mary Creagh, the UK’s Labour shadow transport secretary, reminded us all that gendered social conditioning starts young when she pointed out that children’s TV shows unfairly portray transport jobs as exclusively male – particularly placing blame on Thomas the Tank Engine.

Creagh says that the lack of women engineers in transport can be traced to early childhood conditioning; girls are rarely portrayed on kids’ TV in transport jobs, something she called out as a “national scandal” (with which I’m sure GoldieBlox would agree). Creagh’s point is an important one; currently only 4.2% of train drivers in the UK are women. In the Thomas franchise, the gender imbalance is definitely true; all the main characters – all seven of them – are male. Said Creagh,

“In the Thomas the Tank Engine books there are almost no female engines. The only female characters are an annoyance, a nuisance and in some cases a danger to the functioning of the railway. […] There is a preponderance of men in the transport industry and I am very keen to unpack some of the myths that stop women from taking up what are often highly paid and highly skilled jobs.”

Citing the CBeebies show Underground Ernie as a step in the right direction – the show features a motherly, queen-like train and a younger, “hippy chick” train – Creagh did point out that the show’s main focus is still Ernie, and not the ladies. And it isn’t just books and TV shows that reinforce the stereotype; she also draws attention to children’s toys sold at Boots pharmacies in the UK, inscribed with “little cupcake” for girls and “train driver” for boys (though some UK retailers are breaking gender borders in stores). Creagh pointed out that,

“Girls sit at home and eat cake, boys are out driving the train. So it starts in childhood harnesses, and it goes up to the Thomas the Tank Engine books where there are no female engines. […] There are quite a lot of stereotypical attitudes in the industry. I was talking to one fright operator who said we think women don’t like working night shifts. And I said well, have you told that to all the NHS nurses who work nights in hospitals across the country and probably do it for half the pay of train drivers.”

The company that owns Thomas, Hit Entertainment, assures the public that they’re aware of the “historical imbalance,” but that “gender is irrelevant” to the trains on the Island of Sodor. Unfortunately, here in reality, gender remains super relevant. The pink and blue aisles at my local toy shop make sure of that.

(via The Telegraph, image via Barney Moss)