This Death Wish Remake Trailer Is the Most Disgustingly Right Wing, GOP-Ass Thing I’ve Ever Seen 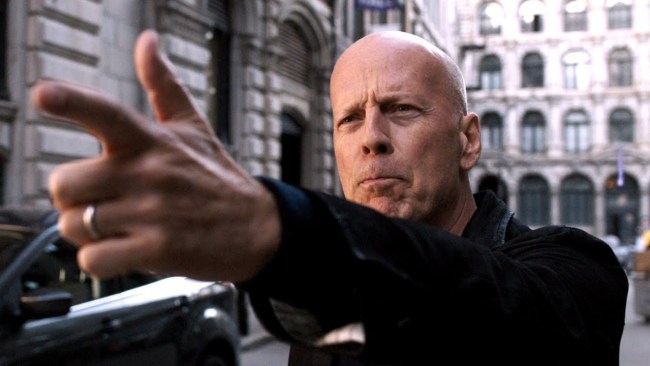 Eli Roth’s remake of Death Wish just dropped its first trailer this morning, and let me tell you: it’s the most NRA-centric, Republican thing I’ve ever seen—and I survived 2016. Here, take a look for yourself.

Yeah, so, let’s unpack this slowly. For starters, you’ve got Bruce Willis walking around with a death wish (ha, get it), motivated to take revenge on gangs and “thugs” (read: people of color) because his wife was killed (read: fridged) in a home invasion turned violent tragedy. Oh, and his daughter was also assaulted, because won’t somebody please think of the children? So, you know, it reeks of the most tropey, flimsiest excuse to depict violence against the most stereotypical of enemies. Basically Hollywood schlock, right?

In any other time or space, I’d write it off as such and not really care about the spectacle. But the thing is, this isn’t just any time, and this isn’t just any space. Look, we live in a world where people of color are assaulted and even murdered in cold blood simply for existing in public. We live in a world where such brutality at the hands of the police is approved of—nay, encouraged—by our fascist puppet of a president. And here, you’ve got a movie that not only dismisses such realities, it straight up flips them off and reinforces the harmful, damaging narrative of how white people are the only “good people” who can wield a gun.

For starters, this trailer is a huge advertisement for the NRA. It’s “Good Guy With a Gun: The Movie.” It’s narratives like these that spur people into believing that “one good guy with a gun” is enough to justify the countless lives lost to senseless gun violence every day—and let’s be honest here, even in the context of this film, “good guy” is pretty relative. So, you know, never mind the fact that the “good guy with the gun” is a harmful, damaging myth. Never mind the fact that the presence of a gun never deters violence; most shooters carry out mass murders with the full intent of either killing themselves or committing suicide by cop. No, what matters to supporters of this movie is that they get to watch someone like themselves do what they undoubtedly want to do in their own lives: kill people who aren’t like them, and do so while being thought of as “guardian angels” or “revolutionaries.” Sickening, right? But wait, there’s more.

Take a look at the shot of Bruce Willis’ character, Paul Kersey, talking to the little kid in the hospital bed. He’s asking him who was responsible for the violence that landed him there, and the kid explains that it was a gang leader who works in his neighborhood. So what does Kersey do? He goes and exacts revenge on those folks. I mean, surely, that scene of Kersey talking to the kid is going to be held up as some shining example of why this movie is totally fair to people of color and as a justification of the ensuing violence. But what that scene actually accomplishes is nothing more than the reinforcement of a “white savior” narrative that, once again, plays into the whole “good guy with a gun” myth that we’ve already established as damaging and harmful. The people of color in this film are presented as poor, lost souls, so unsure of what to do until some white guy with a gun comes to save them all. Like, wow. “He’s a guardian angel!” they say. That is some white man’s burden, colonialist, white savior bullshit, right? And this film is totally doing its best to push that. Come on.

Go ahead and take a look at how Kersey’s dressed throughout the trailer. He’s walking around exacting his revenge while wearing a hoodie with the hood up. It’s about as pointed a reference as you can make with this trailer: white guy walks around with a gun killing people with near impunity while here, in our real world, Black kids can’t walk around with their hoods up lest they be murdered on the street by “the neighborhood watch,” who get off scot-free. Please don’t forget: in 2012, Trayvon Martin was murdered in cold blood by George Zimmerman, a neighborhood watch captain (a “good guy with a gun”) who disobeyed police orders and chased Martin later gunning him down in the street. One of the bigger talking points around the murder was that Martin was walking around with his hood up, and thus was somehow thought of as more threatening because of it. (By somehow, I mean “due to racial profiling,” a.k.a. racism.)

Because I know someone’s going to try to argue it: no, him wearing a hoodie isn’t the same thing as what happened in Luke Cage. Anybody who tries to make that argument missed the entire point of Luke Cage as a show. Whereas Cage was given a costume similar to Martin’s as an homage, Kersey’s here feels like a direct poke at the tragedy, an unwelcomed take on the image of a hooded “guardian angel.” With Cage, the image was of a bulletproof Black man, a symbol of resilience in the face of continued state-sponsored police violence. With Kersey, the image is of a gun-wielding white guy, the veritable image of terrorism and fascism—at least, it would be, if the media and movies like this ever had the courage to say so. Alas.

It’s a remake. I know it’s a remake. It’s not news to me that it’s a remake. Please for the love of God, don’t @ me telling me it’s a remake. Thing is, that original was made in the 70s, and even then, it was a cult hit at best. It reeked of “political incorrectness” then, and given how little Hollywood has changed, I don’t expect it to be much different at all. “But you can’t judge it yet!” you say. “It’s only a trailer!” you argue. “There isn’t enough to judge it by,” you reason. But as I (and many, many others) say time and again, it’s rare when a remake makes up for the sins of its original.

If this trailer is supposed to be our first impression of this film, our first look before a full-on date, then this was the equivalent of the “ay wan sum fuk bb grl” dick pic DM.

And you can fuck right off with that.