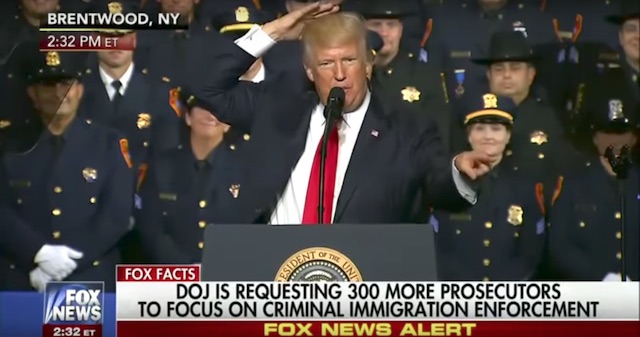 Addressing a group of police officers in Brentwood, New York, Trump encouraged officers to be more rough while arresting suspects. In other words, he’s encouraging police violence. You can check out his statement in the chilling video below:

If you don’t want to watch the video, that’s cool, I don’t blame you. Specifically, Trump said: “When you see these towns and when you see these thugs being thrown into the back of a paddy wagon, you just see ’em thrown in rough. I said please don’t be too nice.” He later added, “Like when you guys put somebody into the car and you’re protecting their head, you know, the way you put your hand, like, don’t hit their head, and they just killed somebody, don’t hit their head. I said, you can take the hand away, okay?”

The “paddy wagon” reference brings to mind the death of Freddie Gray, who was arrested in Baltimore and thrown in a police van unrestrained and unsecured. Gray was injured, fell into a coma, and later died because of the officers’ disregard for safety. Later, a court ruled his death a homicide “through acts of omission,” shutting down the argument that it was an accident.

That Trump encourages similar rough handling by police officers is no surprise. He’s established long ago that he just does not care about anybody or anything aside from how he’s being portrayed in the media. Straight up. But what’s most chilling about this video is the reaction of all of the police officers standing behind Trump as he delivers this “speech.”

You can watch as each of them starts to smile at his encouragement of rough treatment. It’s like they were just waiting (or not really, given how violent police officers can be with certain people) for a reason to give up caring about, well, anything aside from being violent towards those they arrest. It’s hard not to take such a reaction as more or less a confirmation that yes, these police officers are and always have been just waiting for encouragement and approval of these tactics, that yes, all they needed was a grandstanding president who has more machismo than sense.

While his words here certainly aren’t an executive order or an official directive instructing police officers to engage in police violence, it is absolutely an encouragement and approval of such destructive, fascist, authoritarian behavior. Trump seeks to empower an already over-powered, over-militarized, oppressive force against American citizens. If you think his words here won’t have a direct impact on how officers handle arrestees going forward, then you are not paying close enough attention to the news, my guy.

My dad was a cop. He despised the bad guys. But he always told me, “we’re the good guys and people should always know the difference.” https://t.co/1vK7IXvLeX

I certainly expect many folks to say “not all cops” are bad, but this tweet kind of sums up the general attitude of the public with regards to the authorities. Right now, the line between “the good guys” and “the bad guys” has never been more blurred. And that’s a major, major problem.