We Tested (and Broke) the ThinkGizmos Turbo Drone Micro Quadcopter, Here’s What We Thought

One thing's for sure: we're not getting recruited as drone pilots any time soon. 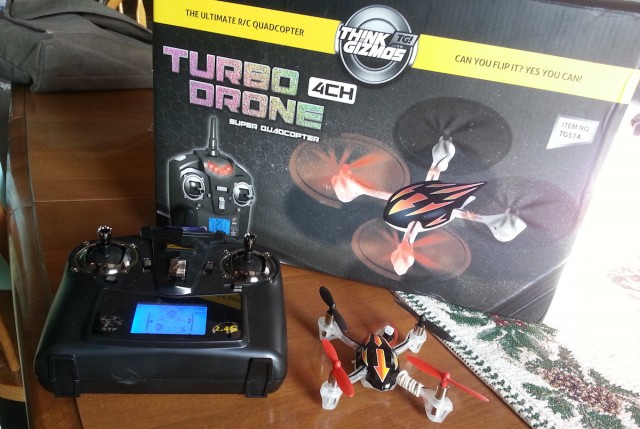 The nice people at Paramountzone.com sent us this adorable little drone to test out. It’s the ThinkGizmos Turbo Drone Micro Quadcopter. We had dreams of interoffice aerial dominance, but our hopes were dashed when we realized this thing takes skill to fly—skill we do not have.

We’ll start by saying that any problems we experienced with this drone seem to be entirely pilot error. The drone isn’t something you can just pick up and start flying immediately, and the included instructions make that clear. They even outline some basic flight lessons to get the pilot used to the experience. We did our best to follow those instructions, but could never really get the drone to hover gracefully, as it does in this video:

The instructions tell you to practice straight vertical takeoffs and landings for a while until you get the hang of it. They tell you to take off using only the vertical control, hover for a bit, then softly land. The problem we experienced was that in attempting this, the drone never simply went straight up in the air or hovered. It always seemed to have a direction it wanted to go.

The controller has trim settings for the different axes to make corrections for such things, but no amount of trim seemed to help, largely because each time the drone crash-landed (we are terrible pilots), it seemed to need to be readjusted.

This seems to be a function of the drone’s size and weight. It’s only nine centimeters wide, and weighs only 30 grams. It doesn’t feel very sturdy, though a better pilot could probably overcome this with the other controls.

The more practice we got with it, the easier it got to control the drone, but we got brazen and took it outside to see how it performed in the open air. We promptly crashed it on a roof, breaking one of the arms. (It’s why one of them is tied in the cover photo. We wanted to give it a little cast.)

In the box, there are some repair parts like extra rotors, but we were on our own to fix the arm. Luckily, it was a clean break, and a little superglue took care of things. We aren’t sure if the repair has affected performance any, because as we’ve already established, we are terrible at flying this thing. It’s going to take a lot of practice before we can use the drone to occupy The Mary Sue’s air space.

The drone comes with the thing itself, the controller, the extra parts we mentioned, as well as two batteries, and a charger that lets you charge them simultaneously, which is nice. Having the second battery really extends the time you can play with the drone, because while you’re draining one crashing into stuff, you can be charging the other. It does take a little bit longer to charge a battery than to use one up, but it’s certainly better than having just one.

One thing that’s very clear is that the drone is a lot of fun to try to fly, even though we ultimately just crash it into something. Someone with more drone-flying experience would probably enjoy it even more than we did, because we imagine the feeling of softly landing this thing without it bouncing off the ground a few times would be really satisfying. As you can see in the above video, more experienced pilots can even get this drone to do things like flips.

We unfortunately didn’t get this review up in time for Christmas shopping, but if you have a gift card or holiday bonus burning a hole in your pocket, this seems like a great introduction into quadcopter pilot-dom. Paramount Zone has it on sale right now on their site.

Update: Here are some Instagram videos we took of our sorry attempts at drone piloting.

Both times were simply attempting the get it to hover.