Things We Saw Today: “How to Explain Star Wars to Your Girlfriend” 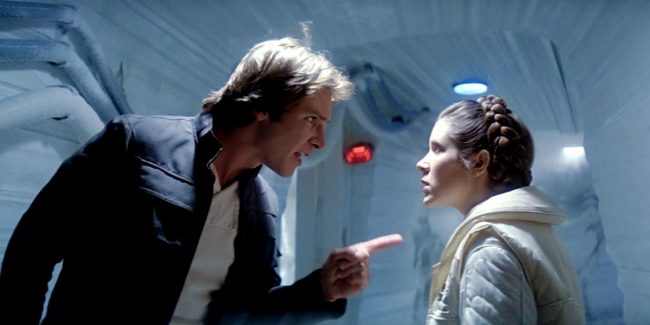 A post that clocks in as a 23-minute read, titled “How to Explain Star Wars to Your Girlfriend,” assumes that the little lady desperately needs your help to understand all these confusing characters and spaceships (“it’s called the Millennium Falcon, by the way”?)

you’ve got to be kidding me with this whack shit pic.twitter.com/xJYrms2aJW

The irony is that the rest of the article—past those first few paragraphs—is a comprehensive history of the Star Wars movies that would probably make for good reading for a newb to the universe. The problem is in the terrible framing device, and initial paragraphs like this:

She may find BB-8 adorable and her favourite character is Poe, but how do you explain to her why it’s so important that Han Solo and Chewbacca got back in that hokey old circular spaceship (it’s called the Millennium Falcon, by the way)?

So this imaginary girlfriend has already engaged with Star Wars enough to have a favorite character in Poe (that Oscar Isaac is so cute, the ladies love him). But she’s also waiting with baited breath to have all the rest of these really complex concepts laid out for her. “This has to be parody,” my friend said when I sent over the article. It’s not.

Had this simply not been gendered, it would really be fine. The post seems to be well-intentioned otherwise. “How to Explain Star Wars to Your Friend Who’s Never Seen A Star War Before” would’ve been great. It’s is a deep dive that takes you through the history of all the movies, written by someone who clearly loves Star Wars. But everything about needing to prepare your m’lady because “if you’re a hardcore Star Wars geek, it’s likely that your love won’t be complete until she understands your obsession,” wins the Olympic gold medal for mansplaining.

I put together an equally comprehensive guide for how to explain Star Wars to your clueless boyfriend/girlfriend/partner/person on the street/dog:

That’s it from us, what’d you see today?