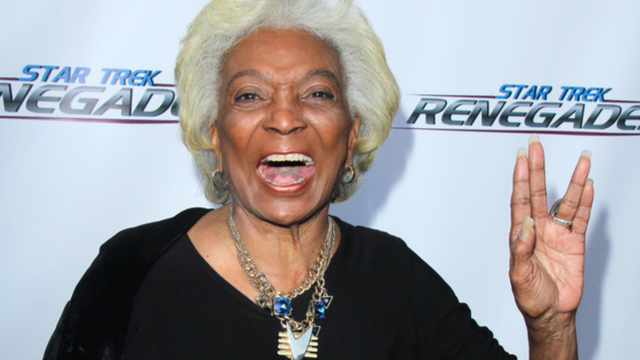 Today is Nichelle Nichols’ 85th birthday! You most likely know Nichols as the iconic Uhura from the original Star Trek series, but in case you weren’t aware, she’s still busy acting. In fact, she’s currently working on multiple projects, including a Star Trek parody titled Unbelievable! The LA Times has a brief but sweet interview with Nichols to celebrate her birthday. Here’s my favorite quote from it:

What drove me was probably what drove most performers: I’m an artist, and performing is what I do. So it’s my passion that drives me. There’s never been anything that can hold me back. Maybe it was my passion blinding me, but I never saw myself as a actress; I saw myself as me, Nichelle Nichols. My biggest obstacle, if anything, was trying to decide where to focus — on music or acting. They are both my passion.

People are also sharing touching stories about their encounters with her, or the influence she had on their lives.

My childhood role model, Lt. Uhura inspired me to learn to build radios and transmitters, and I remain a gearhead to this day. Happy Birthday to Nichelle Nichols! https://t.co/7lBSzRkjg3

My proudest moment of 2017 was making Nichelle Nichols laugh. I hope she has a spectacular birthday. https://t.co/OELQ95dpaR

I have a story to tell (a thread): https://t.co/xARiQENvwG

the wait is over
WORLD OF TOMORROW EPISODE TWO
tonight at midnight (EST)https://t.co/GvKYqzMCDi