The Theory of Everything Felicity Jones Interview | The Mary Sue

Interview With The Theory of Everything Star Felicity Jones 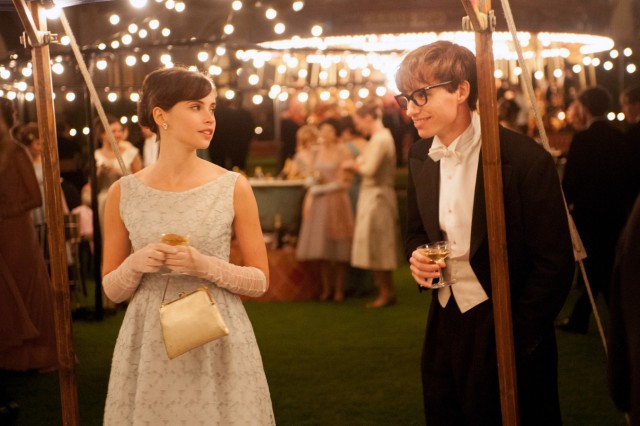 Felicity Jones uses the word “extraordinary” a lot, and in context of her role as Jane Hawking in The Theory of Everything, it’s easy to understand why. The Theory of Everything is a literally awesome film in many respects (stay tuned for our review next Monday!), and it came with a lot of responsibility for Jones and her co-star Eddie Redmayne. Earlier this month I was lucky enough to sit down with the movie’s cast and crew to talk roles for women, physics in film, and the indomitable, impressive Jane Hawking.

Reporter: How did you wind up in this role?

Felicity Jones: Well, as ever, there’s always lot of great actresses and not a lot of great parts, so I feel like, as an actress, you’re always fighting for the role. That’s always going to be the situation. But my process started with reading the script and just being completely blown away by this female character and realizing this wasn’t going to be a straightforward biopic, that this was a script that was exploring not only the very intimate aspects of Stephen’s life but also trying to understand who Jane Hawking was, and I just loved that it felt like it was new, and that it was telling a story that I hadn’t heard before.

Reporter: You not only had Jane the person to use as a resource, you also had her book [Traveling to Infinity: My Life With Stephen]. Can you talk about using all of these different resources to sort of build her?

Jones: It was a full-frontal attack on inhabiting this woman, so I read her book which was an amazing resource, but more than that was going to meet Jane herself. And as soon as I met her it was so exciting because there was so much rich material, it’s like being a detective. I met her, she opened the door, and she just had such warmth and this lightness and this way of moving…there was something about her movement. I remember just watching her pick up a cup of tea, kind of like how the Queen would pick it up, so I looked at all this footage of the Queen because there’s something about how Jane is this very, the ideal woman, this sort of very ladylike… even her voice, that was such a key element. I worked with the dialect coach to get that, I worked with a movement coach so that I could build the character not only from the inside but also from the outside.

What I loved about her was this combination of this petite woman who’s very ladylike, who’s very well spoken, but within her was this formidable, Grecian strength and I loved that she wasn’t…you know, so much now, it’s all about female characters being tough. And I feel like we’ve gone from being vulnerable to being tough, and it’s not that, its a combination of the two. And that felt so important that I was getting to play a character that was nuanced and human and had both that extraordinary capacity for love and could be fragile and  vulnerable but has a core strength and determination at the same time.

Reporter: So much of Eddie’s [Redmayne’s, as Stephen Hawking] performance depends on yours. Did you feel the same way about his performance in that sense?

Jones: Oh, absolutely. It’s almost like we were dancing with each other, and that came from watching footage of Jane and Stephen and their interactions. Even when he’s in the electric wheelchair, Jane becomes his body. When Stephen has a tracheotomy and can no longer speak, Jane’s almost having to read his mind, so the two become this one creature, they’re truly embedded in each other, not only emotionally but physically as well. But then as actors Eddie and I totally…it was a true collaboration.

We both worked in the theater together so we brought a lot of the same techniques, and we would have lots of rehearsal period very much trying to immerse ourselves in these people so that when we came to set we would be communicating as Jane and Stephen, and Eddie and Felicity would disappear somewhere. We would push each other. I remember I did a close up at the beginning of the film, and Eddie and I said “look, James [director James Marsh], would you just get rid of all the soundtrack, we’re just going to talk to each other throughout the close up,” which you can do in film. So Eddie would be saying ”I know you can do better than that. I’ve seen better than that” as I’m acting, and then I would do the same to him. We really pushed each other.

Reporter: The movie invites the audience into the intimacy of their relationship. Is that fair? How you decide what is the limit, what is for the public and what is not?

Jones: Well, I liked that it felt like there weren’t any limits. There’s a scene where Jonathan takes Stephen to the bathroom, and I’ve never seen that on screen before, another man helping another man go to the bathroom. That’s revolutionary, and the film does it in such a respectful way to everyone, but it is brave in showing that. And I think it was vital that it didn’t shy away from those moments.

Reporter: The film obviously gave you a greater understanding of ALS. What aspects of the disease were surprising? What kind of an appreciation did you get from that?

Jones: I mean the thing that surprised me, from meeting people with the condition and meeting caregivers and spending time with patients, is how they so quickly adapt to these really extraordinary situations. There was one moment where in the documentary footage you see Stephen being fed on the spoon, and [her and Redmayne] we both wanted to get that in the film, because it’s so important that you see. It’s sort of an idiosyncratic moment, but that was coming from not being able to swallow, so Stephen would actually have champagne on a spoon. Little details like that were always surprising. And, you know, because you lose the muscle in your neck so your head falls forward, so you see things like, for a carer it is just so second nature to be moving the head back and how instinctive it becomes.

Reporter: What do you think are the basic elements that turn a love story into a classic?

Jones: Time. We’ll see what everyone thinks in 25 years.

The Mary Sue: You spoke about how great it was to play a female character that’s tough but not necessarily physically tough, and also is allowed to be flawed and vulnerable. Are there any other particular roles that you would love to play that have those aspects to them?

Jones: I feel lucky that I’ve had opportunities to do that, and that’s always my ambition when playing these characters, is to try and show nuance. I guess I would just hope to be able to keep finding that, and finding women with different ideologies. You know, Jane comes from a  faith-based background, and as a contrast it would be great to play a sort of atheist.

Reporter: Do you know Jane’s reaction to the film?

Jones: I spoke to her recently on the telephone and she was very complimentary, she loved the performances and she said “you got my voice,” which meant so much to me because I was so obsessed with her voice.

I was so nervous before speaking to her because I thought this was just going to be terrible if she didn’t like it. It is a huge responsibility, because both of them, they’re so brave, and they’re rock and roll, you know? They truly are, and they don’t care what people think, and Eddie and I wanted to show that, show that humor. And with disabilities there’s so much awkwardness, people feel like they don’t know how to approach people with disabilities, and I feel like Stephen Hawking particularly has paved the way for it not being a complicated thing.

There was a story of, when Jane and Stephen were at a ball together and when everyone was dancing, they would sit on the sidelines. And then suddenly Stephen and Jane decided no, we’re not going to be on the sideline, we’re going to get stuck in and start dancing. So Stephen went with his electric wheelchair and was dancing around the floor and Jane was dancing around him, and it’s moments like that that show they were fearless.