A Review of The Wolf Among Us, Episode 2: Smoke and Mirrors. Also, Thoughts on Brothels. 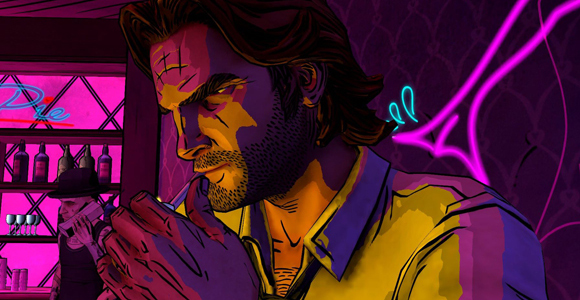 When I wrote my review of the first episode of The Wolf Among Us, I had qualms about Snow White. She wasn’t the Snow I knew and loved from the comics. It was the only thing I didn’t like about the game, but it put me off so much that I wasn’t sure if this series was for me.

I’m happy to report that my fears have been alleviated.

Shortly after Snow’s inevitable return, she and Bigby get into an argument about how involved she should be in solving her presumed murder. No matter how you play him, Bigby is hesitant about letting her take part in the case. Snow, on the other hand, is sick of being denied autonomy. “I already lost you once!” Bigby says. Snow fires back: “I’m not yours to lose!”

As the theme of urban desperation is now on the table, this is as good a time as any to talk about video game brothels.

Play a lot of games, and you will encounter a lot of virtual prostitution. “Brothel” is video game code for “grown-up,” and it’s become an almost laughably common inclusion. I say this not to give The Wolf Among Us a hard time for including such stuff — on the contrary, I’m fine with it here. I’ve just seen so many of these settings that whenever one appears, the first thing that goes through my head is “Ah, yes, the brothel level.” I can’t help but consider The Wolf Among Us in terms of that broader trend.

In most games (not all, but many), brothels are nothing more than titillating, incidental backdrops. Pick up a side quest, buy an imaginary drink, watch a pixelated lap dance, and feel like an adult. When brothels are given heavier narrative weight, it often gets weird. Quests in that vein touch on things like abuse or poverty or human trafficking — all worthy themes to tackle, but not when portrayed within the context of lap dance/imaginary drink/experience points. It’s hard to fully engage with the story of a woman who’s been mistreated when everything in the background is shouting “Hey, do ya wanna see some tits?!” Doubly so if the damsel in question flirts with you or offers sex when you save the day.

Smoke and Mirrors does indeed feature a brothel (okay, technically a strip club, with rooms next door) with narrative intent, but it does a lot of things right. For starters, the Pudding and Pie is a co-ed club. For every pair of breasts painted on its walls, there’s a rippling torso or a chiseled butt. The worker cleaning tables when you arrive is a blond, muscle-tank-wearing beefcake. I have to give props for that. Equal opportunity sex work is a rare bird in games, and it implies an intentional lack of assumption towards player demographics. High five.

Make no mistake, though, the Pudding and Pie is gross. Peeling wallpaper, tacky artwork, cheap lighting. I could practically smell the spilled drinks and stale cigarettes. The first thing you see upon entering is club owner Georgie (y’know, kissed the girls and made them cry) yelling vicious, degrading things at the clearly uncomfortable, nearly naked pole dancer practicing alone for him. Backstage, the cheeky promo posters are replaced with flyers for alcoholism support groups and suicide hotlines. It’s a miserable, totally unsexy place — in this case, exactly as it should be. Again, I’m not saying that sexy is bad, or that sex work is bad (under consenting, respectful circumstances). What I’m saying is that splicing sexy with sad morality tale sends weirdly mixed signals, and I’ve seen it happen a lot (not just in games; TV shows and movies do this all the time). Smoke and Mirrors avoids that trap by making it clear from the get-go that this is not a fun place and these people are not happy. The environment matches the message. The Pudding and Pie was an angering place to be, but I had the sense that a lot of thought went into creating that effect. If Bigby’s supposed to be livid at that point, I should be, too. 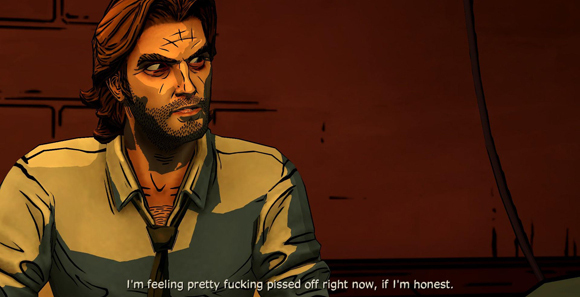 (Sidenote: The Pudding and Pie is not the only place you will find themes of sexual objectification and predatory behavior in this game. However, as expanding on that gets very, very spoilery, I’m going to hold off until the next episode. Just know that it’s there, and it’s creepy.)

You could make the argument that women being forced into sex work is a trope too commonly used as the go-to shorthand for social ills, and I’d agree with you. What I like about The Wolf Among Us, though, is that it’s not the only story being told (though it is used heavily), nor are tragic prostitutes the only type of woman being portrayed. Beauty (as in, “and the Beast”) is a desperate woman, too, but she’s taken a different path. There’s also Holly, the abrasive owner of the Trip Trap Bar, who serves as a reminder that discarded people are still people with families and loved ones. And though the current female characters are perhaps the ones most visibly affected by Fabletown’s troubles, they’re not the only ones suffering. Mr. Toad’s son TJ, for example, is a character I badly want to hug. This whole community is hurting.

That slow-burning feeling of something’s gotta give is what has me hooked. Though Bigby is the protagonist, the character getting the savior set-up is Snow (which makes perfect sense, if you know the comics). She’s still largely on the sidelines, but you can see the wheels turning. When Snow hears Fables despair over never getting the help they need — especially if they did all the right things and got hurt anyway — you can see the effect it has on her. She’s not going to let any of this lie. Bigby may be the guy out there busting heads, but I think he’s clearing a path for the lady in charge.

Combined with the same whip-smart dialogue and engaging gumshoeing as the first episode, Smoke and Mirrors stands, in my eyes, as the stronger of the two. An hour and a half of gameplay melted away in minutes, leaving me instantly hungry for more. I honestly don’t know where this mystery will lead, and I love that.