The Wolf Among Us, Episode 1: A Review of The New Fables Adventure Game

My wallet didn’t stand a chance against The Wolf Among Us. A new episodic adventure game from the makers of The Walking Dead, based on one of my favorite comic book series? That sounded like peanut butter and chocolate. A perfect combo. But after completing the first episode, I’m feeling more like the first time I had apple pie and cheddar cheese — pretty sure I like it, wondering if I prefer the two as separate entities, withholding judgment until I take another bite.

For the uninitiated, here’s Fables in a nutshell: Characters from legend and folklore, forced out of their homelands by war, are settled in modern-day New York City, doing their damnedest to blend in. (A friend who has not read the comics described the game as “like Once Upon A Time, if it was on HBO” — which made me laugh, as my exact words when I first saw OUAT were “oh, it’s Disney-fied Fables.”) The player is cast as Fabletown’s sheriff, Bigby Wolf (get it?), out to solve a grisly whodunnit that’s sure to get worse before it gets better. Don’t be mislead by the presence of fairytale characters — there is nothing cuddly about this story. This is a bloody, sometimes brutal crime thriller, complete with angry slums, lonely souls, and no end of neon and cigarettes. Like the comics, this game does a brilliant job of pairing childhood fictions with grim grown-up realities. There are laughs, thankfully, but they’re as rough and sticky as the counter of a dive bar. Forgotten stories and discarded people are the spotlight themes here, and I foresee a lot of heaviness in the episodes ahead. I’m fairly certain this is the first time an adventure game has given me the option to throw somebody into the side of a sink.

Despite the reservations I hinted at, the quality of this game can’t be called into question. Telltale knows what they’re doing when it comes to storytelling, and The Wolf Among Us is fine proof of that. I continue to be impressed with the new life they’ve breathed into the genre, distilling its traditional ingredients into something more tense and dynamic than the point-and-clicks of my youth. Morally vexing player choices are made all the worse (and by worse, I mean great) by fevered time limits, and the order of your actions can have a profound effect on their outcome. The game even does away with a staple mechanic I’m normally fond of — finding and combining objects to solve a puzzle — in the name of focusing on the plot. It works. By scrapping brainteasers, the player can devote herself to considering evidence and asking hard questions.

The story takes place before the events of the comics, making it an ideal entry point for both newcomers and long-time fans. Unlockable character bios will help newbies get up to speed, and there’s nothing in the story you won’t understand if you haven’t read the comics (though a greater context will certainly help). Those who have read them will get a kick out of seeing the pages come to life (the pirate ship in the business office! in motion!), and will have a deeper appreciation for the name-drops and cameos. However, knowledge of the underlying lore can be a double-edged sword. The impact of one dramatic moment is considerably lessened if you know how the comics go (not to mention the laws of the Fables universe). Still, knowing what happens post-prequel doesn’t ruin things. It just shifts your reaction from “OH NO” to “wait, whoa, how are they going to fix that?” Either way, you’ll be antsy for the second episode.

Playing as Bigby was a surprisingly unique experience. I’m the sort of player who rarely deviates from her own moral code when guiding a character. I may step out of my comfort zone from time to time, but for the most part, the characters I play end up aligning comfortably with myself. Bigby, on the other hand, is an established character I already know, and pushing him in my typical diplomatic direction felt weird. Even though his “nice” dialogue choices are still Bigby through-and-through (kudos to both the writing and the voice acting — I could hear him straining to keep his temper when I directed him toward civility), I found myself making choices I wouldn’t have with a fill-in-the-blanks character. Sure, I might not be inclined to knock heads without trying to reason first, but Bigby? Hell yes, he would. And so I knocked heads, and kicked in doors, and told people to eff right off, because I wasn’t me — I was Bigby. Almost instinctively, I allowed that separation to justify actions that were wildly different from my usual playstyle. I’ve never played any other game that way, not without forethought. The Wolf Among Us sunk its claws in deep.

It’s time to head into spoiler territory (comic book virgins, I cannot stress this enough). If this is your stop, let me leave you with this: The Wolf Among Us is solid stuff. Your mileage may vary depending on your familiarity with the comics, but either way, this is an excellent couple of hours with a lot of promise ahead. If you like adventure games, interactive storytelling, hard-boiled crime dramas, or any combination of the above, I recommend taking this one for a spin.

As for the rest of you — let’s talk about Snow White. 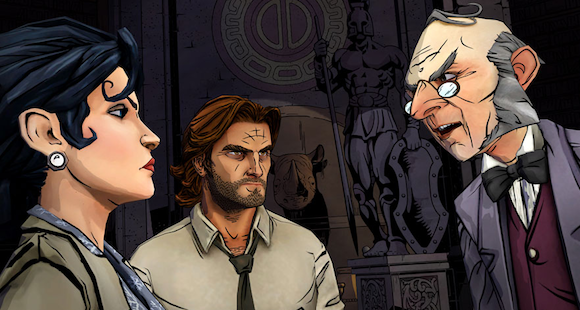 In some ways, I’m irked with myself for letting one solitary complaint color my playthrough as much as it did. It’s probably not fair. There are four episodes to come, and I can’t judge a character arc that isn’t complete yet, especially when I know where it has to end. I know that what I’m about to say is totally biased by my attachment to an existing character, and that ideally, I should consider this story within its own merits, not by those of the story that came before.

But I don’t like what they’ve done with Snow White. Not yet, anyway. And it bugged me through the whole thing.

I don’t think there was a Fable I was more excited to see than Snow. The comics are chockful of awesome female characters, and Snow’s a favorite of mine. She’s tough, resourceful, and thoroughly flawed, the perfect foil for Bigby — every bit as stubborn as he is, but with her head running cool instead of hot. I didn’t see that woman in The Wolf Among Us, nor did I see the woman who will one day run Fabletown, who will lead the defense against the Adversary. This Snow felt nervous and indecisive, and she didn’t trigger the same familiarity in me that other characters did. Bigby was Bigby. Colin was Colin. Beauty and the Beast were Beauty and the Beast. But Snow wasn’t Snow, not as I picture her.

Now, to be fair, there are two very good reasons for why I might be interpreting her that way. The first is that at this point in the timeline, Ichabod Crane has the director’s desk, and he’s every bit the scumbag boss that he was hinted to be during his brief appearance in the comic. Snow is his assistant. She has to bite her tongue and take direction from him. She also has to take direction from the player. Comic book Snow would never have deferred to Bigby as often as she does in the game — not without making her opinion damn well known first — but video game Snow is there to set up choices for the player. Can you imagine an adventure game where Snow puts her foot down with Bigby the way she does on paper? It’d be two hours of nothing but slammed doors and terse phone calls and sexual tension. A good read, absolutely, but likely not a good game. I’m cool with seeing Snow before she comes into her own, I’m cool with Bigby needing to be on solid protagonist ground, and I’m cool with this game not being the ensemble piece I’m used to. That said, I can’t help but wonder if there might have been a way to prevent Snow from compromising the player’s sense of agency without so thoroughly sidekicking her. What I loved about Snow and Bigby in the comics is that they always felt like equals, even when one of them was in the driver’s seat. Right now, I’m not getting that.

But I might. The way they’ve set this up, Snow could easily become her usual badass self by the end. There’s potential here for some juicy character development. Even so, I am having difficulty separating all these reasonable things I’ve laid out above from the emotional gut reaction I had as I played. For now, I’m cautious about where The Wolf Among Us is taking a character I love — but I’m curious, too.

I can’t wait to see more.