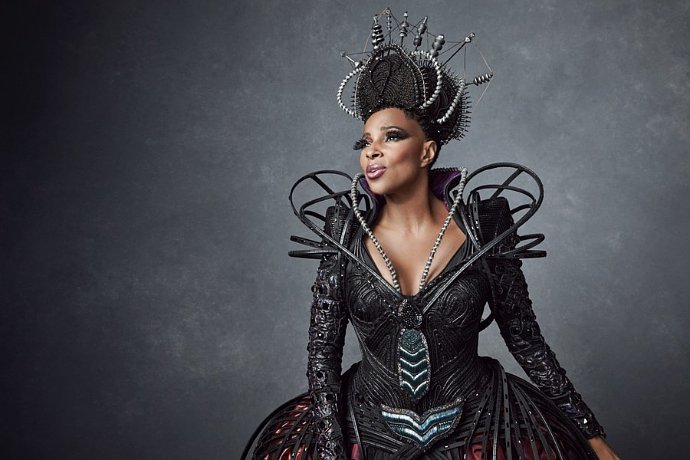 The Wiz Live! premieres tonight, featuring an impressive star-studded cast of greats like Mary J. Blige as the Wicked Witch of the West (pictured above), Queen Latifah as the Wiz (!!!), Uzo Aduba as Glinda — the list goes on and on! (And in case you were wondering — yes, Uzo Aduba can sing.) Although previous musicals in the NBC Live line-up (e.g. Peter Pan, The Sound of Music) have been a hot mess, at least we can rest assured that this one will sound gorgeous, what with the absurdly talented cast list.

That’s at least one reason, among a gazillion other reasons, why it’s sad to read through Buzzfeed’s round-up of people complaining on social media about the fact that the cast of The Wiz is made up entirely of black actors. First of all, this cast oozes talent, so how could anyone be complaining about the prospect of listening to them perform??? Second of all, The Wiz was an intentional answer to The Wizard of Oz — which, as we all know, had an all-white cast in its film adaptation. The music and structure of The Wiz originated with black creators and directors and an all-black cast. The entire show has, historically, been done by black performers, because the show being about black characters and about blackness is, well, the whole point.

But let’s drill down into one specific claim that keeps getting made by these clueless complainers: “There sure would be an uproar if it was an all-white cast.” “Can you imagine if we made an all-white version of The Wiz?” “If it was all white everyone start calling it racist.”

This is hilarious to me in particular because I have seen all-white productions of The Wiz. There’s no law against doing them, other than perhaps the laws of good taste. Where do these productions take place? At middle schools and high schools and tiny regional theaters across this great nation! Sometimes these productions are even free and open to the public. Are they good? Not typically, because they’re amateur productions casted from whoever already lives in the town. Are these shows racist? I’ve never seen a production in which the actors wear blackface, thank fucking goodness, although I have heard horror stories from my theatre friends about that happening in some places. Usually, though, it’s just a cast entirely made up of white people — usually children, because usually it’s schools that do this sort of thing — and their whiteness is never acknowledged. They just perform the entire show as written, with no changes, other than basic stuff like changing the keys of songs that might be hard for a kid to sing.

Why would this happen? Well, I think a lot of school directors and regional theatre directors get bored with doing The Music Man and its ilk over and over. Even if they live in a town made up of predominantly white people, they still might feel tempted to do a production of a great musical that happens to be about the black experience — such as Once On This Island, or Ragtime. And what about musicals that have some white characters but also feature a lot of black characters, such as Parade? Or musicals that historically feature black characters but which don’t necessarily make reference to that in the script, like Rent? Or musicals that would require a predominantly Asian cast, like The King and I or Miss Saigon? Trust me — all-white casts will do these shows regardless.

I’ve seen all-white productions of Parade and Rent and The King and I. It was weird as hell to watch. When I was in 6th grade, I myself appeared in my almost-entirely-white middle school production of Once On This Island, which is a musical that is about blackness. Specifically, it’s about colorism within mixed race communities, which is a pretty complicated issue that made absolutely no sense for our cast to be doing. I can guarantee you that this show was only done because our (white) director liked the music. I remember that halfway through the production, this director decided to change some of the song’s lyrics to remove any mention of blackness. It’s possible that he was having second thoughts about doing the show at this point — but of course it was too late to pull the plug by then. He’d already cast a lot of hormonal tweens, and secured the rights for the show, and so on. So we did the show, and it was weird, and people said things like, “What an interesting show! But I’m not sure I really understood the plot?”

Anyway! If a musical director had access to all of the talent in the world, and they were producing a show by black creators about the black experience, why in the hell would they cast anyone other than black actors? It’s not that it would be “offensive” to cast white actors in NBC’s production of The Wiz — but it wouldn’t make any sense whatsoever to do that, given what the show represents and what it’s about and what it intends to do.

I mean, one can theoretically point to something like The Wizard of Oz and say, “see, white people? You got your movie already.” But even that is a reductive argument, because The Wizard of Oz could theoretically have a more diverse cast, since the race of its characters isn’t mentioned — their whiteness is assumed, because white is the default, even in a fantasy land like Oz, where the demographics could be literally anything. And, actually, that’s exactly what a show like The Wiz could comment upon.

In The Wiz, the decision to have black creators and an all-black cast was an intentional one, not just a decision that happened “by accident” due to the structural racism of creative institutions like Broadway and Hollywood. That decision is one that’s understood by anyone who knows anything about the history of The Wiz.

Now then. Who’s going to be watching The Wiz tonight and live-tweeting it? Everybody, right?