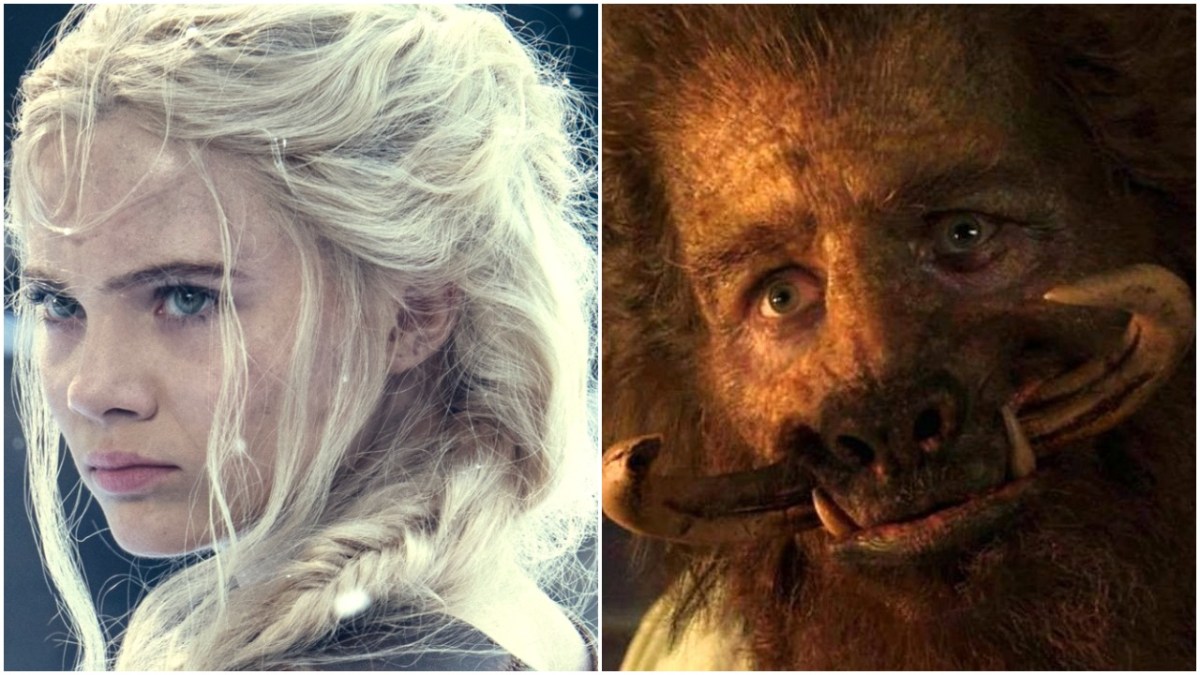 When I spoke with the wonderfully talented folks behind Netflix’s The Witcher, I asked each actor—and showrunner Lauren Schmidt Hissrich—which other part they would play on the show for a day if they could. The answers were illuminating, and they also teased some of what’s to come in season two.

I began with the powerhouse pairing of Kim Bodnia, who plays veteran Witcher Vesemir, and Kristofer Hivju, who appears as Nivellen—an old friend of Geralt’s with a dark secret and some formidable tusks. The two are excellent new additions to The Witcher’s second season, which bows on December 17th, 2021. 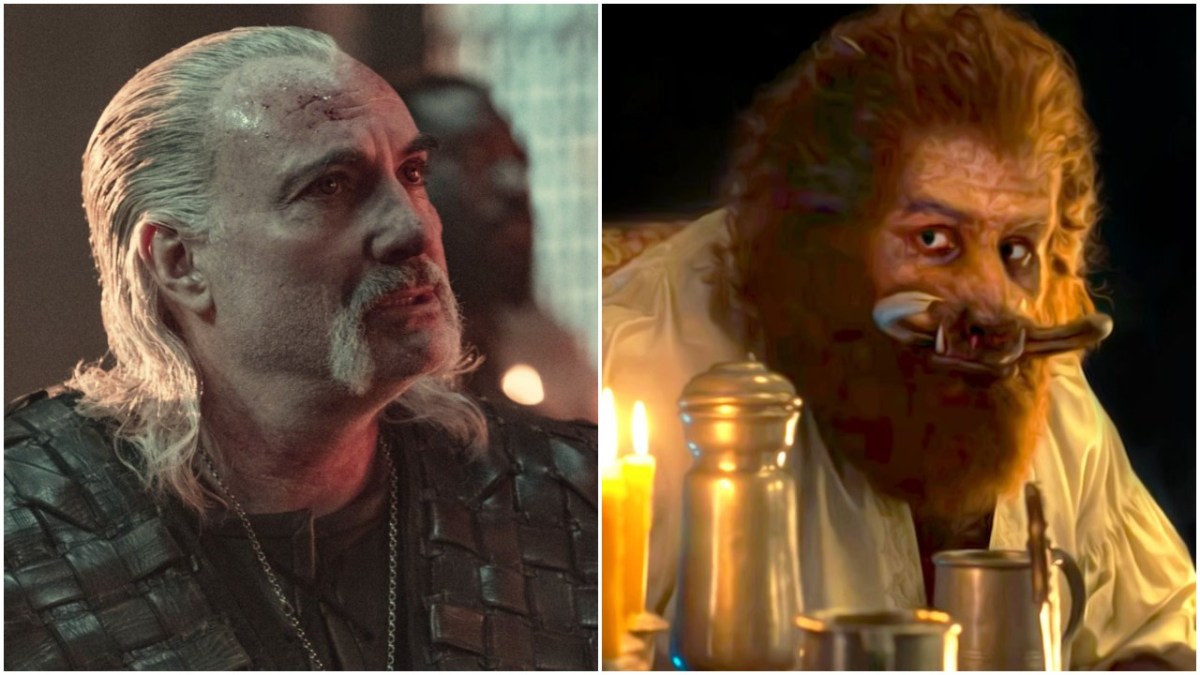 Bodnia said that he’d be game to play Hivju’s role for the day. “Your part,” Bodnia said, as Hivju laughed. “Wow, what a journey you were on. I would love that.”

Fans of The Witcher book series by Andrzej Sapkowski will know Nivellen’s tale from the short story “A Grain of Truth,” which also happens to be the name of the season’s first episode. But the episode has some surprises in store, and Hivju’s transformation makes Star Trek makeup aliens look like amateur hour. You’ll never think about Beauty and the Beast the same way again. 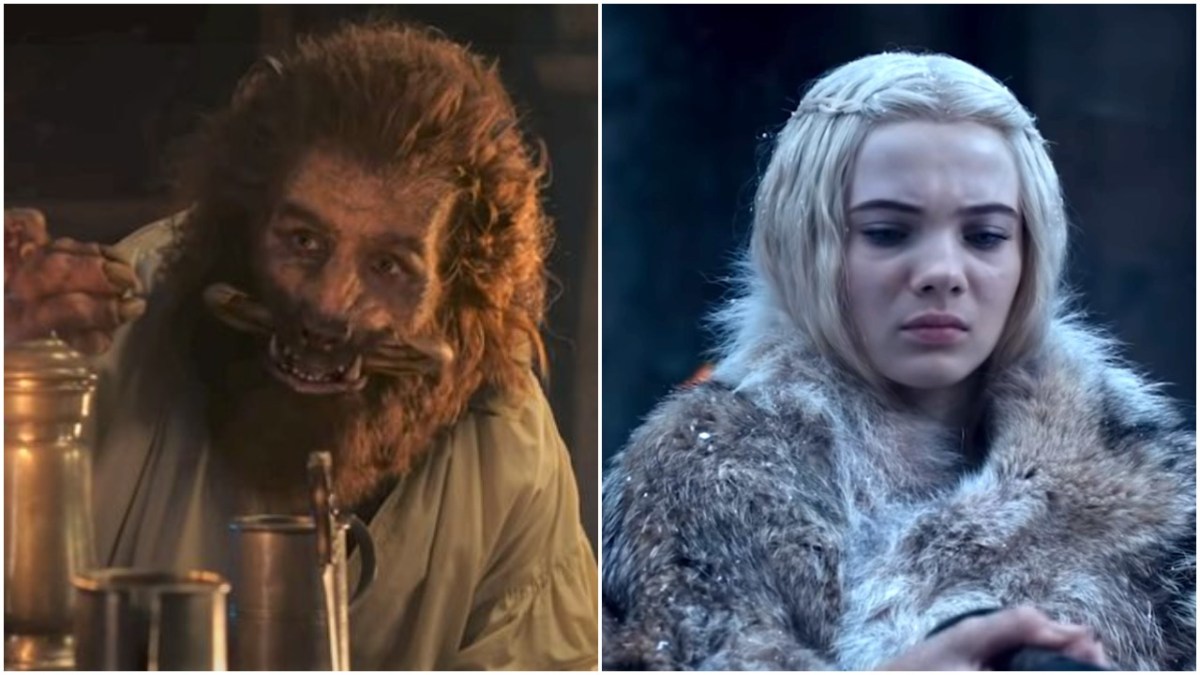 Hivju would shake things up even further. He said that he’d love to play Ciri—“and be in the little dress and everything.” We would also love to see this role switch happen.

Next I checked in with Joey Batey, who plays the Continent’s #1 hitmaker, Jaskier; Anya Chalotra, whose witchy Yennefer of Vengerberg manages to be both flawed and flawless; and Mimî M. Khayisa, who gets to sink her teeth this season into the nuanced role of the politically-minded sorceress Fringilla. 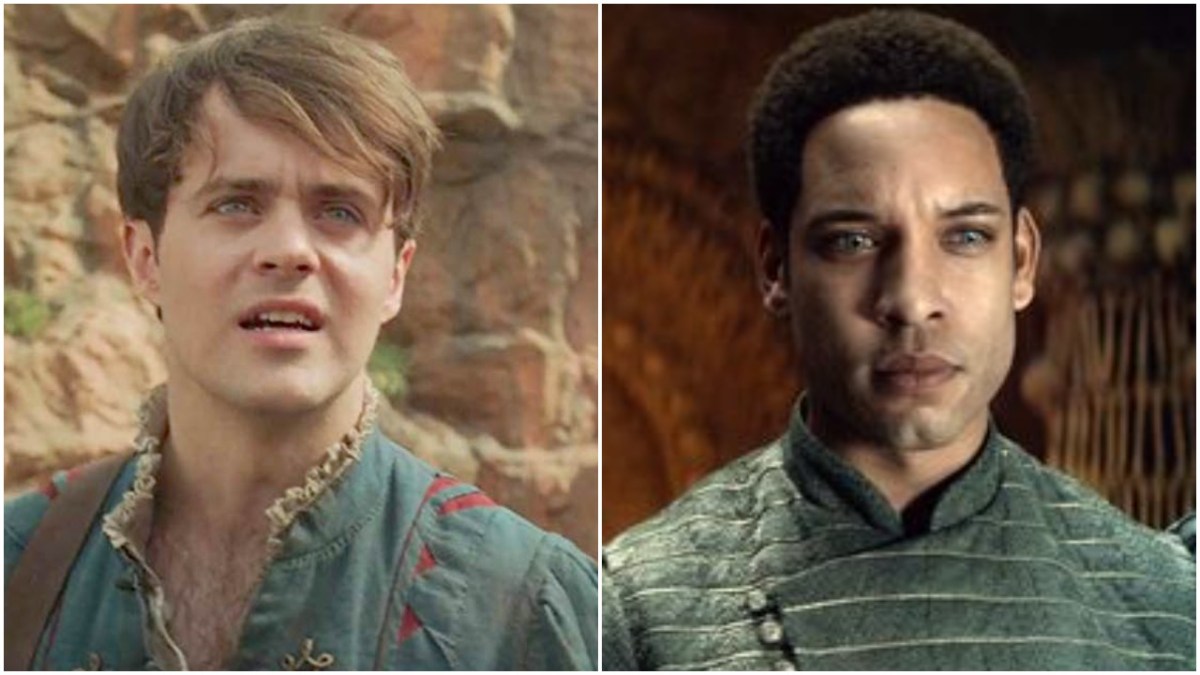 Batey expressed that he’d love to step into Istredd’s shoes. Istredd, played by Royce Pierreson, is a former flame of Yennefer’s as well as a sorcerer with a penchant for archaeology. His role is expanded in season two, and we get to see Pierreson in some fantastic scenes.

“I’d do Istredd,” Batey said, then immediately praised Pierreson’s performance. “But Royce is so good. I would just butcher it. I’d be terrible.”

Luckily for us in the viewing audience, Batey makes for a pitch-perfect Jaskier, and he may just have some new chart-toppers that you’ll want to play for ten hours on repeat this season. 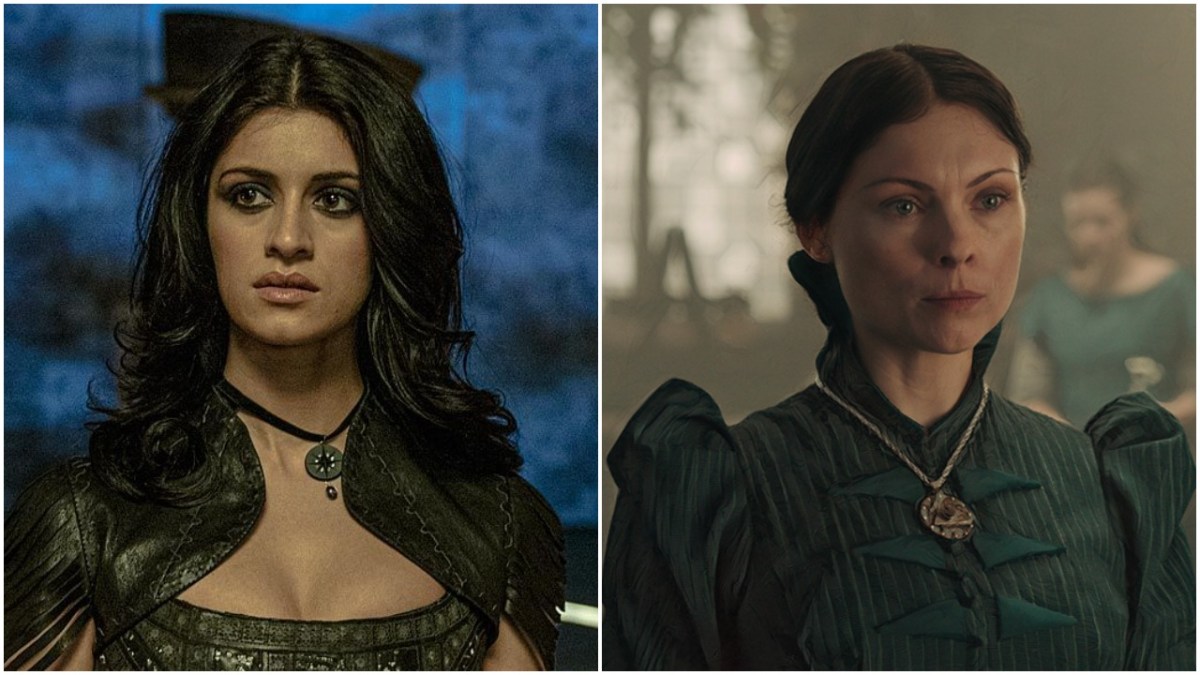 Chalotra was quick to settle (with some input from Batey) on wanting to try out the role of Tissaia, Yennefer’s sorceress mentor—primarily because of the fabulous work done by actress MyAnna Buring.

While we think that Chalotra would make for an incredible Tissaia-for-a-day, we have to concur with Batey and Chalotra—MyAnna Buring really is magnificent in the part. Buring is back in season two, and as per usual, Tissaia doesn’t have time for anyone’s nonsense. Especially Stregobor’s. 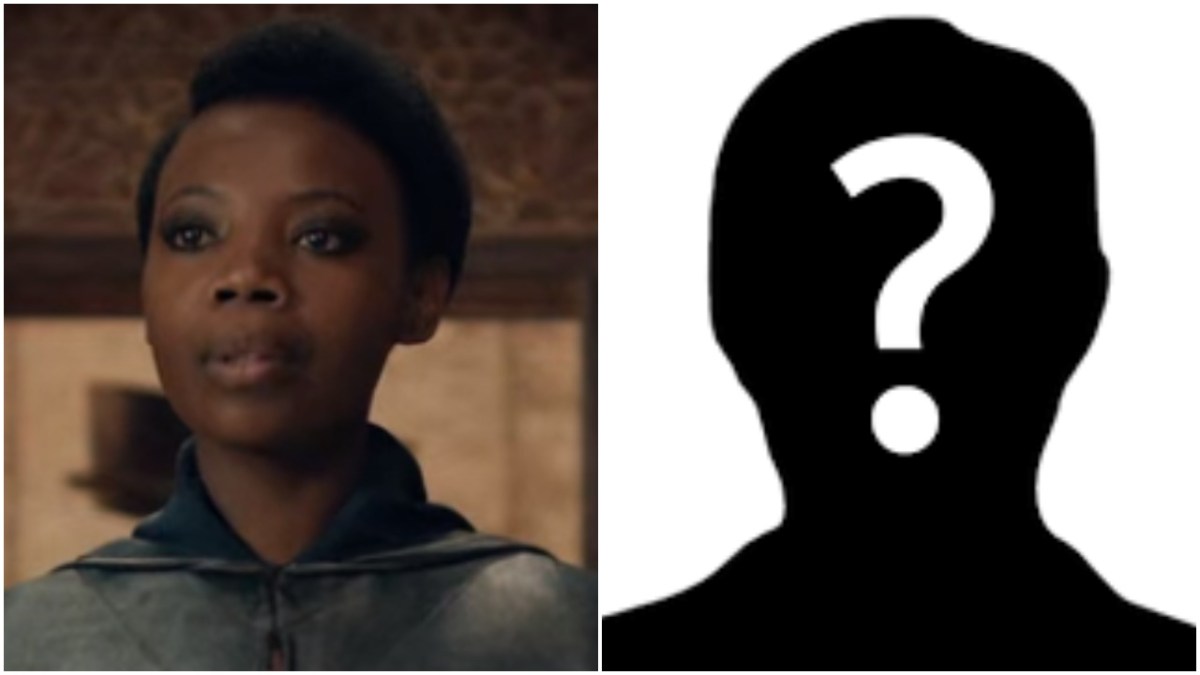 Khayisa’s answer was decisive, and came with a mischievous smile: “The White Flame.”

This elicited gasps from Batey and Chalotra. Then Chalotra declared, “The White Flame? Fringie!” while Batey made a “DUN DUN DUUUUN!” sound of suspense.

In the interest of sparing newcomers to The Witcher some significant spoilers, we’ll have to leave you to google that one at your own leisure/risk. 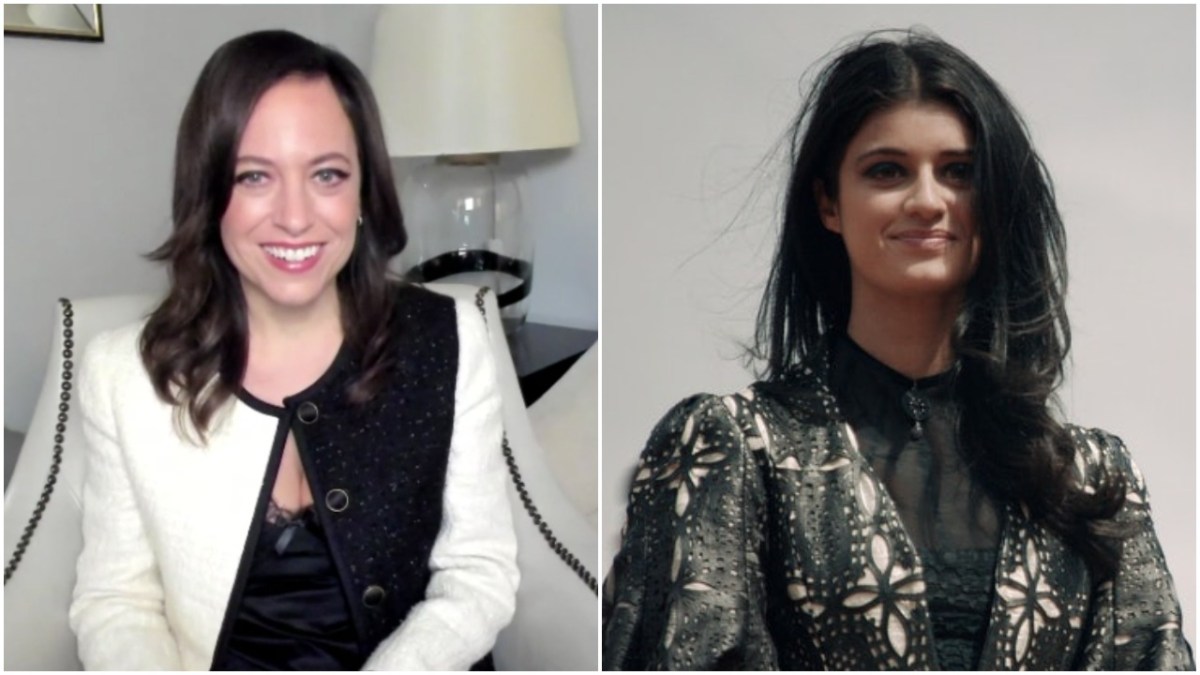 Showrunner Schmidt Hissrich was alight with enthusiasm for the character of Yennefer of Vengerberg, as played by Chalotra. We discussed how Yennefer is a rare female character to find on television—powerful, beautiful, the object of the hero’s affection, and yet far from cookie-cutter perfect. Yennefer has led a complicated life and doesn’t always do “the right thing,” though she sometimes finds her way there. Her multifaceted nature is what makes her so compelling—and that’s why Schmidt Hissrich would be eager to don one of Yen’s show-stopping gowns.

“Oh, Yennefer of Vengerberg, without a doubt,” Schmidt Hissrich told me. “I love the character of Yennefer so much because she is so abashedly imperfect. And I think this is something that we don’t see a lot—we see a lot of women who have to be perfect, or else they’re sort of written out of the story. And [Yennefer] has these low moments. She makes bad decisions, and then she has redemptive moments. It feels very real to me. This is the plight of all people. So I just think she is so layered and complicated and smart and wonderful. I would be her in a second, please. I’d love to be her.” 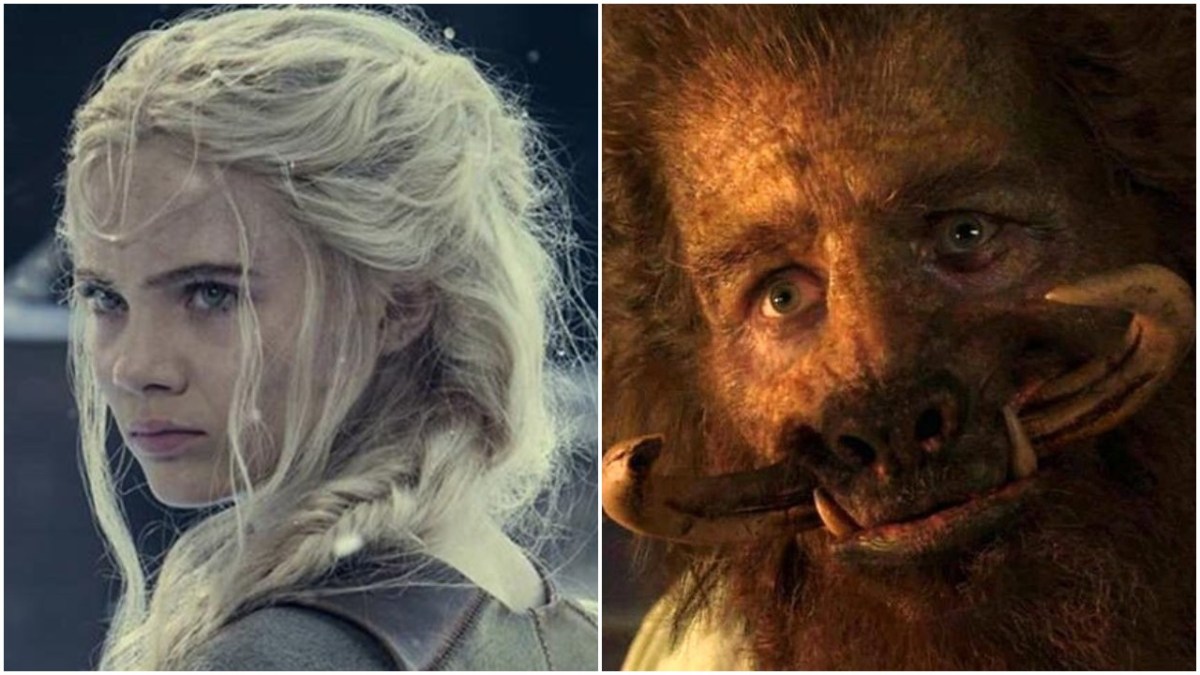 Allan’s Ciri undergoes some of the most profound onscreen changes in season two, but the actress thought it might be intriguing to take that a step further.

When I told Allan that Hivju had chosen Ciri as his dream role-for-a-day, she was thrilled, and decided that his part would be a great undertaking in return.

“Nivellen would be cool, so much fun. I’ll go for that,” she said, then described the intricate process Hivju had to go through to film this unique role. “It was hysterical because he had this camera that was attached—this thing that went around [his head]— and there was a camera there and he’d always have this thing. So he had a constant camera, and we found it so funny to joke that he was like a YouTuber who had a camera just following him around everywhere. The idea that that thing was constantly on, filming his actual face, was just too funny. So for that whole experience—and also he had to put on these hands and these feet and everything.”

“I think it would be a very unique experience to be turned into a beast,” Allan continued. “I’d be excited to see a beast version of me, you know?”

(Aside to The Witcher team: if you were to film some extras where we could see Hivju and Allan swap roles, fans would not be mad about it.)

No one in the cast elected to suit up in star Henry Cavill’s muscle-worn leather armor as Geralt of Rivia. That may be because Geralt’s got a whole lot on his plate this season, but I’m happy to report that Cavill has never been better. If Cavill were to play another Witcher role for a day, though, I think I’d vote for Jaskier. The man can sing:

The Witcher season two is headed to Netflix on December 17th, dropping all eight episodes for your binge-watching pleasure. Based on the six episodes I’ve seen, we are in for a treat. The series fully comes into its own and is a rich tapestry of found families, political intrigue, sorcerous shenanigans, star-crossed romance, fantastical fashions, and more monsters than you can shake an enchanted sword at.

Season two’s arrival means that your holiday viewing plans are sorted—and you can follow the hashtag #WITCHMAS on social media for every new bit of vital Witcher content.

If there’s any doubt who the star of the show is… #Witchmas https://t.co/rPI8BXooP7