Review: Before the Storm of War, A Gentle Wind Rises 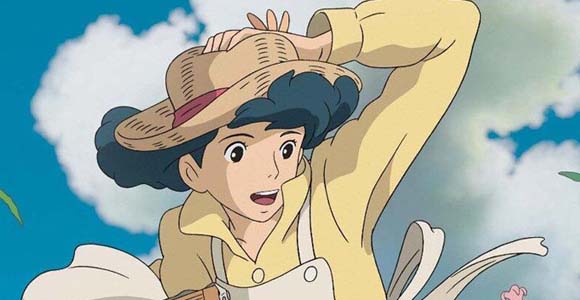 Hayao Miyazaki’s last film, The Wind Rises, kicks off with a very literal dream of flight. Our hero, the loosely biographied Dr. Jiro Horikoshi, is here a near-sighted, bright teenager who, unable to become a pilot, longs to become an aeronautic engineer. He dreams he is flying a fantasy craft with bird-like wings and a whooshing hydraulic engine, soaring above the farmlands where he has grown up, and waving to townsfolk below.

But his beautiful dream is interrupted by the appearance of a nightmarish ship emblazoned with the Iron Cross, carrying a payload of animal-shaped bombs. This vision, which startles Jiro awake, is a symbol of a world and a life to come, one balanced between incredible feats of ingenuity, and the maladies wrought by history. The Wind Rises shares this polarity. A frequently moving, absolutely stunning piece of animated work, The Wind Rises showcases many of Miyazaki’s visual obsessions, as well as themes that echo throughout his oeuvre. It also contains within its mesmerizing shell a number of questions on the morality of war and technology that, in spite of the great buildup regarding them, remain unanswered.

Mild spoilers beyond the cut.

A sometimes passive observer to the history unfolding around him, Jiro Horikoshi remains focused on his dream of designing beautiful aircraft, despite the stock market crashes, bank failures, and backwards ways of manufacturing he experiences. His only form of escapism is in a series of dreams featuring the Italian engineer Count Caproni, a fictional recreation of a real figure who counsels and encourages Jiro as he begins his career. Along his path to infamy, Jiro also meets and falls in love with Nahoko, a young woman who he had actually met years before, when assisting her and her handmaiden during the Great Kanto Earthquake of 1923. Nahoko is stricken with tuberculosis and, though his love for her can be a distraction, Jiro continues his long hours and hard work towards designing his dream aircraft.

Nahoko is a departure from Miyazaki’s usual brand of vivacious, complex female characters, which may come as a disappointment to viewers. A pleasant, polite character whose primary distinguishing trait is her tuberculosis, Nahoko’s storyline with Jiro is sweet and deftly handled, if bland in flavor. Throughout their courtship, from second meeting to marriage, one is reminded of nothing so much as a movie of the period, an evocation clearly brought about on purpose. However, the moments referred to by Miyazaki may not be as effective as those they recall so vividly. Touching and mild, the romance takes up too much of The Wind Rises, considering the lack of effect on Jiro’s overall character. There is no evidence that meeting Nahoko again brings any remarkable changes to Jiro’s career path, his design ideas, or his ultimate destiny.

The Wind Rises is rife with recurrent visual and thematic elements Miyazaki fans may well recognize. Among these is an apparent obsession with both aircraft and trains, as well as large, fully animated crowd scenes, and the symbolic use of elements and seasons to denote emotional states of characters. Dreams, permeable and sometimes, at first, indistinguishable from reality also feature prominently. The contrast between beauty and catastrophe emerges again and again, reappearing on a fateful train ride that, in a memorable sequence, turns into the tremendous earthquake.

Most significantly, the plight of the individual amidst a larger conflict, one governed by forces beyond his control, remains at the forefront. Jiro is not unmoved by what is happening around him, but nor is he swept up in the rising tide of war. His close friend, Honjo, discusses with Jiro the violent destiny of their creations, but Jiro does not seem particularly tortured by this revelation. Instead, he is accepting. In an earlier dream, Caproni, serving as Jiro’s conscience, asks if he would like to live in a world with pyramids or without pyramids. In other words, would he rather live without wonders, despite their sometimes dire cost? Though the question is presented, Jiro demures. There is no clear moral answer to such questions, yet I found myself wishing that Miyazaki had provided us with one, if only in the case of Jiro’s characterization. A dream at the very end containing a field of wrecked planes overgrown with foliage indicates the question is at least on Jiro’s mind, even subconsciously. But, except for these small hints, at no point does Jiro contemplate what he is bringing about. The film is less concerned with delivering strong opinions, serving as more of an adoring biography not only of Jiro Horikoshi, but of a period of Japan itself.

Japan and Japanese identity are key themes in The Wind Rises, particularly in contrast to European characters and behavior, and, by this contrast, this may be one of the most ‘Japanese’ of Miyazaki’s films. In long, unapologetic shots of landscapes, workers, and new cities, you can feel Miyazaki’s sense of wonder and reverence for his native land and its people. To my knowledge, this may be Miyazaki’s first time doing a straight-up historical piece, where the fantastic is overtaken by the delights of seemingly mundane details. To be sure, there is lavish attention to period detail in The Wind Rises, enough that one could suspect Miyazaki of romanticizing the era. But there is no denying the harsh realities he presents alongside everyday wonders.

The most harsh of realities is World War II, which, after a great narrative buildup, is touched on very lightly, perhaps too lightly. Relegated to an epilogue conversation in a last dream with Caproni, Jiro’s discussion of aviation and World War II boils down to the statement, “Not a single one came back.” There’s a fine difference between subtlety and under-expression, and Jiro’s one-line acknowledgement of his crafts use in the war against the Allies would be more heartbreaking if it was given more weight. Then again, a desire for a more obvious denouement may stem from a fear that Western audiences may not catch the significance of this line. The Zero fighter designed by Jiro Horikoshi was used both in the attack on Pearl Harbor, as well as adapted for use in kamikaze missions. Though these details may be inferred by those who know the history, the true price of Jiro’s dream might remain elusive to the average (Western) viewer. Miyazaki likes to leave things open, but this is an instance where picking a point to be hammered home could have made his work leave a stronger impression.

The Wind Rises is named for the Paul Valery quote “The wind is rising…we must attempt to live.” Valery also said that, “A work is never completed…for in relation to who or what is making it, it can only be one stage in a series of inner transformations.” Miyazaki has said The Wind Rises will be his last film, stunning audiences by moving back to the drawn manga which started his career. Yet he leaves behind a telling legacy of stories, of which this work is a definitive piece. Though it feels cut short by a rushed ending, The Wind Rises is, for the most part, a well-paced, expertly measured work made by a master at the end of his film career. If this is Miyazaki’s swan song – and it certainly feels like one – then it is a worthy sendoff for a creator who continues to evolve and transform.