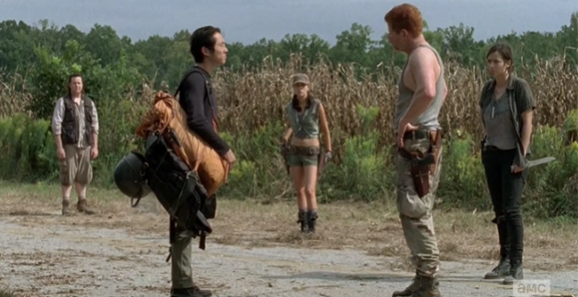 I reckon some people died on last night’s The Walking Dead? I don’t actually know that, but this is a show with a high body count. Let’s turn to Geekosystem‘s Victoria for our weekly recap, seeing as she still watches.

In this episode, we get some more bonding time between Carl and Michonne, and I have a new character to hate! Guess which one I’m thinking of right now. Go on, guess. Hint: he wears a mullet and he’s an idiot.

Last time on The Walking Dead, everyone went around trying to find each other post-prison break. Rick, Carl, and Michonne are in one group; Beth and Daryl are in another; Tyrese, Lizzie, Mika, and Judith all met up; Bob, Sasha, and Maggie went looking for Glenn; and Glenn broke his way out of the prison wearing riot gear with Tara and met up with a bunch of people who I’m told are dead-on-balls accurate versions of comic book characters that everyone’s been waiting to see forever.

We open on a bunch of walkers who are literally chasing after a deflated balloon that’s been tied to a stop sign. Awww, zombies! You’re so silly. The truck we saw in the last scene drives by and they stop to go chase that instead, because deep down zombies are just really bloodthirsty terrifying puppies. Tara, who’s sitting in the back of the truck, goes to shoot them until she’s told not to by the redheaded guy. He then jumps out of the driver’s side and stabs them all in the face with a crowbar. “Look at you, you’re a damn mess,” he says patronizingly to the remaining female walker, and then that one gives him trouble and he curses a bunch of times while trying to subdue her. Ha. Okay, I like this character so far.

Tara calls him out for smiling while he dispatched with the three walkers, and Abraham, whose name I’m guessing using very scientific deduction techniques (I looked up on Google), gives her this look: 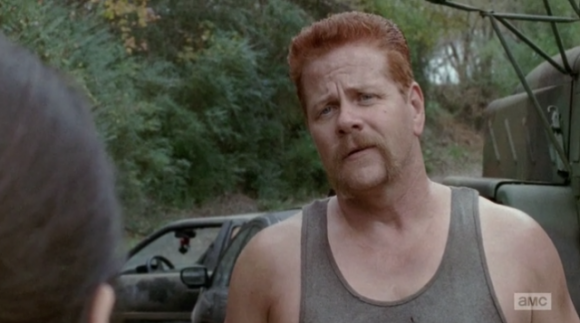 “I’m the luckiest guy in the world,” he says. Wait, what? Now I am fascinated by you, sir. Please don’t be too big a psychopath or something.

Read the rest on Geekosystem.