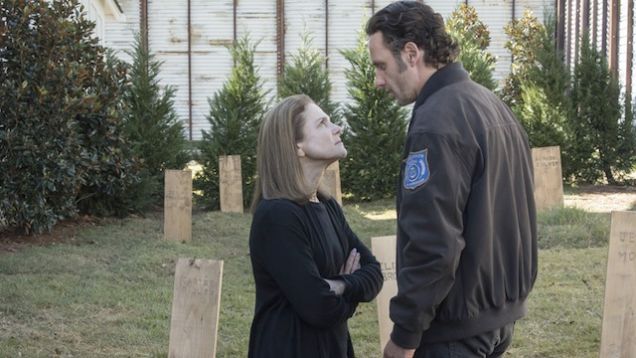 We’ve got a lot to talk about, so let’s get right to it. As always, there are spoilers ahead, so read on at your own risk.

We are officially one episode away from the season 5 finale, and things are most definitely starting to heat up in Alexandria Safe Zone. After last week’s episode, “Spend,” it was inevitable that the tension boiling just under the surface would finally come to a head.

Glenn, Nicholas, Eugene, and Tara all return from their supply run, and while Tara heals under Pete’s care, Nicholas goes to Deanna to explain the events that led to Aiden and Noah’s deaths. Unsurprisingly, he is a complete coward, doesn’t own up to his own actions, and tells Deanna that Glenn and Noah tried to abandon Aiden, and that Nicholas escaped the revolving door in an attempt to escape Glenn’s attempts to kill him, not in a disgusting display of selfish cowardice.

With Gabriel’s warning against Rick and the group buzzing around in Deanna’s head, she starts considering Nicholas’s account of the events, deciding if Rick and the group are good or bad news for Alexandria. We’ll get back to her later.

Meanwhile, Carl is out in the woods, following Enid, who is completely aware that he is tailing her. She eventually calls Carl out, and they start talking, bonding over their shared experiences in the wild, and their mixed feelings of leaving the wild to live safely in Alexandria. They come thisclose to kissing, and Carl gets thisclose to holding Enid’s hand, but they both chicken out. It was a very sweet moment, and while we don’t know a lot of Enid’s backstory, it’s safe to say the past couple of years have been just as tumultuous for her as they were for Carl. They both really deserve something good in their lives, and their budding romance is incredibly adorable.

Of course, this is The Walking Dead, so nothing sweet can last. While all of this is going on, Rick is looking into the allegations that Pete is abusing Jessie. Rick confronts Deanna about the allegations, and she admits that Pete’s abuse is a longstanding problem. More than that, the abuse was being largely ignored and excused because of Pete’s skills as a surgeon. Rick is, understandably, not cool with Deanna’s choice to let Pete continue without consequence. He suggests separating Pete and Jessie, and when Deanna presses him, asking what would happen when Pete refused to stay away from Jessie, Rick says they would have to kill Pete.

Deanna is not okay with killing Alexandria citizens, regardless of the offense. She suggests exiling Pete, but Rick doesn’t back down. He reminds her that life has to be different now, and that you have to take care of individuals who pose a threat to your people. By exiling Pete, all they would be doing is offering Pete the opportunity to return and attack Alexandria. However, Deanna doesn’t back down either. She tells Rick they aren’t killing anyone, and tells him that is the end of it.

Rick isn’t as ready to close the book on the whole situation. He goes to Jessie, and promises that he can help her get away from Pete. When she finally agrees to let Rick help, Pete walks in (looking a tad drunk), and begins throwing his weight around. Rick and Pete fight, fly through the window of Pete and Jessie’s house Bridget Jones Diary-style, attracting the attention of the nearby Alexandrians.

As they are fighting, something interesting happens. When Pete is on top of Rick, Jessie comes up to Pete to try to pull him off of Rick. Pete smacks Jessie off of him, knocking her over. When Rick is on top of Pete, Carl runs up to try to get Rick off of Pete, and Rick does the exact same thing to Carl. While I don’t think Rick would ever intentionally hurt Carl, and he would never abuse his kids or his partner, I think that moment showed us something very interesting in Rick.

Honestly, if Shane was still around, I think that he and Rick would actually be in agreement most of the time. Shane’s idea of right and wrong centered largely around what would and would not get the group killed or endangered. If keeping the group safe meant killing a kid from a roving street gang or finally dealing with the barn full of walkers, Shane would do it, and I think Rick is finally in that same head space, too.

Rick has watched his group be attacked, driven from their home; he’s seen them killed, he’s seen them hurt, he’s seen them threatened, he’s seen them even be eaten a little bit. Rick is done with trying to preserve that sense of right and wrong that he had before the apocalypse, and now what is right to Rick, is keeping his people safe. Anything that endangers them is now officially wrong. Pete was posing a threat, and all Rick was focused on was eliminating it–regardless of who tried to stop him.

The thing is, Deanna hasn’t been on the road as long as Rick. She hasn’t had to make those tough calls, see those unimaginable horrors, and she hasn’t had to harden herself in order to survive. For Deanna and most Alexandria citizens, life has been pretty calm for a zombie apocalypse. They have all been privileged enough to not have to work through an evolving system of morality given the drastically different, unforgiving outside world. So while Deanna isn’t the Governor and she isn’t Gareth, she is proving herself to be dangerous because she is untested and a bit naive.

Sure, Deanna is extremely intelligent, wise, and she has a great sense of leadership. However, her skills pertain to the world as it was, not as it is. When she comes in contact with someone like Rick–someone who knows that the monsters waiting outside the walls of Alexandria are not only walkers, but humans, too–she sees him as a barbarian and a monster. Maybe Rick is a bit of a monster, but he’s had to become this in order to survive and protect his group. Deanna hasn’t seen everything Rick has, so for her, the ends certainly don’t justify the means. At least, not yet. The episode ends with Michonne knocking Rick out, and then incarcerating Rick. Next week, we’ll see what Deanna and the group decide to do with Rick.

Here’s the thing: Rick (or Deanna, depending on how you look at it) is not the only thing threatening Alexandria. We’ve been seeing it for weeks now, walkers roaming the fields near Alexandria with giant W’s carved on their foreheads. We’ve seen dismembered bodies scattered everywhere, and in last night’s episode, Sasha takes out walkers right next to the wall with the W marking, and Daryl and Aaron came across a newly-reanimated woman (with a W on her forehead) who was tied naked, to a tree, and left as walker food. There are a lot of theories on who is behind this, but we still haven’t seen any living individuals behind these atrocities. However, we’re seeing a lot more of this mark, a greater amount of the grisly remains of their violence, and every week it seems to be inching closer and closer to Alexandria.

While I think a lot of the season finale will focus on Rick’s future in Alexandria, I think we are finally going to get a glimpse at the group behind the marked walkers and the dismembered bodies. My guess is that we won’t actually get a good look at them until the last few minutes of the episode (kind of like they did with Terminus). However, I think that this new threat is going to seriously cause Deanna to re-evaluate her rules and her moral code, because I think Alexandria Safe Zone is about to get pretty dangerous (you’re welcome for the Dad Joke).