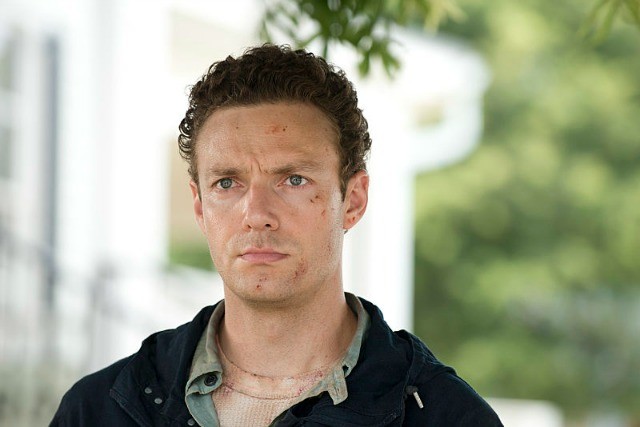 Be sure to check out my other recaps of this season of The Walking Dead!

Spoilers ahead! Read on at your own risk!

After the episode “Thank You,” the writers left us on a crazy cliffhanger: was Glenn alive or dead? I was certain that they wouldn’t let us go an entire week without revealing the fate of a fan favorite. Turns out, the show runners were totally cool with giving us a 90-minute episode that focused solely on how Morgan went from crazy guy writing on walls to a stick-wielding aikido master. It was great episode, and I was happy to get a bit of backstory into Morgan’s past, but couldn’t they have waited until after we learned if Glenn lived or died to give us that story? No matter. They surely wouldn’t make us wait another week to learn about Glenn’s fate, right?

Turns out, yeah, they totally would.

Also, do you remember how Rick was trapped in the RV as a walker herd closed in on him? I think we all figured he’d survive, but we were all dying to know how he would get out of that scrape. Welp, turns out we didn’t get to learn that either. The episode opened with Rick running towards the Alexandria gates, a herd right behind him. So … too bad there. I’m hopeful we’ll ultimately learn how he got out of the RV in a future episode, but we’ll have to see.

Those frustrations aside, this episode was packed. Deanna was not doing well after losing her son, her husband, after the attack on Alexandria, and then Rick leading a twenty-deep herd right to the city gates. It’s been a rough week for a woman who has essentially been riding out the apocalypse in a gated community. She spent most of the episode walking aimlessly around Alexandria and getting yelled at her drunk son.

As she’s processing the horrors she’s seen, Aaron confesses to the group that the Wolves found Alexandria after he and Daryl fell into a Wolves trap while out recruiting, and Aaron lost his bag—which led the Wolves right to Alexandria. Rick shoots Aaron a glance that I had a tough time reading—I’m not sure if it was one of anger, frustration, or understanding. Either way, he says they’ll talk about it more later, so we’ll have to see what comes of Rick and Aaron’s relationship. Regardless of Rick’s feelings towards what happened, it’s obvious that Aaron feels personally responsible for all of the death in Alexandria, and is looking for some way to try to make amends.

Meanwhile, Maggie decides to go find Glenn after Michonne explains that Glenn never sent the signal that meant he was okay. Maggie is understandably sad, but she quickly decides to go out and find answers on Glenn’s fate for herself. Aaron intercepts Maggie as she’s preparing to leave, and he offers to go with her to show her a safer way out of Alexandria—through the sewers. As the two travel through the sewers, they run into a few particularly gnarly walkers, only to find that the herd is too close to the sewer exit for Aaron and Maggie to exit safely. While Aaron is ready to charge into the herd to find out what happened to Glenn, Maggie stops him—and lets him know that she’s pregnant. Understandably shocked, worried, and a bit sad, Aaron concedes and the two head back to Alexandria.

Back in town, Carl and Ron get in a fight over going after Enid. Carl talks about going over the wall to look for her, and Ron promises to tell Rick if he does, which he assures Carl would just put more people in harm’s way. To be sure that Carl stays in Alexandria, Ron tells Rick about Carl’s plans. He also asks Rick to teach him to shoot. I’ll be honest, I’m not sure what to think about Ron. Is he really trying to keep Carl in the walls to keep everyone safe? Does he feel some sense of fondness towards Carl after Carl saved his life? Is Ron learning to shoot simply so he can protect himself? Or is Ron setting a scheme in motion to get Rick back for killing his porchdick of a dad and Carl for being Rick’s son and Enid’s friend? I’m not sure, but I know that I absolutely don’t trust him just yet, and arming makes him even more sketchy to me.

While Ron may have mixed feelings for Rick, Ron’s mom, Jessie, is seriously warming up to Rick. Not only has she upped her fighting skills, taking out a Wolf in her kitchen during the attack and putting down Walker Betsy this episode, but she’s also starting to deliver Rick-like speeches encouraging her fellow Alexandrians to fight against this new, harsh world. When Rick stops by Jessie’s place to talk to her about her change of heart, Rick and Jessie share a moment, and ultimately share a kiss. I’ll be honest, I’ve never shipped Rick with anyone really, but I am glad that Rick has got something happy in his life for once. Even better, I’m really excited to see what a badass Jessie is turning into. I’m not sure what this relationship will become, but I’m hoping they’ll prove to be a good match.

Speaking of new relationships, Tara and the newly-minted Alexandria doctor, Denise continue to bond this episode. Tara stops by the doctor’s office to give Denise a bit of a pep talk while she cares for a very injured Gabriel. After the shock of her new role and the attack on Alexandria, Denise is understandably having a tough time adjusting to her new role. Tara encourages her to keep fighting, and assures her that she can rise to the occasion. Tara’s pep talk ends up landing, and Denise is able to figure out a method to help fight Gabriel’s infection. Fresh off the high of that medical win, Denise finds Tara and kisses her. Tara’s shocked, but generally seems into it. I’ll be honest, I ship it. We’ll have to see where the relationship goes in the episodes to come.

After spending most of the episode in shock, Deanna finally snapped back into action. After coming across a walker, she went nuts, stabbing it repeatedly in the chest. It’s unclear if she was simply releasing some rage, or if she was the last human on earth to learn that walkers can only be killed by a head shot. Rick runs in to kill the walker, and Deanna, covered in blood, tells Rick that she’s ready to live and ready to fight. Of course, she’s so amped up that she later walks up to the gates and hits them, angering the walkers outside, but ultimately I think her new found bravery and resolve is a good thing.

Alexandrians had written the names of the deceased on the city walls, and had included the names of those who didn’t return like Glenn and Nicholas. At the end of the episode, Maggie goes to erase Glenn’s name from the wall. Aaron comes over to help her, erasing Nicholas’ name (sorry, bro, he’s super dead—no debate), and makes her smile by mentioning, when Glenn returns and they name their new baby, Aaron/Erin would be a great name for a kid, regardless of the baby’s gender. It’s a sweet moment, essentially locking in Aaron’s role as the kid’s Alexandrian uncle.

This episode showed us some serious development happening in Alexandrians, and they’re finally starting to see how their insulated life has made them far too soft to survive in the world. While there is still some resistance to the Ricktatorship, it seems like more and Alexandrians are realizing that they need to make a change if they want to continue to survive. I love watching the Alexandrians process the cruelty of the humans living beyond their walls and the huge danger that walkers present when they’re found in large herds, but COME ON. How long are they going to make us wait to find out what happened to Glenn? There are three episodes left in this year, and I’m getting really concerned that we’ll get to the mid-season hiatus without any answers. We keep getting these new episodes with some great character development—which is great—but I can’t immerse myself fully because I’m so focused on figuring out what officially happened to Glenn. It looks like next week will be a Daryl-focused episode, but since he’s outside the walls, I’m hoping we finally get some official answers on Glenn’s fate.

What did you think of this week’s episode? Do you think Deanna’s newfound resolve is going to be helpful, or is she going to become a liability? Do you think Rick is angry with Aaron? Can we trust Ron? What do you think of the new couples introduced this episode, Jessie/Rick and Tara/Denise? Let me know that and any other episode thoughts you have in the comments!