All life has value—even if you're with the Wolves. 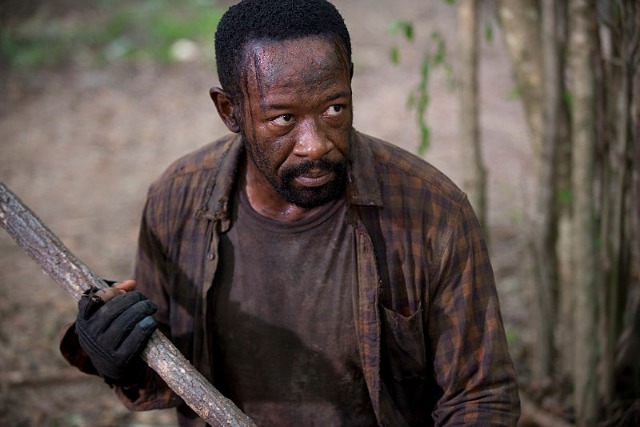 Be sure to check out my other recaps of this season of The Walking Dead!

Spoilers ahead! Read on at your own risk!

Morgan has gone on quite the fascinating journey. When we first met him, we saw him trying to survive with his son, and then we saw him going mad in the episode “Clear,” and then several episodes later, he was a rehabilitated, pacifist aikido master. It was quite the transformation, and we all had tons of questions surrounding how Morgan went from crazy violent to peaceful. In this week’s 90-minute episode, we got to see exactly what happened to transform him.

The episode was framed in Morgan talking to someone, sharing his story with them. We didn’t figure out who that person was until the last few moments of the episode—we’ll talk about that in a moment. The real meat of the episode came from Morgan’s interaction with a man named Eastman. Morgan stumbles across Eastman’s gorgeous cabin in the woods and ends up being detained by Eastman after Morgan refuses to lower his gun.

Right off the bat, Eastman shows himself to be an interesting man—and not just because he has a jail cell in his living room. For being a man living alone in the woods in the midst of a zombie apocalypse, Eastman is pretty chill. He’s got himself a friendly goat named Tabitha who he is trying to use to make cheese, and he spends his days harvesting plants from his garden. When he encounters a crazed, gun-wielding Morgan creeping around in his yard, instead of killing him, Eastman offers several warnings before knocking Morgan out with his staff and locking him in that living room-jail. Eastman even has sarcastic conversations with Morgan despite the fact that Morgan doesn’t do much beyond screaming “KILL ME!!!!” at him.

Just like Morgan was a godsend for Rick in season one, Eastman was a similar type of “guardian angel” for Morgan. Eastman is incredibly patient, helping Morgan work through his PTSD and offering him a healthier way of living in the midst of the destruction around him. When Morgan explains that he’s still alive only to “clear”—basically kill every single thing he encounters—Eastman insists that all life has value, and that there is a way out of the depths of despair he’s found himself. Slowly but surely, Eastman is able to pull Morgan out of his shell. He protects Eastman’s goat, Eastman begins to train Morgan in aikido, and eventually Morgan is able to level up enough to unlock Eastman’s tragic backstory.

We learn that Eastman’s family was killed by a criminal he worked with as a forensic psychologist, and that Eastman ultimately took the man back to his cabin in the woods, locked him in the jail cell he fashioned in his living room for the man, and let him starve to death. After the man’s death, Eastman was horrified to find that he didn’t feel justice, vindication, or even a bit better after driving his family’s murderer to his death. Because of this, he went to Atlanta to turn himself in—and that’s when he found out that the apocalypse had broken out. It was at that point that Eastman adopted his new outlook on life: all life is precious. It’s a horrifying thing, learning that the kind and gentle Eastman once starved a man to death in his living room, but his journey from broken torturer to peaceful farmer is a weirdly inspiring one—at least it’s inspiring in the messed up world of The Walking Dead. It offered hope and a much-needed glimmer of redemption and goodness in the show, showing us a man who was just living his best life with a positive outlook, decidely avoiding territory wars with eye-patched Governors. Seeing Eastman’s redemptive journey clearly gave Morgan a reason to live for something other than killing and basic survival.

So the two become friends, and let me say that Morgan and Eastman are the best pair. Seriously, I’d love an odd couple type show with the two of them. They spar together, farm together, and take care of the lovely Tabitha the Goat together. It’s lovely and shiny.

So obviously it totally doesn’t last.

On a supply run gone wrong to one of Morgan’s old haunts, the walker of a man Morgan choked to death at the top of the episode comes back on the scene. Eastman lets Morgan take care of the walker, but once Morgan recognizes who the walker was, he immediately freezes. Suddenly, Eastman forgets all of his aikido, pushes Morgan out of the way of the walker, and blocks the walker’s attack with his back and gets bitten. If that wasn’t enough, when Morgan and Eastman return to the cabin, we find that Tabitha the Goat has been eaten by a walker. Essentially, all of the hopeful, good things Morgan found in the cabin are dead—or about to die.

Though Eastman tells Morgan that he can continue living in the cabin after he’s gone, Morgan leaves after Eastman shoots himself. He comes across a walker that he promptly puts down, protecting a couple that would have surely been bitten had Morgan not come along. The woman offers him a cup of chicken noodle soup and a bullet, thanks him, and then leaves—and Morgan lets them, leaving himself to follow the signs towards Terminus. Knowing where Morgan’s story picks up from that moment, it gave viewers a feeling that, though Morgan has been through Hell and tragically lost his newest friend, he found a purpose and a healthier outlook on life.

Then we see who was listening to Morgan’s redemption story: It was the Wolf Morgan hit at the end of the second episode of this season. Morgan is trying to convince the Wolf that he can live a good life without mindlessly killing everyone. Unfortunately, the Wolf isn’t buying it. The Wolf reveals an injury on his side, and says that if he doesn’t ending up dying he will kill every single person in Alexandria—that he has to kill them all. Morgan responds by breaking his code for the good of the community, and kills the Wolf.

Just kidding. He lets the Wolf continue to live, and locks him in a room in Alexandria, worrying the entire Walking Dead fandom.

I get Morgan’s code; I really do. However, Morgan must realize that the attack on Alexandria was partially his fault, since he let those Wolves live. If Morgan lets this Wolf live, it’s inevitable that there will be an even larger loss of life in the tiny town. I find myself really conflicted over this. I appreciate Morgan’s value on all life. In an age where the dead are literally walking, valuing the life around you is more important than ever. However, by letting Wolves live, including this one, he’s valuing that one life over the dozens of Alexandrians that have been or will be killed.

Sure, Morgan isn’t directly killing those Alexandrians, but the consequence of letting villains live is causing people to die. It’s easier for you and me to have a moral code that forbids us to kill other people. However, in a world where the undead are trying to kill you, and living humans are trying to kill you, there is a bit of a grey area in such a strict moral code. Is Morgan really valuing all life when he’s letting murderers loose to kill his friends? Is he really living a better life than his “clear” days by watching carnage around him and letting the perpetrators escape? Is choosing the life of a villain over the lives of your friends and family just as evil as killing someone? They are all big questions that Morgan is going to have to do a lot of work to unravel, especially as the aftermath of the attack on Alexandria unwinds.

While I love Morgan and I loved getting to see how his character went from “clear” to “all life has value,” I was really annoyed at the timing. Like I said, I love Morgan, so I want to see his backstory. However, last week’s episode ended with Glenn potentially dying (we’re still not sure what happened to him), and Rick being stuck in an RV that’s surrounded by a walker herd. That was a crazy cliffhanger they left us on, and for them to not only avoid addressing those situations completely, but to give us a slower-paced, character- and story-driven episode instead was kind of maddening. The episode was great, don’t get me wrong, but the timing made it really hard for me to enjoy it because all I could think of was, “WHAT HAPPENED TO GLENN?!?!?!?!”

It looks like we might get to see what happened to Glenn and Rick next week, but who knows. The episode looks like it largely takes place in Alexandria, so it’s possible that the powers that be over at The Walking Dead will make us wait yet another week to find out what happened to our boys. I hope I’m wrong about that, though.

What did you think of this week’s episode? Did you like the shift from the high-octane story telling and cliffhanger ending to a more story-driven episode? What did you think of Morgan’s back story? Do you think he has more blood on his hands by letting Wolves live than he would had he just killed them? Let me know that and any other thoughts on the episode in the comments!