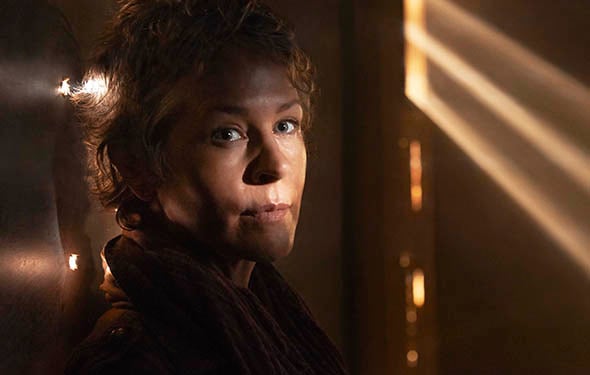 If you aren’t caught up on The Walking Dead, read ahead at your own risk. There will be spoilers!

I’ve been dubious of Alexandria since Sasha and Maggie first met Aaron out in that field. It’s too perfect. The people are too nice. They have all managed to remain too safe in the midst of a giant tragedy. I mean, even Woodbury residents had to deal with walkers tearing down their walls and overrunning their camp before they were able to set up their idyllic little town. But in Alexandria it seems as though people made a beeline for that area once the dead began to walk, and they have been able to chill out in Alexandria and essentially wait for the whole thing to blow over, Shaun of the Dead-style.

It just seems like a giant red flag to me, and it seems like some of the members of our group felt that way as well. Though everyone was happy to finally have a home, after meeting people like the Governor or running into other “safe zones” like Terminus, the group has some trust issues. Because of this, Rick, Daryl, and Carol decided to make a few preparations by hatching a plan to steal a few handguns from the Alexandria weapons room, and keep them close just in case.

Carol decides she can do the deed of stealing the guns, as her new, Alexandria-assumed role of “people person” and “den mother”–can we just take a moment to revel in the awesome hilarity of that moment when a male Alexandria resident offers to teach Carol to shoot–has made her essentially invisible to the other residents of Alexandria. With Deanna planning a welcoming party for Rick and his group, Carol decides that the best time to swipe the guns would be in the middle of the party. So Carol bakes up a batch of her famous applesauce cookies, pops on her smartest sweater, and goes to make an appearance at the party. More on her in a bit…

Rick is still trying to decide how he feels about Alexandria, and he’s starting to get a bit sketchy morally. I mean, this show has always blurred the lines between right and wrong, but lately Rick has been super flippant about doing things that are pretty straight-up wrong. For instance, his flippant remark that the group could just take Alexandria if things with Deanna don’t work out, or how he’s starting to move in on Jessie–a woman who is, for all he knows, happily married–and then reaching for his gun when he sees Jessie with her husband. I’ll be honest; I’m a bit worried about Rick.

Questionable moral compass aside, I get the feeling that Rick likes being a cop again, and he especially likes that Carl and Judith are finally in a safe place that allows them to be kids. So while he’s still preparing for the moment when Alexandria goes belly-up, I think he’s happy to give his kids a bit of a normal life, if only for a while.

Daryl still didn’t appear to have showered, and he continued acting like an angry outcast for most of the episode. That is, until Aaron happened upon him while Daryl was hunting and Aaron was (allegedly) rabbit hunting. The two stumbled across a wild horse, named Buttons, and try to capture it to bring it back to Alexandria. As Daryl is just about to lasso the horse, a herd of walkers breaks up the moment. Daryl and Aaron have a bit of a bro-ment killing walkers together, and then they race off to find Buttons. Buttons, of course, is brutally killed at the hands of the walkers, because this is The Walking Dead and we cannot have nice things ever.

The pointless killing of yet another horse of The Walking Dead aside, Daryl really warms to Aaron. He even dresses up and attempts to attend Deanna’s welcome party at Aaron’s suggestion. Of course, Daryl doesn’t make it in, and instead stops by Aaron and Eric’s house for some “serious spaghetti”. Aaron offers Daryl a job as co-recruiter to take Eric’s place, and a motorcycle with a garage full of spare parts to fix it up. Aaron says that Daryl can tell a good person from a bad one, and he understands that Daryl needs time outside of the walls. Daryl is touched, and accepts the job.

Even more telling of Daryl’s begrudging acceptance of Alexandria comes when Carol distributes her stolen guns. Daryl refuses a gun, saying he’s going to really try to make Alexandria work. He isn’t the only one to turn away from a once-trusted weapon. Michonne dons her constable uniform, and realizes that she needs to put her katana aside. Mercifully, she doesn’t get rid of it or destroy it, but she does symbolically hang it on her wall. We also see Glenn and Maggie take Noah under their wing at the welcome party, reminding Noah that he is with family now, and Carl even hangs out and goofs off with some of the other Alexandria teenagers. It seems like, for the most part, the group is starting to assimilate into Alexandria. While the group is still a bit wary, I think they are beginning to settle in…

…And then we have Carol.

Sure, Carol took on the role of the weak “den mother”, but she is the definition of a wolf in sheep’s clothing. Maybe she has a sweet smile and a killer recipe for cookies, but she’s not a safe person for the citizens of Alexandria. She repeatedly warns Rick that assimilating into Alexandria culture will make them weak, and she even spearheads the plan to steal guns. She might be doing what she has to in order to be a part of Alexandria, but she is doing everything she can to stay frosty.

As she is in the middle of taking guns from the Alexandria lockup, she is interrupted by Jessie’s son, Sam. Understandably concerned Sam will tell his mother that he found Carol stealing guns, Carol proceeds to go Rambo Carol all over the kid, saying he could either accept her bribe of a lifetime supply of her tasty cookies, or she would steal him from his bed in the night and tie him to a tree in the wilderness where the walkers would eat him alive. Understandably, the kid goes for the free cookie option, and leaves the lockup scarred for life.

At least she didn’t tell him to look at the flowers, right?

Honestly, this episode left me perplexed. I don’t trust Deanna and her utopian Alexandria. I want to, but I don’t. I really want the group to find a new home, and I think Alexandria would be a great home. However, I’m just waiting for the other shoe to drop where we find out Deanna is some kind of Governor-esque crazy lady, that the group harbors crazy cannibals, or something far worse.

However, more troubling than my distrust of Alexandria is my growing distrust for some of the group’s core members. I’m really worried about Rick, and I fear he is beginning to morph a bit into a bad guy. Thinking about how the Governor rose to power, which started from an honest desire to keep his people safe, makes me worried about this road Rick is headed down.

Additionally, Carol is concerning me. I get why she had to threaten Sam, but I feel like she’s being a bit too flippant with her role as the invisible woman. She’s definitely not all in with the Alexandrians, and I’m concerned that since she’s partnering with Rick by having one foot out the door, I feel like it will only take a gentle nudge to turn those two into barbarous killers. I love that our group is very capable of taking care of themselves, and I get that they have had to adjust their morality to adapt with the times. However, I’ve never thought of them as “bad guys,” and it concerns me that they are beginning to take on an antagonistic role within Alexandria.

With only three more episodes this season, things will certainly come to a head very soon, and we should start to get some definite answers on Alexandria being good or bad for the group—or if the group is good or bad for Alexandria.

What did you think of the episode? How do you feel about Rick and Carol’s actions? Do you think they are turning into baddies, or are they just being smart and protecting themselves? Let me know in the comments!