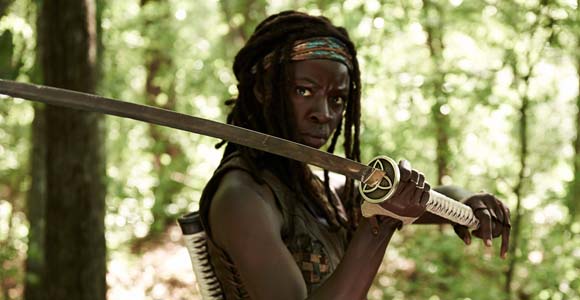 In an interview with Entertainment Weekly, Gurira spoke about the rough times Michonne has experienced in Season 4. [Spoilers]

She really cared about [the prison]. She really wanted to prevent what she knew the Governor was capable of. She didn’t see any hope in his transformation or redemption. The idea that this actually happened just as she was letting her guard down. You know she says to Daryl in episode 404, “I’m not going to go out and look for him anymore.” So the trail did get cold and she starts to will herself more to just being there, and not like man-caving on her horse anymore. She does that little trip with Hershel and starts to literally help more with the housekeeping of the prison. So to get to the point where all that is lost is severely traumatic for her. What happens to Hershel right next to her, in her presence, something that she couldn’t prevent, that for her is extremely traumatic. You know she likes to take care of business. She had just started to slip into being a member of the community and plugging in and that is huge for her. It’s revolutionary for her. So the loss is pretty extreme. So the question is, how does she metabolize this? How does she handle it?

“Man-caving on her horse” is going to be my new phrase whenever I want people to leave me alone.

So will the events of the midseason finale give Michonne new purpose or have her pulling back from the now-splintered group? Gurira seems to think it could go either way.

What’s interesting for Michonne is that she is on the tip of something. She was on the tip of something in those first eight episodes. Was she going to settle in? Was she starting to open up? Then the trauma hit and I think the big question is, will this clam her back up or open her up? It’s a question of going back to the old her or going on a different path. That’s the question sitting on her soul as she tries to metabolize the trauma that’s befallen her.

Meanwhile, according to TV Guide, [Spoiler for character return] we still have not seen the last of The Governor. [Insert obligatory “I’m glad I stopped watching” here.] But no exact word on what that means.