Review: Persepolis‘ Marjane Satrapi Goes to One Hell of a Dark Place With The Voices 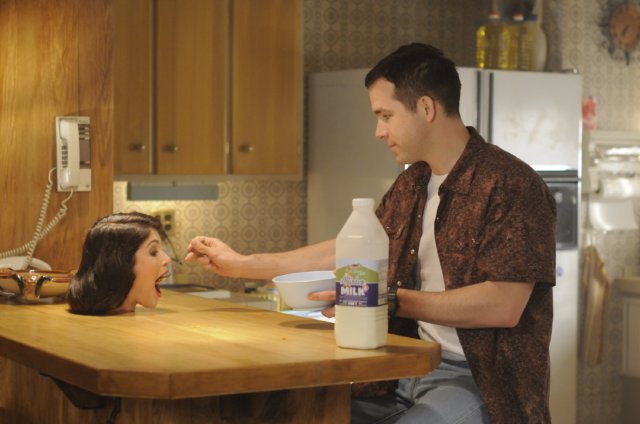 The Voices is the third movie from Persepolis creator (of the graphic novel) and co-director (of the movie) Marjane Satrapi. Both Persepolis and her follow-up, 2011’s Chicken with Plums, have biographical elements, with Persepolis being about Satrapi’s childhood and young adulthood in Iran, and Chicken with Plums focusing on her great-uncle, a famous violinist. The Voices is… not so much with the autobiographical elements, unless Satrapi is secretly a serial killer. It’s also the first of Satrapi’s films that she didn’t write–instead, the scribe is Michael R. Perry, whose credits include Paranormal Activity 2 and TV shows “Stephen King’s Dead Zone” and “The River.”

In The Voices, Ryan Reynolds plays Jerry, an emotionally disturbed yet chipper young man who lives alone with his cat and dog, who talk to him. Or he thinks they do–in fact, the folksy tones of his dog Bosco and evil Irish snark of his cat Mr. Whiskers (both voiced by Reynolds) are a result of mental illness, inherited from his mother, who thought she communicated with “angels.” Jerry is fixated on the fiery Fiona (Gemma Arterton), his British bombshell coworker, who sees him only as the office weirdo. Fiona’s shy friend Lisa (Anna Kendrick), however, is charmed by Jerry’s sweet, aw-shucks persona and senses hidden depths that she wants to explore.

In real life, one imagines that all the world’s Lisas would realize that they should stay far, far away from Jerry, because yeah, OK, on the surface he’s nice–he’s the archetypal “nice guy”–but he’s also clearly neurotic, clingy, and obsessed, somehow unwilling or unable to register the fact that Fiona is clearly not into him. The dude has problems. Eventually Jerry accidentally (or “accidentally”–Mr. Whiskers says he subconsciously wanted to do it) kills Fiona and makes friends with her decapitated head–which isn’t a spoiler, by the by. It’s in the trailers. In the real world, the cops would instantly peg the creepy coworker who was obsessed with Fiona as the culprit and would be knocking on Jerry’s door for questioning within hours. The Voices doesn’t take place in the real world. Nor does it want to–it’s fantastical, it’s surreal, it’s heavily stylized. It’s a comedy, but it is (pardon my language) dark as fuck. There were times when Satrapi and Perry took things so far out-there that I was unable to suspend my disbelief (seriously, people, call the cops), but on the whole I bought into its blood-soaked cotton candy world.

And it is very blood-soaked–the major conflict for Jerry, as the movie progresses, is whether to commit to being a killer (like his cat wants) or be the “good boy” his dog knows he can be. Meanwhile, his therapist (Jackie Weaver, excellent as always) tries to get him to take his medication, but he’s terrified that if the voices go away, he’ll be alone.

Visually, the film’s amazing, blending the everyday with more fantastical elements in a small-town, blue collar version of the fairy tale Iranian landscape in Chicken with Plums. It’s kind of like a grubby, twisted Amélie. Jerry’s apartment is attached to a neon-festooned abandoned bowling alley for some reason. A soda fountain-esque dance number, with Jerry’s victims as back-up dancers, takes place over the end credits. And the moments that show us how Jerry’s apartment actually looks, compared to how he (and we) see it, are absolutely chilling.

This movie isn’t for everyone. If you’re not OK with blood ‘n’ guts, maybe stay home. If a comedy about a serial killer isn’t your cup of tea, maybe stay home. If you’re sensitive towards the portrayal of mental illness or violence* against women in film (Jerry clearly has some Issues with women, relating to his relationship with his mother, and though they manifest throughout the film, they’re never directly addressed)… you know the drill. If you do want to see it, it hits theaters in limited release, plus VOD, this Friday.

*The violence is non-sexual in nature, just so you know.