The Umbrella Academy Is Coming to Netflix, and I Can’t Wait For This Glorious Weirdness and These Female Characters 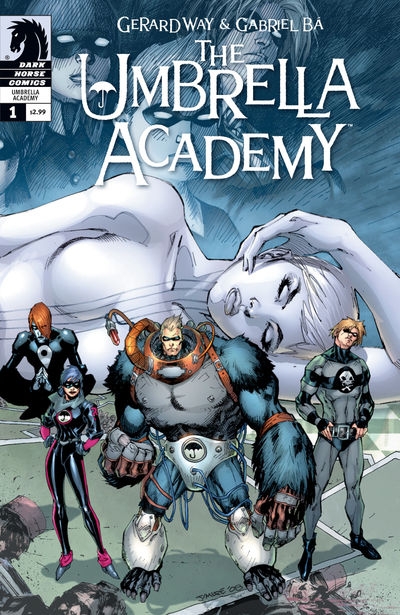 You might know Gerard Way as a musician dude, but I will always think of him as a comic book guy. Before he was put in charge of the DC imprint DC Young Animal, he was writing wonderfully creative and off-the-wall comics for Dark Horse like The True Lives of the Fabulous Killjoys and the always amazing The Umbrella Academy, which is one of my all-time faves. Netflix, who has really leaned into doing weird stuff well, is now adapting Umbrella Academy for TV. Rejoice!

For those who don’t know, The Umbrella Academy is a series of comics in which each chapter of the story is told in a limited series. Published by Dark Horse Comics, and written by Way with gorgeous art by Gabriel Bá, it’s a unique take on the superhero genre. [SPOILERS about the series below if you care and would rather read the comics first]

After the final blow in a cosmic boxing match, 43 superpowered babies are born to random, unconnected mothers around the world who hadn’t shown signs of pregnancy until the moment the babies are born. Yeesh. Seven of the infants survive, and an alien disguised as a wealthy entrepreneur and scientist who goes by Sir Reginald Hargreeves, A.K.A. The Monocle, adopts them all, raising them to be a super team. Oh, and did I mention that this all takes place in an alternate 1970s where John F. Kennedy was never assassinated?

Told you it was weird.

After the first two stories, Apocalypse Suite and Dallas, fans of the series have been waiting for the next installment of the series, Hotel Oblivion, which was announced back in 2009 but has yet to see the light of day. Way and Ba were reportedly still working on it as of 2015, but since Way has been working on musical projects and an increased comics responsibility over at DC, and Ba has continued working on other projects with his brother, Fabio Moon, who knows when Hotel Oblivion will be ready for us.

Thankfully, Umbrella Academy fans now have a live-action Netflix series to look forward to! Way will be serving as a co-Executive Producer alongside showrunner Steve Blackman (Fargo, Altered Carbon), Bluegrass Television, and Mike Richardson and Keith Goldberg from Dark Horse Entertainment. The pilot script was written by Jeremy Slater (The Exorcist).

Way sees Netflix as the perfect home for his oddball superhero yarn. “I am thrilled that The Umbrella Academy has found a home at Netflix,” he says. “I couldn’t think of a better place for the vision Gabriel Bá and myself had when creating the comic, and cannot wait for people to experience that world as a live action show.”

Cindy Holland, Vice President, Original Content for Netflix had this to say about the adaptation: “What drew us to The Umbrella Academy is that it’s wholly unique, visual and stylized. These aren’t the usual superheroes, and this series will embrace the singular tone of the graphic novels — dark yet humorous, supernatural yet grounded in reality. We’re excited to see this world and introduce these unforgettable heroes to Netflix members around the globe.”

And I, for one, am excited to see it. However, I really hope that they get a decent number of women in that writer’s room. Part of what I love about The Umbrella Academy are its unique female characters: Allison Hargreeves, A.K.A. #00.03 The Rumor, who can alter reality by telling lies; and Vanya Hargreeves, A.K.A. #00.07 The White Violin, who could basically destroy the world with a single note played on her violin.

Both these characters embody things about being a woman that would be worth exploring in a nuanced way through genre. The Rumor’s entire premise is that her power comes from telling lies. In a world tarnished by rape culture and a society that inherently doesn’t trust the word of women, a female character whose power is in lying and who, in the comics, is brutally silenced when she survives having her throat slashed in Apocalypse Suite (by her adoptive sister, no less!), which severs her vocal chords and takes away her power.

This happens while trying to stop that sister, The White Violin who, when she was a child was told she had no powers. Turns out, they were being suppressed by The Monacle, because he knew that she was the most powerful of them all. The Conductor, leader of the Orchestra Verdammten, released her powers, which drove her mad, and turned her into a villain with the ability to release destructive waves of force using her violin that can be strong enough to cut someone’s throat or destroy an entire building with a single note.

There are so many amazing things about women and power that could be explored through these two powerful sisters who were set against each other, but end up finding their way back to each other. I just hope they have the sense to balance the writer’s room well enough to allow for those things to come out in the scripts in a nuanced way.

What do you think? Are you excited for a live-action Umbrella Academy? Who are you most looking forward to seeing come to life on the small screen? Tell us below!