The Truth About Saint Patrick, Snakes, Pagans, and More

The Truth About Saint Patrick, Snakes, Pagans, and More 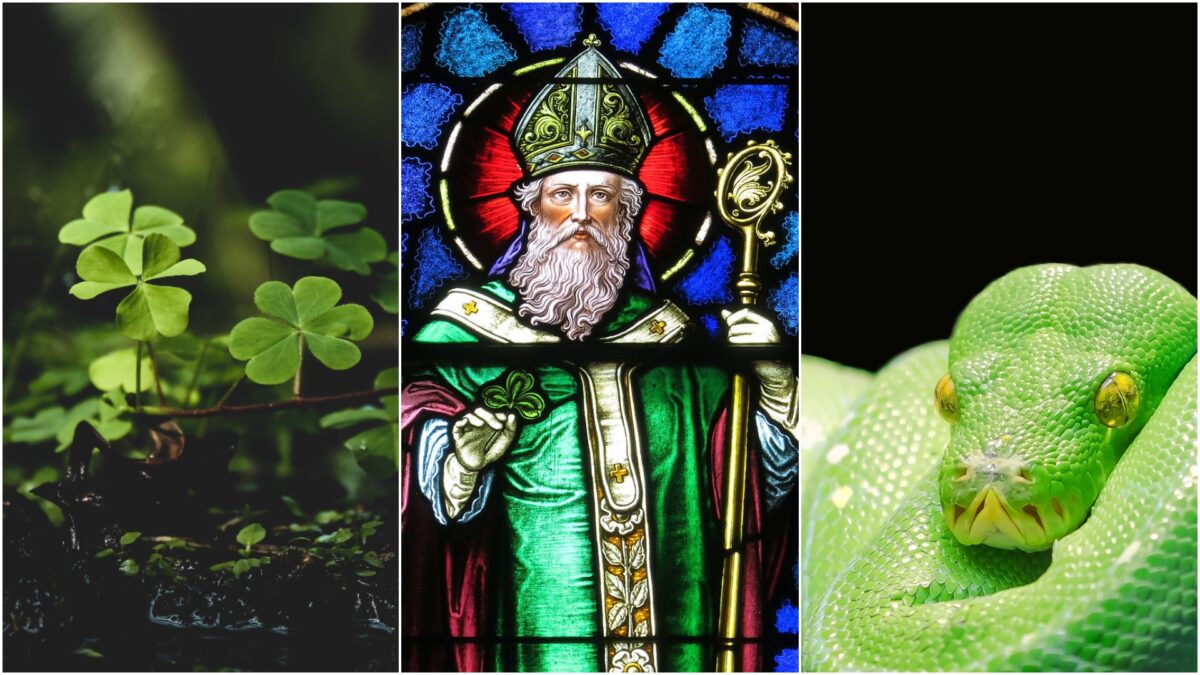 The story of Saint Patrick’s Day is really a story about stories themselves, how they change and evolve, and how one story or figure can become something different for different generations and eras. Today we mark St. Patrick’s Day as a celebration of Irish history and heritage, and yes, for a lot of folks that just means an excuse to have a drink or two (please, go with Guinness and not disgusting green beer) and wear a fun hat, but the real history of Saint Patrick and the evolution of the holiday is a fascinating tale.

The story of Saint Patrick is one of myths layered on myths. The best-known story of Saint Patrick is that he became the patron saint of the Emerald Isle because he “drove all the snakes from Ireland.” That’s a curious claim given that there never were snakes in Ireland (or at least, there are none in the fossil record). So what gives? The common belief is that in this story the “snakes” represent pagans or Druids that Patrick banished from the island, given that he is credited as a missionary who brought Christianity to Ireland. But … that might also be a myth, too.

That’s the thing about folklore and history: It’s very hard to tell them apart when we’re talking about a man who may (or may not!) have lived over 1500 years ago. From what we know, the real St. Patrick was born in Wales or Britain (meaning he wasn’t Irish) around 390 CE. This was at a time when Rome was in control of Britain, but their power was waning and would soon collapse entirely. His name was Maewyn, and he was (according to his autobiographical confession from later in life) captured in an Irish raid as a teen and spent six years enslaved in Ireland before escaping and becoming a man of the cloth.

Because he knew the Irish language and customs from his time there, Patrick returned to Ireland as a missionary and Bishop to spread Christianity, and that’s what he’s remembered for to this day, but there is a lot of apocryphal folklore about him, like his putting shamrocks in pints of ale, and the snake/pagan thing and other various stories of him burning Druid books (which would never have happened because Druids didn’t have books), or converting and chasing away pagans.

But again, there’s no actual evidence for any this … mainly because our records of all European history of this era are extremely sketchy given the whole “Rome collapsing and precipitating the dark ages” stuff going on in the fifth century. Remember the dark ages in Europe aren’t dark because of their events, but because it’s a period we lack primary sources for. We have his own writings, and that’s … pretty much it. The rest is just fun stories—like the snake thing, which didn’t show up in any records until centuries later when the church was still trying to deal with pagans.

In fact, there’s evidence that Patrick wasn’t the first Christian in Ireland, and more importantly, he didn’t eliminate paganism … like, at all. Yes, Christianity slowly became the dominant religion in Ireland, but that was a matter of slow conversion, not conquest and driving druids away. But pagan myths, beliefs, and customs didn’t go away, they were simply absorbed into the Christian structure and local lore. Gods became fairies like the Tuath De Danaan, or heroes like Fionn Mac Cumhaill, or even saints like Brigid. Paganism in Ireland still exists.

Another popular story of Saint Patrick is that he used the Shamrock (a.k.a. the three-leafed clover) to explain the concept of the trinity to the Irish, but again, in the records attributed to him, there’s no mention of that, and the first mention of the shamrock in conjunction with Patrick is from 1517, over 1,000 years after his supposed death around 460. Patrick is just one of those figures who has been written about in so many ways and by so many people, that his story is almost impossible to truly know.

What we do know is that he was seen as the patron Saint of Ireland, and his feast day was celebrated on March 17th. But it was a sedate celebration marked by contemplation and prayer, maybe a ball here or there. Like so many cultural touchstones, Saint Patrick’s Day didn’t really become a thing until it reached America.

To understand why we have Saint Patrick’s Day, it’s more important to understand the history of the Irish diaspora in America than perhaps anything else. Huge numbers of Irish immigrants came to America in the 19th century, fleeing famine and oppression under English rule, but even in the U.S., they faced discrimination and prejudice. So Saint Patrick’s Day became a vehicle to express pride in Irish heritage, especially in cities with large Irish populations.

There’s so much more to every story than what we assume, and even beneath that, there are layers and mysteries that never end. When we look at a holiday or a piece of folklore or a saint, we’re only ever getting, shall we say, one leaf of a clover that’s part of an entire organism with roots running deeper than you ever might imagine. (Yes, I have lots of clover growing in my lawn right now that’s very hard to weed out. Why do you ask?) So when you raise a pint today, take some time to think about the history that brought you to that moment. Because that’s the real luck.