If you’re unfamiliar with Supernatural, here’s a quick rundown. The show is about 2 brothers whose mother is killed by a demon when they’re just kids, launching their father into a manhunt of finding the beast that killed his wife and, in turn, learning all things supernatural. (Get it? It’s the name of the show!) He, of course, teaches these new skills to his sons, who inherit his lifestyle. It doesn’t take long for one brother (Sam) to run off and try to have a normal life, only to be brought right back into the “family business” by a tragic event of his own—mere hours after his brother has just turned up on his front porch. And that’s just the first episode!

Supernatural has been scoffed at by people over the years, and criticized for frequent fridging of its female characters, but after 11 seasons of being on the air, you tend to think, “Why is this show still even on, and who are these fans?” It’s more complex than a lot of people understand. 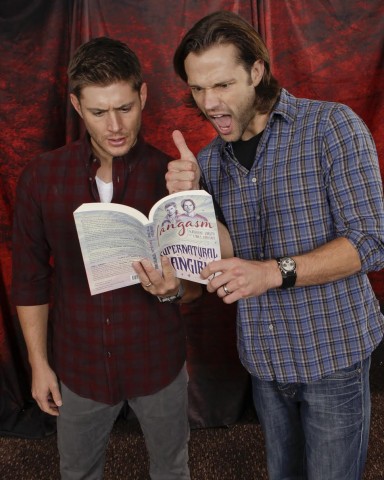 I got the honor to sit down and talk to Lynn Zubernis and Kathy Larsen, authors of Fangasm: Supernatural Fangirls. These women are also respected professors, who were excited to talk all things Supernatural and break down their thoughts on fandom and the woman characters portrayed in the show.

It took mere seconds to jump immediately into talking about the newest season and what our thoughts were so far. We ranted and raved about how the storyline is amazing and the episode “Baby” was mind-blowing!

We also quickly discussed the show’s amazing longevity, and Lynn expressed how much “free time” she’ll have when the show’s over, because she dedicates so much of her life to it. After discussing our thoughts and fan theories, we already felt like good friends, and it was time to dive into the hard-hitting questions.

Stacie Sells (TMS): I feel like everyone has an interesting story with how they got into this show, so, what was your first experience with the Winchester brothers and when did you get hooked?

[They both mention a mutual friend that pushed the show on them and even bought them VHS tapes (yes…VHS tapes) to semi-force them to watch, not only because it meant that much to her to share it with them, but she figured it was a show they would be interested in.]

Kathy Larsen: The “Home” episode really got me and was where the show became more about family and that’s what really hooked me. After that I didn’t really have to be pushed to watch it.

Lynn Zubernis: I watched casually for our friend but it wasn’t until Season 2 that caught my attention. I remember I was grading papers with my daughter when I turned to her and said “this is such a great show” and my daughter looked at me confused and said “you’ve been watching this show for a year, and suddenly you love it?”

Even though this show may take a moment to really pull you in, once you’re there, it’s hard to get out. You start to see this relationship build with the brothers and start to feel for them as you see more complex situations arise.

TMS: It’s a complicated question and one that’s mentioned a lot, but why do you think Supernatural has such a strong fangirl/woman following when it’s mainly focused around two male characters? It has to be more than pretty faces.

Zubernis: A lot of people say that, but there’s something about these characters that really grabs them and grabs women … the Winchesters were written as outsiders and people who always fly under the radar and do things that are under-appreciated.

Larsen: That’s what women do all the time, is take care of other people and act selfless, and why women can relate to it.

Zubernis: Eric Kripke (the creator of the show) made them brothers, and even though they’re macho men/have that American masculinity, since they’re brothers, they can show emotion and affection and it’s ok. I think we like to see that emotion.

Larsen: It’s also how they’ve built the relationship and we see how they grow over time and, in some ways, this sounds like criticism, but it’s like people’s relationships to Soap Operas.

Zubernis: There’s actual research that people have a similar biophysical response to watching TV with their favorite characters in the same way they do as being in the same room with their family. It’s fascinating but not surprising.

Larsen: You know them, in a way, even better then people you are close to, because you’re on the inside with these characters, which you don’t have with the day-to-day people you have relationships with.

TMS: There’s been a lot of pushback with Supernatural of being unfriendly to women characters and how they are usually underrepresented, though most of Sam and Dean’s (and their father’s) catalyst to becoming hunters stemmed around women. What are your thoughts on this?

Zubernis: I think quite a few women who watch the show identify as feminist, so that’s an ongoing conversation. When Sera Gamble came onto the show (Season 6) she told us that from the beginning they wrote fascinating characters, other than Sam and Dean, and we were able to see how the brothers respond to them. Many of these characters were women and intentionally written to be an influence on them.

Larsen: Though, they [woman characters] all died at the beginning. It’s said that having the women characters always dying says something about the attitudes toward women, but each woman dying was never a throw away character. They all meant something and, most of the time, would further a plot line.

Zubernis: They made an impact along with their deaths. They wouldn’t be Sam and Dean with out having lost their mother. From a practical standpoint, they needed to have problematic/complicated relationships and a longing for that normal life, because it brought this sadness that they can never have it, making them tragic heroes, which makes us love them even more.

TMS: Being a woman and a fan of the show we tend to latch onto the women characters they DO create. Who are some of your favorite characters that you, personally, can relates to?

Larsen: Sheriff Jody. I love her character arc and can feel for her for all that she’s been through. Her combination of strength and vulnerability, holding it together but barely able to do it is great and relatable.

Zubernis: I also identify with both Charlie and Sheriff Donna and relate to each for similar and different reasons. Charlie is easy to relate to, being an outsider who’s been through trauma while covering it up with “Walking on Sunshine.” Even though under all that pain she has this fortitude that reminds me of me. She’s a geek and has taken shit for it, but it’s made her a stronger person. I also really appreciate Sheriff Donna and love Briana Buckmaster (the actor who plays her). Her character is brilliantly written and represents the “everyday” woman, where Charlie, represents the passionate Fangirl. Sheriff Donna shows the vulnerable side of being unsure and insecure of herself and the struggle to connect with other people, which many women have gone through.

Larsen: She’s also not a size 0 and is grappling with that, too.

Zubernis: As we talk on why we relate to these characters you see how they are capable of writing nuanced female characters and the resilience of them, the journey they’ve been on and where they go. We are able to see it in all of these women characters, which is a pretty extraordinary thing!

[As we continued to talk, we went on about writers of the show, other characters, and tonal shifts. We probably could have gabbed on for hours but needed to go to our jobs. Before we ended the conversation, I wanted to get their take on the power of the Supernatural community. There’s an instant bond when you are able to share this common excitement and language that makes you feel instantly at home.]

Zubernis: There is a strong online Supernatural Fandom community of women that are not only making strong, life changing relationships with each other, but they are able to find support and confidence to be themselves. The show has had conventions for almost a decade, which allowed people to form face-to-face relationships, extending this community not only to the fans but also the actors themselves. No show has had that many conventions. Not even Star Trek can compete with that number.

Lynn Zubernis has also been helping out on other projects, such as Squee! The Fangirl Documentary.

She also has another book on Supernatural and fandom in the works called Family Don’t End With Blood: How a Television Show Changed Lives.