“Keep Moving Forward”: What the Rocky Franchise Has Taught Me About Resilience and Living With Cancer

"You're gonna eat lightnin' and you're gonna crap thunder!" - And that's just from the chemo and radiation baby! 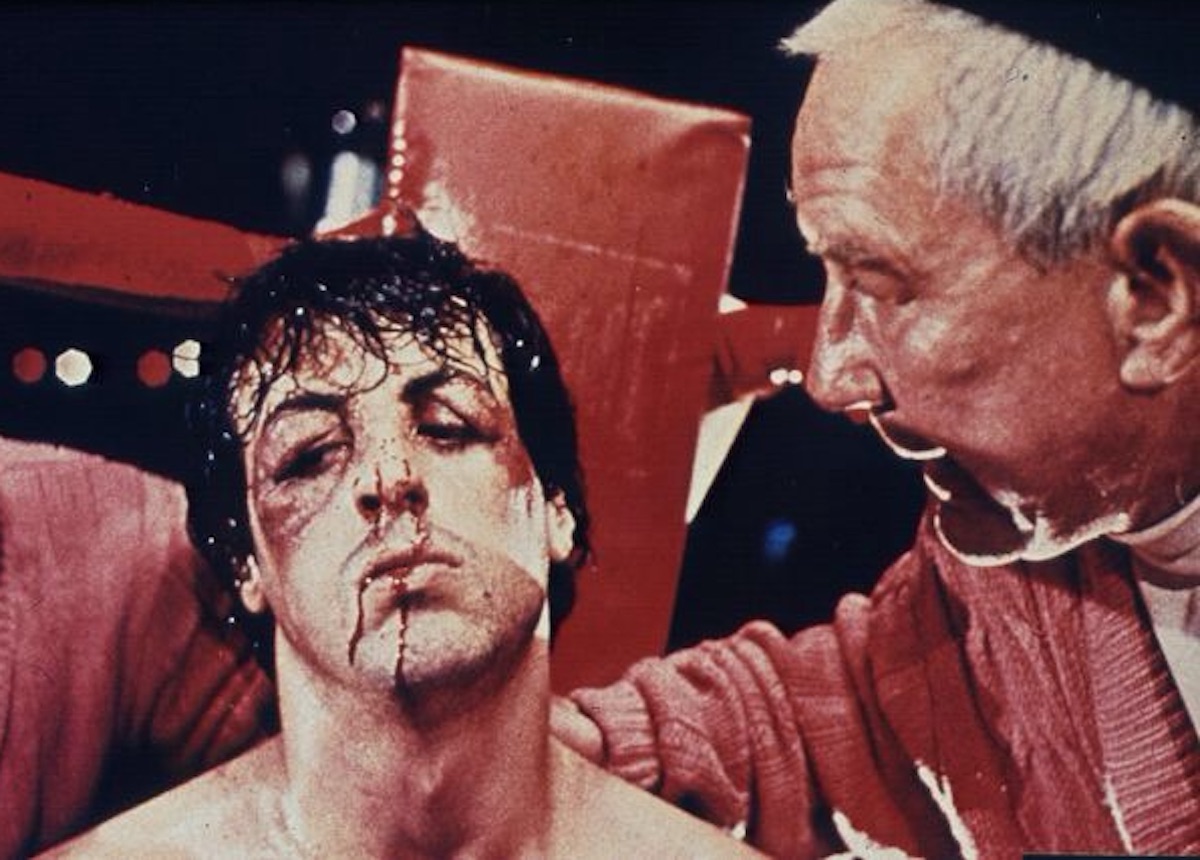 “Because if you’re willing to go through all the battling you got to go through to get where you want to get, who’s got the right to stop you?” – Rocky Balboa

I’ve never been into sports. And I’ve certainly never been into boxing. A too-tall string bean of a child with terrible hand-eye coordination and zero competitive drive, my parents still tried to engage me in various athletic activities: AYSO soccer and softball as a child, track and field as a teenager—but even as a child on the big grassy field I would end every lost match consoling my teammates and reminding them that it was “only a game.”

My coaches hated me. One even shouted back “it’s NOT just a game! You’re supposed to want to win!!” after a particularly crushing defeat. But I was already picking dandelions off the side of the field or sticking my nose back into one of Anne McCaffrey’s Dragonriders of Pern novels.

All of this to say, I’ve never been into sports movies, with the exception of maybe Remember the Titans or the first couple seasons of Friday Night Lights (because who doesn’t love big Tim Riggins right?) And so I never watched Rocky or any of its countless sequels because what do I care about boxing? Or Sylvester Stallone in anything other than Demolition Man? Big beefy men wailing on each other for movie after movie sounded exhausting and a downright trial to sit through.

But then the pandemic hit. And suddenly my world shrunk to the combined rectangles of my bedroom and my boyfriend’s living room and I found myself with nothing but crushing despair, an Italian American who was very insistent that the Rocky movies are good actually as my only companion, and time. So I caved. We clicked play on Rocky and two hours and 2 minutes later I was sitting there bawling my eyes out.

The story of a poor, washed up, Philly boxer who goes the distance against the greatest heavyweight champ in the world walloped my beleaguered soul. I became a woman possessed. My new quarantine mission was to watch every single film in the franchise.

See, I’ve been in treatment for a rare type of non-Hodgkins lymphoma called Mycosis Fungoides (as I’ve written about before) for the past four years, and nothing has demonstrated the understanding of what living with chronic illness is like quite like the Rocky franchise.

“Let me tell you something you already know. The world ain’t all sunshine and rainbows. It is a very mean and nasty place and it will beat you to your knees and keep you there permanently if you let it. You, me, or nobody is gonna hit as hard as life. But it ain’t how hard you hit; it’s about how hard you can get hit, and keep moving forward. How much you can take, and keep moving forward.” – Rocky Balboa

The point of Rocky isn’t to celebrate the victory of the underdog over the champ, it’s about honoring resilience. Rocky heads into his first fight with Apollo Creed knowing that he can’t win, but he does it anyway. He fights round after brutal round to prove that he can go the distance and come out standing on the other side.

When I was first diagnosed back in 2016 after a surgery to remove a tumor the size of an orange from my shoulder, the doctors were confident that my remaining patches were mild. While my form of cancer has no cure (though remission can happen), they felt that three days a week of phototherapy for two years would shrink the remaining bits down enough that I could stay if not fully in remission, close enough to it to lead a fairly normal life.

And so, for two years, I spent every other morning waking up at 5AM so that I could get my phototherapy treatment at the specialty hospital that was an hour away and still make it to work on time. It was a monotonous grind that left my body burned (phototherapy is a form of radiation) and my mind weary. Like Rocky Balboa chasing chickens or running the steps, I kept at it because I was determined to stay standing.

But the phototherapy wasn’t working. So they added a chemotherapy pill to my regimen. Which destroyed my thyroid. So I was put on medication for that too. And when that didn’t work I tried three different clinical trials. All to basically no avail. Because the cancer had become aggressive and began attacking my lymph nodes more directly. Which meant it was time for a more traditional chemotherapy. It caused me to lose 30% of my hair and killed most of the nerve endings in my fingertips, but—much like Rocky vs Clubber Lang in Rocky III—12 rounds of it knocked that cancer out.

Or so I thought. Because much like the Rocky franchise, my battle is never over. There are always new hurdles to leap and punches to take. The hits, as they say, keep on coming. When Rocky flies to Russia to fight Ivan Drago and avenge Apollo Creed’s death in Rocky IV it felt like a strange tonal shift.

It was too campy, too montage-y, too, too much. Where was the simple, lower-class himbo who only wanted to be with Adrian and prove he wasn’t a bum? It’s the Rocky film my fellow millennials love the most because of its silliness, but after two and a half films (because let’s face it, Rocky III is where the tonal shift begins, but bless it for giving us that Apollo Creed and Rocky short shorts training montage) of grit, sweat, and survival, Rocky IV felt like a letdown.

And then this summer, in the middle of the pandemic, a tumor sprouted up on the palm of my dominant hand and was growing exponentially fast—it was literally doubling in size every single day. Over a span of 3 days, my hand went from normal to a claw that I could neither open nor shut to a balloon. I called my doctors and was then rushed to the hospital where I stayed for 4 days of emergency radiation.

The nurses all wore PPE hazmat suits, I spoke to my boyfriend through the hospital room window because no visitors were allowed, and my doctors were having very frank conversations with me about the possibility of amputation because the tumor was cutting off circulation to my fingers. My tumor didn’t shrink, but after four days with no fever, they released me and I was allowed to return for radiation as an outpatient. And then while in the shower, I accidentally bumped the tumor with my shampoo bottle….and it exploded. Like literally a volcano of stuff came pouring out of it like a scene from Dead Alive or The Fly or David Cronenberg’s wet dreams. See, my tumor was liquified by the radiation and had turned into an abscess. Which meant another emergency trip to the hospital, followed by an excruciating and disgusting SQUEEZING of the wound, which was then stuffed full of packing gauze. I spent the following four weeks with my hand in a wound dressing cast and I now have permanent fibrosis and scar tissue that limits my hand’s movements.

It was like Rocky IV!  Too much! Too ridiculous. Too over the top. Too many high stakes and improbable events happening in a short span of time. A tumor blowing up like a balloon? A hospital stay during a pandemic? Possible amputation? A pus explosion straight out of a 1980s horror film? Pick one! It’s just not believable anymore. What’s next, some Russian technology straight out of a James Bond film? Where’s my “Eye of the Tiger” montage, dammit?

But, like Rocky, I still have to. Knowing that I could die. Or lose my hand. Or whatever. When you have a chronic illness, you just keep going.

Which is why I am glad that Rocky hasn’t died yet. I know that dramatically it would have made for better storytelling to have Rocky die at the end of Rocky V, having received one blow to the head too many. But keeping him alive through Rocky Balboa and now the Creed movies, living a humble life, continuing his day to day struggles, and even surviving the loss of Adrian and Paulie, is a symbol of his endurance. Even when he comes close to giving up in Creed when faced with his own cancer diagnosis, he digs deep (with the support of Adonis, Apollo’s son) and finds a way to keep walking up those steps.

And that is what matters to me. Yeah, the franchise might go on too long. Yeah, things might get ridiculous. But it’s like life. It feels endless. The hits keep coming. It’s the same shit on a different day. But as someone with chronic illness, every day is a new day to go the distance. You don’t have to “win” every fight in order to celebrate the fact that you’re still standing. If you made it through, you are resilient. And that is enough. Enduring is enough. So if you’re feeling overwhelmed, defeated, like the world, or Trump, or the virus, or whatever has knocked you down for the count, remember this:

“Get up you son of a bitch! Mickey loves you.”