The Public Acceptance of Evolution in 34 Countries 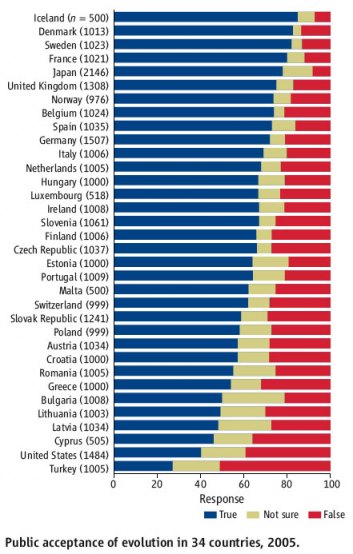 This graph is nothing new — it’s been floating around online since it was published as part of a 2006 study which made its way into Science, which concluded that “The acceptance of evolution is lower in the United States than in Japan or Europe, largely because ofwidespread fundamentalism and the politicization of science in the United States.” Old though it is, it bears some contemplating.

Iceland, which has the highest belief in evolution of those countries polled, sure is a conundrum: “About 10 percent of Icelanders believe in supernatural beings and another 10 percent deny them, but the remaining 80 percent on this windswept North Atlantic outpost either have no opinion or refuse to rule out their existence, a survey shows.”

(via Reddit | Original journal article from which the graph came)