After watching the wonderful weirdness that is Netflix’s The OA, I began to think about the similarities between it and star/creator Brit Marling’s feature film, The Sound of My Voice. The two have several motifs in common. However, and more importantly, they both seem to focus on the importance of believing women about their own experiences. **SPOILERS FOR BOTH THINGS! SO, YOU KNOW, YOU’VE BEEN WARNED**

For those who have yet to see the Netflix show, The OA tells the story of Prairie Johnson (Marling), a formerly blind woman who, after being gone for seven years, returns to her small-town home able to see, and with mysterious markings carved into her back. Her parents are understandably distraught over what their daughter must have been through, and are frustrated by the fact that she refuses to talk about what happened to her in the seven years she was gone.

Meanwhile, there’s a reason why she isn’t talking. While she did suffer a traumatic experience—she and others who’ve had near-death experiences were held against their will by a mad scientist, Dr. Hunter Hap (Jason Isaacs), who is using them to research the afterlife—it isn’t the trauma that is keeping her from speaking. She doesn’t want to share what she’s been through with her parents, or the press, or anyone else who’s asking, because she worries that she won’t be believed and that, thinking she’s mentally ill, her freedom will be restricted. And she needs to be as free as possible for the task she intends to undertake.

Instead, she begins meeting in secret with five people—four teens and one teacher, all outsiders in various ways—to whom she tells her story and whom she has recruited for a secret mission.

Before we get into The OA, lemme get you caught up on 2011’s The Sound of My Voice.

In this film, Marling plays Maggie, a mysterious woman who is leading a cult based around the fact that, after mysteriously waking up in a motel bathtub, ending up on the streets of Los Angeles, and being taken in by a Good Samaritan, she has realized that she is in fact a time-traveler from the year 2054. Hearing about the cult, two documentary filmmakers, the boyfriend/girlfriend team of Peter and Lorna (played by Christopher Denham and Nicole Vicious), go undercover, learn the overly-elaborate secret handshake, and join the cult in order to expose Maggie as a fraud. But is she?

As the story continues, it becomes less and less clear as to whether or not Maggie is telling the truth. For every “hole” Peter and Lorna (or others in the cult) poke in her story, she has a reason or solution, giving answers to questions that are equally as plausible as any doubt expressed. Also unclear? The point of the cult, which is alluded to, but never outright expressed aside from a mention of its followers going to a “special place,” and Maggie saying that she won’t be able to go with them.

When Maggie asks Peter to procure a little girl named Abigail Pritchett (Avery Pohl) from the school where he substitute teaches because that girl is her mother, he agrees to do it (albeit in a way he deems safe for the girl). Meanwhile, Lorna sees this as a sign of how dangerous Maggie is, and wants to pull out of the project entirely and report Maggie to the authorities. They break up over it.

Lorna is eventually approached by Carol (Davenia McFadden), a woman who claims to be with the Justice Department and is doing an investigation on Maggie. Carol tells Lorna that Maggie is wanted for a variety of felonies, and Lorna agrees to set Maggie up to be captured and to hide this plan from Peter.

In the final scene of the film, Peter leads Abigail away from a class field trip to the La Brea Tar Pits to meet with Maggie in secret, and when they meet, Abigail is drawn unafraid to Maggie. Maggie begins the cult’s secret handshake, and Abigail knows it, finishing it along with her. When the girl asks Maggie how she knows her secret handshake, Maggie smiles and says, “Because you taught it to me.”

Yet, before the two can have proper explanations, Carol and some other agents burst in and apprehend Maggie as a shocked Peter tries to take in what just happened. She was telling the truth, the movie seems to be saying, but you didn’t believe her, and now an innocent woman is going to be persecuted.

Both The OA and The Sound of My Voice demonstrate Marling’s (and frequent collaborator, director Zal Batmanglij’s) penchant for using certain motifs. For example, both utilize a series of complex movements as the key to unlocking the story. In The OA, it’s The Movements:

In The Sound of My Voice, it’s The Handshake (which the Internet has failed to provide a gif for, so here are Marling and Batmanglij doing the handshake at WonderCon):

What’s interesting about this is that both of these series of movements are feminine in nature, and are put into the hands of men. The OA gives us a graceful, yet forceful interpretive dance performed by mostly boys, whereas the handshake in The Sound of My Voice is reminiscent of Every Little Girl Hand-Clapping Game Ever, and it too is performed by men, very seriously. Both stories ask the men in them to understand femininity before proceeding, centering the secret world of the feminine as a starting place, and as the thing the audience needs to understand before going into the story more deeply.

Both stories also use songs from the 1990s in intriguing ways. In The Sound of My Voice, a cult member asks Maggie to sing a song “from her time,” and after some hemming and hawing, she agrees…and ends up singing “Dreams” by The Cranberries. When the cult member tells her that the song is one from the 1990s, she is unperturbed when she replies, “It’s possible. In my time, that song was made popular by a singer named Benetton.” She then proceeds to engage with the cult member in a thorough defense of the debunking of her story. This song is used both as a ‘gotcha’ to catch the female protagonist in a lie, and as that protagonist’s method of explaining how what she’s told them is very much true.

Meanwhile, The OA finds its trans male character, Buck (Ian Alexander), singing Pearl Jam’s “Better Man” as part of the school’s glee club, replacing the other male soloist who’d been punched in the throat by Steve. This song is about a woman lying to a man about being happy and not being able to find a man better than the one she’s with. It’s interesting to have a cis boy replaced by a trans boy to sing this song, perhaps as the “better man.” But more than that, it’s a guy singing a song about a woman trapped in a bad relationship (Eddie Vedder wrote the song about “the bastard who married my Momma” and later divorced her). What’s more, she’s lying to protect herself. She lies, not out of malice or inherent dishonesty, but out of self-preservation.

It’s interesting to see these stories through the prism of consent and believing women when they talk about their experiences, as well as the consequences women face when they aren’t believed. The Sound of My Voice seems very clear about its female protagonist and whether or not what she’s saying is true. We are left with the image of her being hauled away for punishment, despite having witnessed a very compelling piece of evidence that warrants at least further investigation into her story, and Peter seems shamed.

The OA, being a series that will be heading into a second season, has more room in which to play with the truth of OA’s story. The ending of the Season One finale was pretty controversial, not the least of which because of the depiction of a shooting at a high school. However, viewers were divided on what actually happened when The OA Five danced for their lives in that pivotal scene, distracting the shooter long enough to allow a cafeteria employee to take him down, and allowing OA to get shot in the process, a five-point crack radiating from around the bullet hole in the window she stands behind. 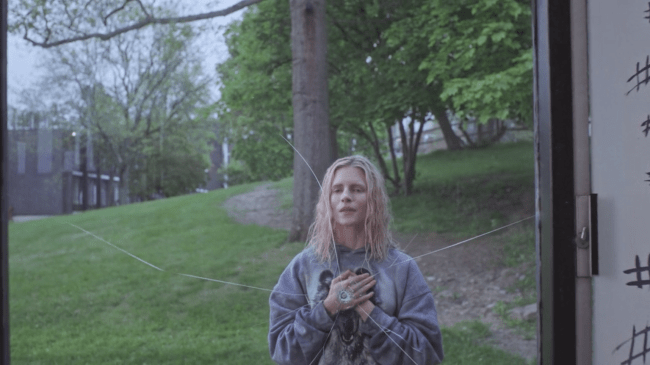 We see her rushed to the hospital, and for a moment, she’s simply a silly woman who got shot and whose “plan” didn’t work. The episode then ends with OA awakening in a mysterious white space. Has she been institutionalized? Or did she make it to where her fellow captives are? Or both? At the very least, the show is leaving us with the idea that either could be true, and it’s a mystery that has to wait to be unraveled in a new season. Either way, we remain firmly on OA’s side. We want her to be right. We want her to succeed.

Brit Marling’s work is compelling, because it is so fiercely and unapologetically feminine, forcing the viewer to examine the ways in which women are stripped of their agency and not believed, particularly when they are powerful and develop a following. It seems that the more attention a woman gets, the more people want to tear her down…because we can’t have women leading anyone. We certainly can’t take female leaders seriously. If a woman achieves power at all, it’s because she’s a liar, or because of her looks, or because she’s “playing the woman card.”

Except that in Marling’s work, the female protagonists are actually powerful, speaking truth to power regardless of the punishments that befall them; asserting themselves even when the world tries to dismiss them. Their stories are deemed important, and their word is always enough.